Looking for the best tips for training a puppy so that it grows into a mellow dog?

Or maybe you just want to make sure your dog doesn’t become aggressive as he grows up?

Either way, we’ve got you covered!

Today, we’re going to talk about what to do (and NOT do) if you want to set the groundwork for a mellow dog!

Let’s check it out! 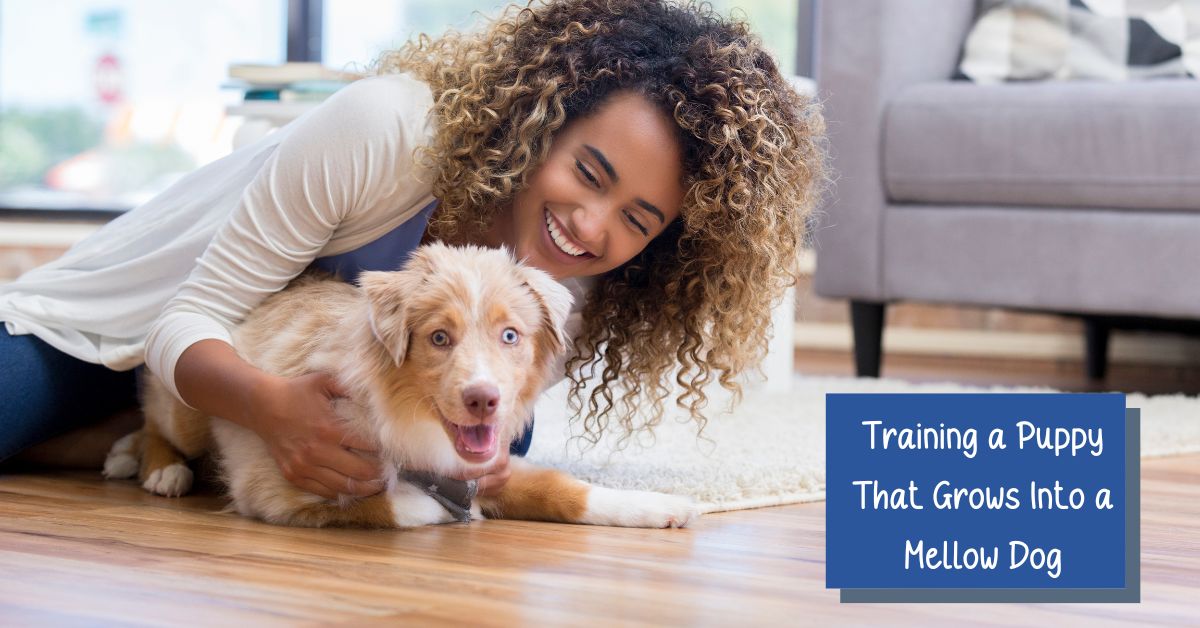 Training a Puppy That Grows into a Mellow Dog

My dog and I go for walks in the dog park almost every day, so I often overhear people complaining about their pets’ behavior:

Sometimes I get very frustrated at such remarks because some owners still do not get that their pets’ behavior is the direct result of their actions or inactions.

A dog doesn’t bite, growl, or act aggressively on a whim. There is always something going on – an illness, behavior problem, or inappropriate training.

However, rarely one wants to have an aggressive dog or a dog that turns the house into a mess, right?

If you’re reading this article, you’re one of those owners who want to do the best for their puppy.

Many articles focus on how to welcome the puppy home or how to house-train him, but I’ll look at the problem from another angle.

So, today we’re going to talk about seven tips to raise a mellow dog.

If you’re reading this article, you’re one of those owners who want to do the best for their puppy. 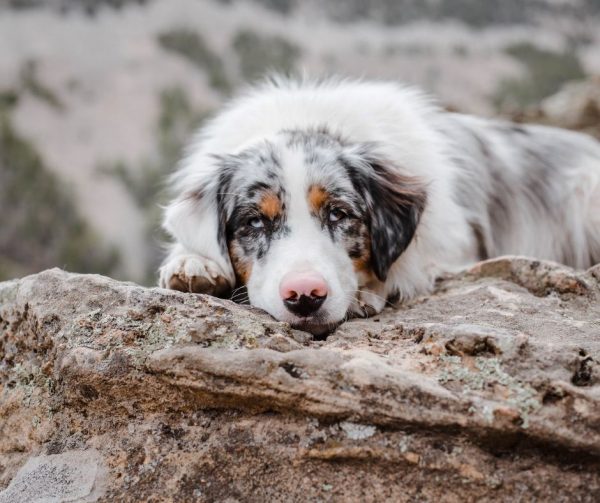 This is one that you need to do BEFORE you even adopt a dog, so if you’ve already brought home a new furry friend you can skip ahead.

Too often-especially in our highly digital age of social media- people choose dog breeds for all the wrong reasons. They choose an “Instagram-worthy” dog, a breed that their favorite celebrity has, or just a trendy designer mix that everyone is talking about.

In other words, very little actual research goes into the process, and that leads to major problems down the road. More dogs end up in shelters because someone adopted a breed that they’re just not equipped to handle.

My advice is to research the temperament of the breed you want and make sure you’re up to the task.

See what other owners have to say, read what to expect about the breed’s personality, trainability, and typical behavior traits.

Also, don’t be deceived by size. Some small dogs are vicious nippers and can be more challenging to train than some of the huge ones.

All of that said, even dogs from breeds known for hyperactivity can learn to be relatively mellow. Maybe they’ll never be total couch potatoes, but you can teach even the zaniest high-energy Husky to chill out when necessary.

The most important job you have as a puppy owner is to make sure that your cute pooch is exposed to different people, objects, scenes, and so on.

You’ll need to start very early on, during a time when where the puppy is still curious about the surrounding world and not suspicious of new things and experiences.

It’s a crucial moment in the dog’s development because an unsocialized dog might be terrified of trivial objects like trash cans and or react badly towards people wearing hats, for example.

Also, socialization is necessary if you want a puppy to get along well with kids, other dogs, and cats. So before you even begin obedience training, make sure your dog has a solid socialization foundation. Check out the video below to learn more:

Don’t ever listen if anyone tells you that a puppy won’t need basic obedience training. They don’t know a thing about dogs.

Obedience training is not just about teaching the impressive tricks you see dogs perform on TV. It’s essential for the well-being of your dog, not to mention essential to raising a mellow dog.

Don’t think of it as trying to dominate your dog (more on why that’s wrong in a moment) or teach him who is “boss.” Think of it more as teaching your dog what you can expect from each other as companions.

Obedience training is kind of like a contract between you and your dog in that sense. For example, when you potty train your pup, you’re saying “You agree not to pee on the carpet and I agree to make sure you have a way to get outside when you have to go.”

How does this help you raise a mellow dog? Think about it, it’s a whole lot easier to be mellow and relaxed when we know what to expect.

Throughout all of your training sessions, project a relaxed manner, your pet will mimic your calm behavior and grow to be a friendly, confident fellow. You can help things along by rewarding your puppy when she is calm.

#4 Use Positive Reinforcement Only (NEVER Punish)

It’s important to focus on positive reinforcement (also referred to as reward training) only, especially if you want a mellow dog in the future. Never yell at your dog or hit her. Not only is it abuse (and yes, it IS abuse, full stop), but it’s also the fastest way to turn your sweet new puppy into a neurotic and potentially aggressive adult dog.

While you’re at it, ditch this whole idea that you need to be a “pack leader.” We’ve learned so much in recent years about the right and wrong ways to train a dog. Among them is this bizarre idea that dogs and wolves are the same creatures. They’re not.

Your dog doesn’t need you to be the “alpha.” As dog-training expert Pat Miller writes, “Life with your dog shouldn’t resemble some sort of dystopian boot camp. Mutual respect based on clear communication and kindness set the stage for cooperation and peace.”

I say “consider” because not everyone feels that crate training is a necessity, and both sides offer valid points. So, if it’s not something you’re willing to do, don’t feel like you can’t raise a mellow dog.

That said, whether you use a crate or some other way to get the point across, it’s important that your puppy know that there will be times when you won’t be

Otherwise, you’ll have her running around the rooms all day and night and whining/barking when you leave the house.

The crate will be a den for your puppy where she can nap, rest and hide from the hustle and bustle of the rest of the house.

You will send the puppy to his “den” when you see that she is getting overexcited and teach her to “chill.”

#6 Nip Biting in the Bud

Young puppies often bite during playtime because they are used to playing rough with their siblings.

However, this is not a trait you should encourage. So, if you want to train your dog to be mellow, you need to teach Lola bite inhibition.

For example, when Lola bites you, let out a bit of a “yelp” and stop playing with her. Then, swap out your hand for chew toys to redirect her biting to something more appropriate.

She will come to understand that biting equals no more playing with you and will eventually stop doing it.

It’s important to teach your dog bite inhibition by about 4 months of age. Letting it go on any longer than that is just asking for trouble when those adult teeth come in!

Check out the video below for expert tips on teaching Lola not to bite:

# 7 Do not encourage guarding

People often think that a puppy growling over a toy, bone, or dog food dish is “cute.” Well, it won’t be so adorable when Lola grows up and continues to protect her “stuff” fiercely, right?

You have to put an end to any guarding behavior you observe as soon as possible. Teach your puppy to “trade” the guarded object for treats.

If the guarding becomes extreme, though, you may want to contact a professional dog trainer for a little extra help.

A bored dog is a dog very likely to get into trouble. But a tired dog is a happy, mellow pooch! So, make playtime a part of your daily routine!

Provide plenty of physical and mental stimulation during the day and you’ll all have a more restful night.

Even just going for an evening walk or playing a quick game of fetch together can help get your pup’s energy levels under control before going to bed. Puzzle toys are great boredom busters, too.

Raising a puppy is such a big responsibility, similar to raising a child. Your actions determine what kind of dog your puppy will grow up to be.

In some cases, genetics do play a role, but as long as you bring a puppy properly and take the appropriate measure to counter any unwanted behavior, you’ll raise a mellow dog content with her life.

What do you think about these tips for raising a mellow dog? Do you agree with them? What would you add to the list? Leave us a comment.