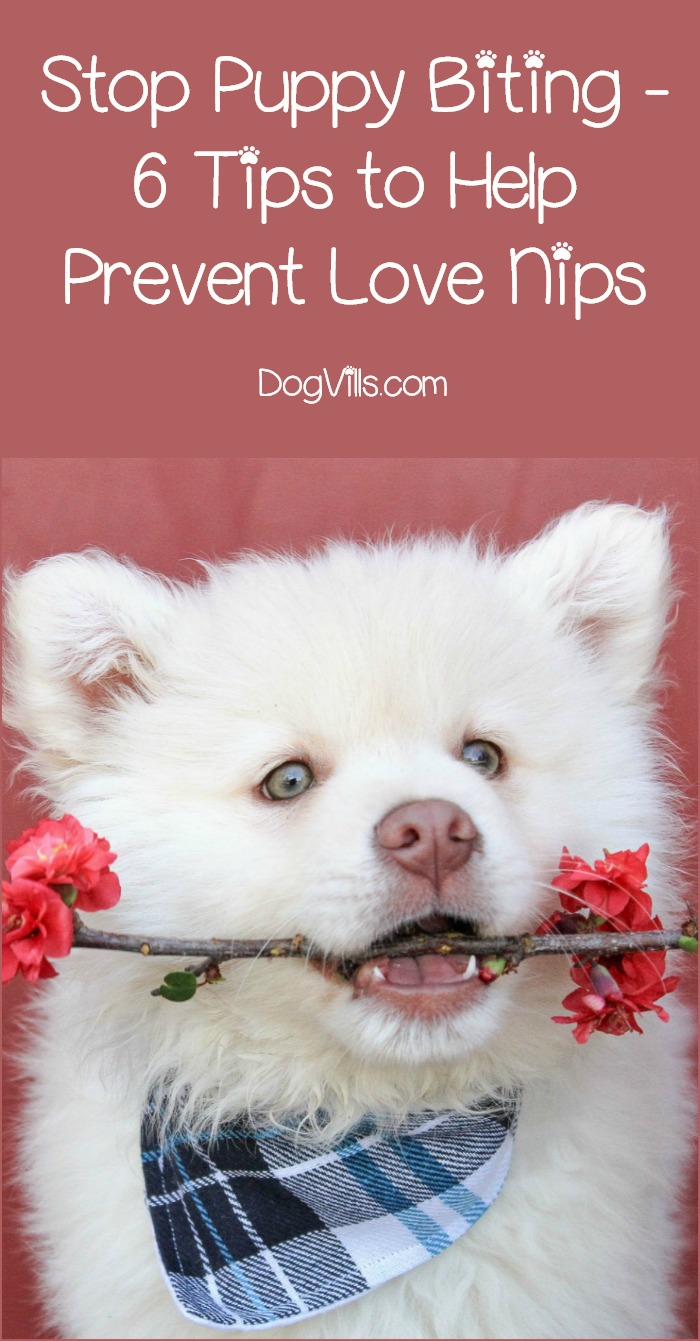 Stop puppy biting to keep your hands, and your visitors’ hands, safe from teeth during puppyhood and beyond. The thing about puppies and their tiny little teeth is that they are just so darn cute. It’s hard to resist the urge to let those little love bugs love us with their teeth. BUT not only is it painful when those tiny little puppy daggers hit, it also sets up a pattern of behavior that lasts into adulthood. And while we may understand that our adult dog is just playing, other people may not, which can lead to misunderstandings. These misunderstandings can lead to everything from minor abrasions to inadvertent bites and litigation. That’s why it’s so important to stop puppy biting as soon as possible.

How to Stop Puppy Biting

If your little pal is also a little nipper, it’s okay. That’s a natural instinct of puppies – and dogs in general, really. Dog’s don’t have hands. They can’t grip and tickle and do all the things that humans can do when they play. They only have their mouths, which means the only thing they can do when they play is bite. It’s both a way of getting the party started and a natural instinct which prepares wolves in the wild to tustle when they need to. That being said, it can’t be allowed to continue or encouraged. Our dogs aren’t wolves. They’re furry family members who have to interact with other animals and people, and in today’s climate especially, that means that they have to behave. So let’s take a look at how to stop puppy biting.

1. Stop it Before It Starts

One of the best ways to stop puppies from biting is to prevent it altogether. You may not like this next part, but it’s one of the best ways to stop your puppy from biting. Don’t play with them with your hands. Wrestling around with your puppy with your hands is an open invitation to biting. Instead, use a toy. Ropes are great for playing tug of war, and balls and other squeekies make excellent fetch and mental stimulation tools.

2. Stop Playing When the Mouthing Starts

If while playing, your puppy puts his mouth on your hands or body, immediately stop playing and move away. Do this every single time he begins mouthing you or biting. Over time, he’ll learn that when he tries to bite, the fun stops. He is more interested in play than play biting, and he’ll get the idea pretty quickly.

Many puppies, especially herding breeds have a natural instinct to nip at their owners when they move. This is a bred-in instinct from back in the days when raising herd animals was far more commonplace. In order to stop the nipping, you have to stop. As soon as you feel your puppy mouthing or nipping, stop moving. Don’t move until he removes his mouth. After that continue on. Do this every time he attempt to nip you, and eventually, he’ll learn that the only way to keep you moving is by not biting you.

There is a common misconception out there that in order to stop puppy biting we have to scream or cry like our puppy’s litter mate in order to teach the puppies that they’re hurting us. On its surface, this seems like a great idea, but remember this: prey also scream when attacked. All dogs have a built in prey-drive to one degree or another, and when you pretend to be hurt, you’re actually stimulating the bite response.

If your puppy is particularly mouthy, it’s best to not engage in any form of wrestling. It’s tough, but it’s one of the best ways to stop puppy biting. Remember, when you act like a dog, they’ll treat you like a dog. What that means if you have a puppy who is exceptionally bitey is that you’ll send him mixed signals about that urge to nip and gnaw.

I worked at a vet for seven years, and I had a lot of experiences with a lot of dogs. One experience comes to mind that is perfect for this issue. There was an absolutely GINORMOUS Old English Mastiff named Andre – as in The Giant – who loved to wrestle, and part of wrestling is what? Yep. Nipping. Well, Andre was 180 pounds of pure love, but he was also 180 pounds of pure muscle. He would always go for my hands and arms. My ENTIRE hand would be in his mouth, and while he was very gentle, if I hadn’t known him, it could have led to some issues. In fact, his exuberance actually scared a few clients and their pets.

This is a perfect example of why it’s important to stop puppy biting as soon as it becomes an issue. Andre was the sweetest dog in the world, but when a 180 Mastiff is running at your with an open mouth, it can be intimidating at the very least and horrifying at the worst. If you’re on the fence about the need to stop puppy biting, remember that not only is it for manners, it’s for safety as well.

Did you successfully train your dog to stop play biting? Share your favorite tips below!