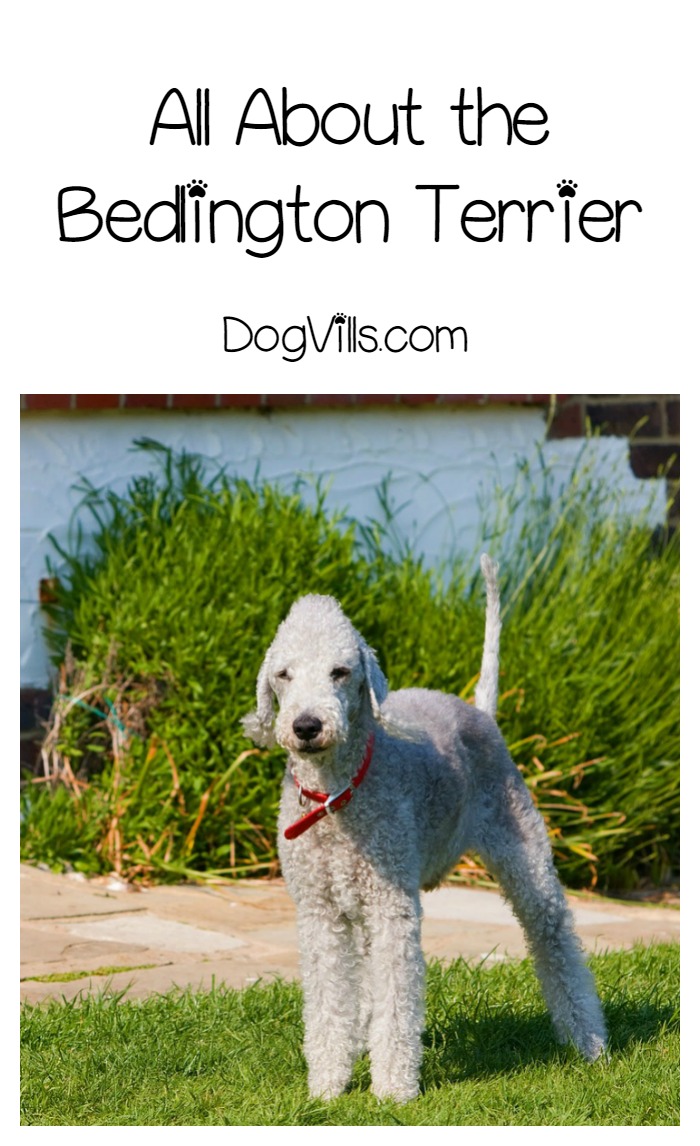 The Bedlington Terrier is one of the most recognizable breeds around, but is he a hypoallergenic dog breed?  This little guy has been referred to in the past as a lamb because of his curly coat, but he’s not a complete softy. In fact, the Bedlington Terrier has his roots as a ratter and a particularly scrappy one at that. These days, he’s a show dog and companion animal. Let’s take a look at the breed.

The Bedlington Terrier is an interesting breed. Back in the day, the breed was a scrappy ratter and hunting partner. These days, he’s a show dog and family companion.

Here’s an interesting tidbit. The first officially named Bedlington Terrier was Young Piper. Known as “the best of his race,” Piper began hunting badgers at eight months of age and continued hunting vermin until he was blind. He is best known for saving a child from a pig, holding the animal at bay until helped arrived.

Although their poofy coats are often described as resembling a lamb’s coat, the coat of the Bedlington Terrier is by no means soft and fluffy. In fact, it’s been described as having a linty texture. His coat is made up of soft and coarse hair which lends itself to an almost softly crunchy feel. Their coats come in blue, olive, or sandy color, all of which may have tan points.

This is where the breed becomes so interesting. He’s a shining example of how breeding can change a personality over the years. Old school Bedlingtons were known to be courageous scrappers, eager to fight with prey and jealous of other dogs. One owner says that “this dog was about fit to kill any other dog of his weight.”

Today’s Bedlington Terrier is far different. Both the AKC and ASPCA recognize the breed for his mild and gentle nature. He’s known to be intelligent, loving, and good with kids, as well. Be aware that the breed is stubborn, and previous experience along with a metric ton of patience is required. He absolutely loves his family and adores being the center of attention. Although he’s known to be gentle, it’s still important to adequately socialize him.

The Bedlington Terrier has an average lifespan of around 13 1/2 years, which isn’t bad for a dog of his size. Although the average life expectancy is 13 1/2 years, the longest-lived of the breed was reported to have died at over just over 18 years of age.

As far as overall health goes, they are a decently healthy breed. The only two things that really detracts from their health status is a disease which about 5% of the population gets call Copper Toxicosis and kidney problems. If they manage to dodge those bullets, Bedlington Terriers can have decently long lives without too many issues. Health issues include:

Anything beyond a nice walk or a vigorous game of fetch or tug of war is purely optional for this breed. Although they were formerly ratters and poaching companions, these days, the Bedlington Terrier is content to sack out on the couch with his family.

If you’re showing your Bedlington Terrier, be prepared for frequent and expensive grooming session to keep his unruly coat in line. If your guy is a pure pet, opt for a standard grooming cut every 6 to 8 weeks, and save yourself the headache of constant brushing, plucking, trimming and what not. These guys are hypoallergenic, which means no shedding, which is always nice.

Here is a 101 video about the Bedlington Terrier:

Bedlington Terrier – A Bundle of Energy. Or Not…

Although his formative years saw the Bedlington Terrier as a feisty, scrappy ratter, Hunter, and poaching companion, these days, he’s an excellent family dog for just about any lifestyle. He enjoys being trained in agility or simply laying around on the couch with his people. Just remember that this breed is a stubborn one. If you don’t have previous experience with dog training, this is not the breed for you. If, however, you have previous training experience and a moderately deep well of patience, the Bedlington Terrier can make an excellent addition to your family.

As always, make adoption your first option. While you’ll almost certainly never find a Bedlington Terrier in your local shelter, you might find a breed specific rescue site online. If you do, the chances are good that you’ll find a little guy or girl who would make the perfect addition to your family.

Do you have one of these hypoallergenic dog breeds? What do you love about the Bedlington Terrier?