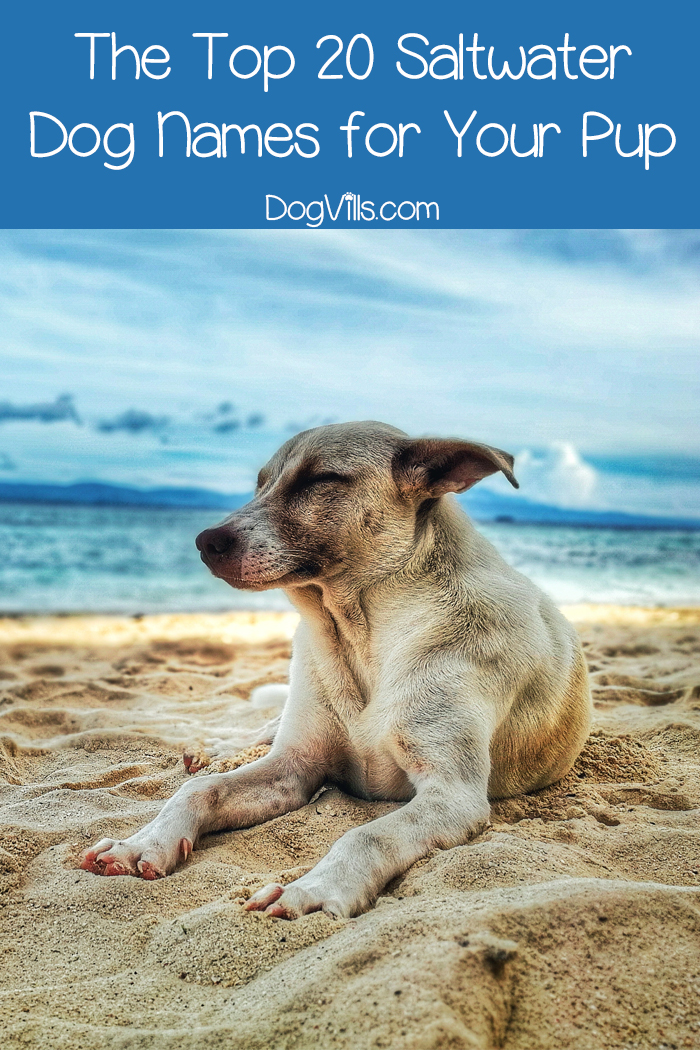 Saltwater dog names are a fantastic way to go for beach lovers and seaside dwellers!

The ocean and marine life can often hold a lot of inspiration when it comes to choosing a name for your puppy.

From marine related dog names to tropical monikers to cute ideas for fishers, we’ve got you covered!

Read on for my favorite nautical and saltwater inspired dog name ideas!

Related: Top 500+ Dog Names to Help You Find the Perfect Moniker for Your New Pup

A marina is a place where people will dock and launch their boats into the ocean, but it’s also one of my favorite nautical themed dog names for females.

, but it is also related to the sandy beaches that the ocean waves lap against.

Isn’t this just one of the best beach dog names for a female pup? I am picturing a Golden retriever when I hear the name, but it works for any breed.

If you want a unique name for your dog, then choose Azure. It is often a shade of blue that is used to describe the depths of the oceans below the boats.

’, so it only makes sense to use it as a name for a female puppy.

Pearls are little white stones that are produced by an oyster that rests along the bottom of the ocean, as well as making some beautiful jewelry

It’s also a fabulous old-fashioned name for a dog!

Brizo is an interesting one for this list as it comes from Greek mythology, as Brizo was the goddess of protection for sailors when they were out at sea.

It’s one of my favorite unique nautical themed dog names because, like the goddess, dogs are passionate about protecting their families. Even when that family is out to sea!

Keeping with the Greek Mythology trend, I have chosen to add the beautiful name that is Nerissa to this list, as she was a Greek sea nymph.

ThinkBabyNames explains that it also can mean “black haired,” making it a great name for your dark-furred dog.

has been used in a Disney movie, but it also means ‘deep ocean’ in Hawaiian, making it one of the top tropical dog names.

Of course, the Disney movie tie-in will also make it a hit with your children!

Atlanta may sound more like a southern Country music name than an ocean-themed dog name, but it’s really quite nautical.

It is a reference to the both the Atlantic Ocean and the mythical Atlantis. If you want to give it a bit more of a saltwater kick, toss an “i” in there and go with Atlantia!

(and many years later, her own movie Finding Dory

Like Moana, this one will definitely be a hit if you have young children!

Ray may seem like a regular name, but in this, it is in reference to Manta Rays, which live in the ocean.

It’s also one of the best fishing related dog names, as Ray Scott was a famous fisherman!

Poseidon is a strong name and is best known as being the Greek god of the Sea, having been portrayed in a number of movies and works of art.

If you want a name that fully encompasses the ocean, then Brine is a great choice. Brine is actually the foam of a churning sea, so it is perfect for your little puppy.

There are a lot of different mythologies in the world and even Ireland has their own. Lir is the Irish God of the Sea and the name is extremely unique.

The Greek and Roman gods are very similar. While the Greeks have Poseidon, the Romans have Neptune, the god of the sea.

Personally, I love this name because it truly makes me think of the ocean.

Something that I like about Wade is how normal it sounds, but it actually means to move through shallow water and makes me think of all those days spent at the beach.

While Caspian is a character from the Chronicles of Narnia

, it is a name that you can choose for your dog after the Caspian Sea.

A simple name, but one that is peaceful and offers tranquility, much like the deep blue ocean itself. Blue is also the name of a popular dog from the children’s show ‘Blue’s Clues’.

Gilligan is a fabulous ocean-themed name for a goofy dog (like a Lab)! It, of course, comes from the old TV show, Gilligan’s Island.

He was the First Mate on the SS Minnow, a charter ship that went on a three-hour tour and ended up getting lost at sea.

A Marlin is a large saltwater fish, but I think that it would also be a great name for a male pup that is unique.

There are a lot of different and strange names on this list that all relate to saltwater in some shape or form.

To me, they are all ones that I would personally use for my own puppy, whether they are male or female. If you happen to have a love for being close to the ocean, then be sure to choose one of these.

Out of them all, which of these saltwater dog names would you choose?