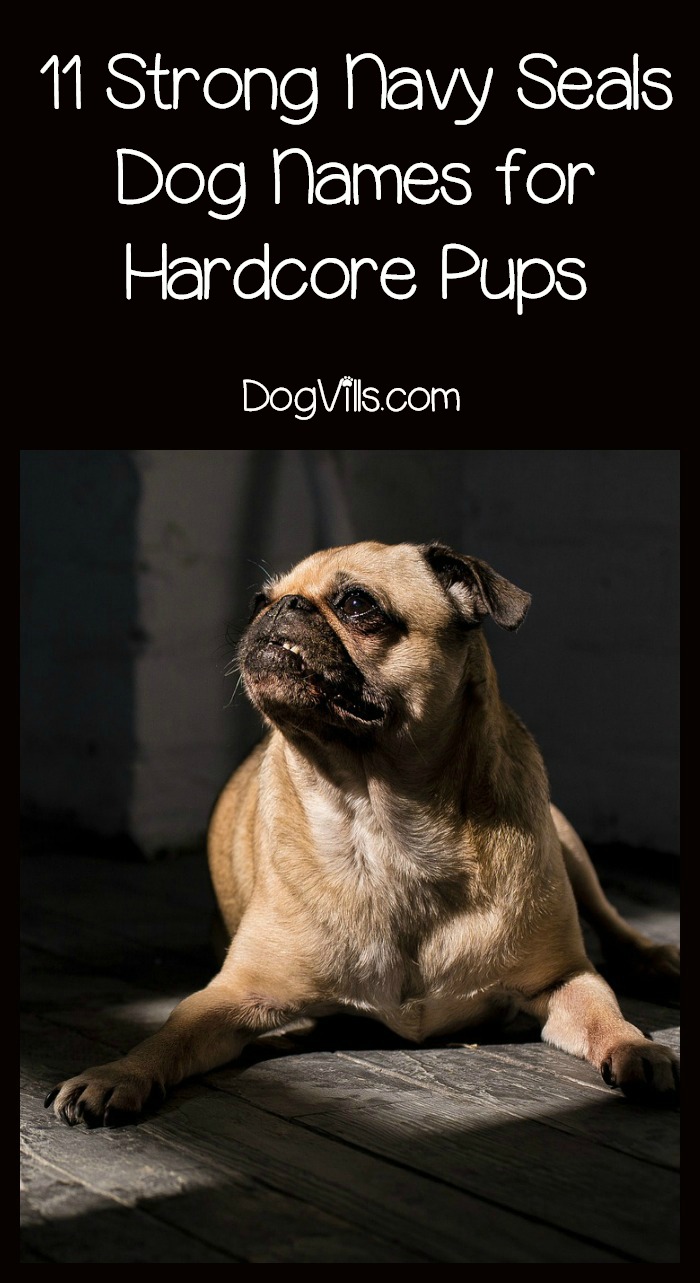 We can’t think of anything tougher than these 11 awesome Navy Seals male dog names!

The Navy Seals are the U.S. Navy’s Sea, Air and Land Teams, which are part of the Naval Special Warfare Command. They are the main special operations force of the U.S. Navy and wow, are they tough!

If you are looking to name your male dog after a famous Navy Seal, you have come to the right place.

Check out our favorite names plus a little background on each Seal!

James F. Cahill (1926-2008) was a Lieutenant during World War II and the Korean War. He was part of the initial class of the U.S. Underwater Demolition Team. Cahill was also a retired Salem Harbormaster in Boston, Massachusetts.

Cairo, a Belgian Malinois war dog, who was part of Operation Neptune Spear, the mission to take down Osama bin Laden in Pakistan, on May 1, 2011. Cairo’s job was to detect hidden threats within the compound and alert the team if dangers were found.

Chris Cassidy (born in 1970) was a Captain and NASA astronaut, serving as Chief of the Astronaut Office. He was the recipient of several awards and medals including the Presidential Unit Citation, the NASA Exceptional Medal and the Afghanistan Campaign Medal.

Larsen Jensen (born in 1985) graduated in 2011, at the top of his class, from the U.S. Navy Seal training program. He is also a former competition freestyle summer, winning two Olympic medals. He received the Silver at the 2004 Summer Olympics and the Bronze at the 2008 Summer Olympics.

Chris Kyle (1974-2013) was a Seal sniper, serving 4 tours in the Iraq War. He wrote a best-selling autobiography, American Sniper, in 2012, which became the subject of the 2014 movie, American Sniper.

Marcus Luttrell (born in 1975) is a retired Hospital Corpsman First Class. He is the recipient of the Navy Cross and the Purple Heart for his actions in Afghanistan, as part of Operation Red Wings, in June of 2005.

Michael Murphy (1976-2005) was a Lieutenant who was killed in the line of duty, on June 28, 2005. He received the Medal of Honor, the highest decoration in the U.S. military, for his actions during the War in Afghanistan.

Thomas R. Norris (born in 1944) is a retired Lieutenant, who was a Seal Advisor, as part of the Strategic Technical Directorate Assistance Team. He received the Medal of Honor for his ground rescue of two pilots in 1972, during the Vietnam War.

Eric T. Olson (born in 1952) is a retired Admiral, who served as Commander of the U.S. Special Operations Command. He was the first Seal to earn a four-star flag rank.

I love the name Cairo, especially since it actually belonged to a military dog! Murphy is also a super cool Navy Seals male dog name, don’t you think?

Would you give your pooch any of these Navy Seals male dog names? What are some of your favorite strong, military-inspired dog names? Share below!