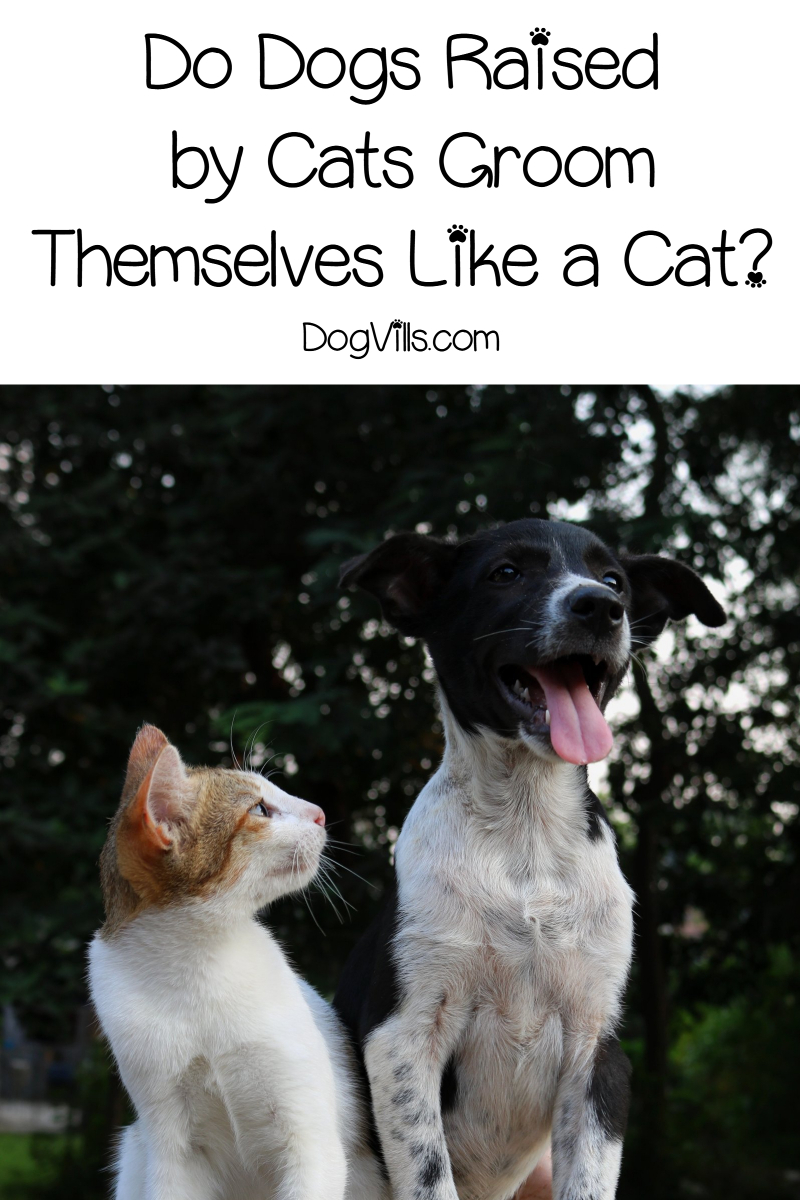 Recently, somebody asked me if a dog raised by cats will grow to groom itself like a cat.

It’s sounds like an odd question but it’s definitely an interesting one!

Plus, I bet anyone who has to groom an uncooperative dog wishes their pup would just groom themselves, right?

But is it possible?

Before you go out and get a few cats to help teach your pup some grooming skills, read on to find out the answer!

If a Dog is Raised by Cats Will it Groom Itself Like a Cat?

Puppies should remain with their mother until they are at least eight, preferably 12 weeks of age.

However, sometimes the mother dies, or the little ones get separated too early.

Fortunately, some cats have shown willingness to take care of the orphaned young ones.

But will the puppy grow up mimicking the cat’s behavior and act like a proper cat? Let’s find out.

Will a dog raised by cats act like a cat?

First, dogs and cats are two different species, each with its hard-wired instincts. That’s why a dog raised by cats will not start to meow, but it will still bark.

However, young puppies rely on their mother to teach them how to act appropriately.

So, in the absence of a mother or another dog, a puppy might copy some of the behavior it observes from his fellow cat family. This phenomenon is called social synchrony.

While it’s cute to observe a dog who thinks that he is a cat, I can’t stress enough the importance of keeping young puppies with their mother or providing a proper role model.

Early separation might result in future behavioral problems and attachment issues because a mother dog:

A mother cat might provide the care a young puppy needs, but a puppy needs other dogs to learn proper dog behavior.

Just imagine what would happen if your puppy bites you the same way your kitten does.

What’s more important, puppies who don’t know how to control his bite strength might accidentally injure your cat and kittens during play time.

That’s why you should introduce your puppy to other dogs and take him to the park to socialize with others of his kind.

A young puppy growing up with kitten will certainly try to copy the way his “siblings” are grooming themselves.

However, such behavior will probably be short-lived and won’t carry into adolescence.

For one, a puppy is not as flexible as a kitten, and as the puppy grows bigger, it will get harder to reach all those places.

In addition to this, cats and dogs are “wired” differently when it comes to hygiene.

Don’t get me wrong. Dogs are not dirty animals, but they are not as obsessed as cats when it comes to being clean.

What’s more, for cats, licking is more than keeping their coats spotless.

Our feline friends lick themselves when they are anxious, stressed, confused, and scared because it feels good and brings back memories of being a kitten.

Just think about how your cat keeps his fur clean and how your dog does it. You’ll realize that while dogs groom themselves regularly, they don’t have the same long cleaning ritual as cats.

So, even if cats raise a puppy, I don’t think he will have the patience to lick himself as a cat or the desire to do so.

Why is my dog licking itself excessively?

If you observe that your dog grooms itself like a cat, I would say that you might have a problem that requires a visit to the vet.

Because dogs lick a part of their bodies excessively when they are in pain.

For example, if I see my dog licking its paw for more than a few minutes, I would check immediately for bites, wounds, or scratches.

Other possible reasons why a dog grooms excessively include:

If you notice that your furbaby is licking itself more than usual, you should go ahead and speak with the vet.

Not to mention that some conditions like ringworm are contagious to human too.

A dog can act like a cat, but it’s highly unlikely that it will grow to groom itself like a cats.

However, if your dog has always been a fastidious groomer, it’s nothing to worry about.

What do you think about this topic? Have you ever seen a dog raised by cats groom like a cat? Share below!