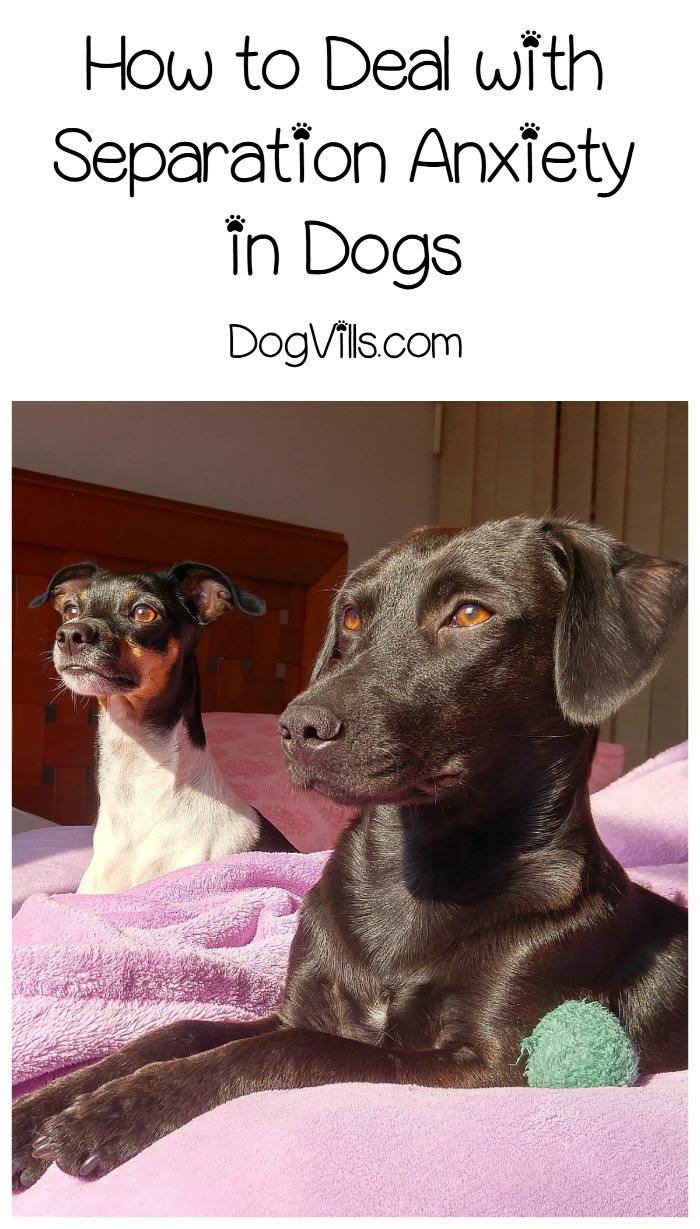 Separation anxiety in dogs is a very common problem.

Although it’s typically seen in small breed and lap dogs, almost any breed can suffer from this problem.

I’ve covered anxiety in the past, but it was an overview on general anxiety.

Although that can be a problem, as well, separation anxiety in dogs can be the worst of all forms of anxiety because it can lead to incredibly destructive and disruptive behavior.

I decided to tackle separation anxiety specifically in this post after I came across a post in one of the forums about an owner with a 4-year-old dog suffering from severe separation anxiety issues. Although 4, the dog still behaves like a puppy in full freak out mode when his owners are away, doing everything from chewing up toys and objects to urinating all over the house.

This dog is a prime example of the destructive, disruptive, and incredibly frustrating behavior that comes with separation anxiety in dogs.

So let’s take a look at separation anxiety, what causes it, and what to do about it.

Everything You Need to Know About Separation Anxiety in Dogs

I’m hopeful that by the end of this post, you’ll have a better grasp of separation anxiety and how to deal with it should your dog have it.

It’s a tough problem to tackle, and unfortunately, I heard many people at the vet say that if they couldn’t get it fixed, their dog would be going to a shelter.

So let’s figure out how to stop this behavior.

What is Separation Anxiety

Just as the name implies, separation anxiety in dogs is anxiety caused by being left alone. Just like wolves, dogs are pack animals, but unlike wolves, dogs have been conditioned to rely heavily on their “pack” – the humans in the home – for their emotional well-being as well as their physical well-being. While many dogs are right as rain being left alone for a few hours, some dogs absolutely freak out. The best way to describe it is to think of the thing that scares your dog the most, and then have that happen constantly and consistently over a period of an hour or two. That is essentially what separation anxiety is.

Separation anxiety in dogs is caused by the perfect storm of a dog’s inbred pack mentality coupled with an extreme love and/or reliance on his owner. It can sometimes occur in rescue dogs who have had particularly rough goes. In these cases neglected or abused dogs latch on to their owners because they’re the first humans who have ever really given them sold emotional and physical support. So when their masters leave, the dogs go into an emotional death spiral of fear, loneliness, and panic.

Separation anxiety can also occur in otherwise healthy dogs who have never been abused at all, as is the case of the owner who posted their question I mentioned earlier. The owner has owned the dog since he was 6 months old, and in the 6 months that he was not with the family, he suffered no abuse. In these cases, separation anxiety is caused by the dog’s extreme attachment to his people. It’s an overactive pack instinct that sends him into an extreme state of panic when it’s taken away from him for even short periods of time.

Another cause of separation anxiety in dogs can be an extreme generalized anxiety, or being high strung, as it’s normally called. I had a Maltese named Odie who fell into this category. He was perpetually on edge. Whether it was noise outside or a person in the home moving or nothing at all, Odie was always on full alert and never EVER restful. In addition to all of that he went into a full on freak out if we were even in another part of the house for more than a few minutes.

The symptoms of separation anxiety in dogs can often be construed as intentional or even malicious, but that is absolutely not the case. All destructive behavior that comes from separation anxiety, or any anxiety for that matter, is completely beyond the control of the dog. They are physical symptoms of his mental distress.

How Do You Deal With Separation Anxiety in Dogs?

This is a big, big problem for a lot of owners, and unfortunately, there’s no easy fix. There are, however, some things you can try to help your dog if he suffers from this. There are really only two ways to deal with this issue, so let’s take a look at them.

For some dogs, desensitization can work. This involves slowly exposing your dog to incremental dose of what is bothering him. In the case of separation anxiety in dogs, begin by “going out” for about 5 minutes. Simply let your dog see you “leave” through the door and then wait for five minutes and come back in. Repeat this process slowly over the course of several days or even weeks, depending on how well your dog tolerates it, making the time you’re away progressively longer ever few trips. The ultimate goal is for you to actually go somewhere without your dog freaking out.

For some dogs, particularly those who have a severe generalized anxiety to begin with, medication may be your only option. In the case of my dog, Odie, his anxiety was so bad on every level, that we ended up putting him on Clomicalm. This drastically reduced his anxiety and allowed him to live a much more comfortable existence. And medication will be the answer for some owners. There are some cases of separation anxiety in dogs that are so severe, nothing works.

It’s OKAY to put your dog on a medication to help with his anxiety if it’s severe. It won’t change his personality other than allowing him to be more comfortable in his own skin.

Separation Anxiety in Dogs Can Put the Brakes on Your Life

But only if you don’t find a way to change it. For some dogs experiencing this issue, desensitization will absolutely work. For other dogs whose separation anxiety is a symptom of a larger, generalized anxiety, medication may be the option. Whatever the case may be, remember that separation anxiety in dogs isn’t their fault. Their brains are going haywire, and it’s up to us to figure out a way to stop it.

Have you ever gone through this before? Share your tips for how to deal with separation anxiety in dogs!