Curious if there are any small dogs that don’t bark often? Maybe you want a pint-sized pup, but you’re not really loving the idea of a yippy-yapper (like many small breeds can be).

In that case, you definitely don’t want my Lola! She is a Chihuahua, and she’s quiet all day until the doorbell rings, or my neighbor knocks on the door. Then she lets the whole entire world know she is there.

Don’t worry, though; there are some adorable small dog breeds out there that will meet your needs for them to, well, be small, and also mostly quiet. Let’s check them out, shall we?

Before we jump into these small breeds that don’t bark much, I just want to make something very clear. ALL canines bark. It’s how they communicate their wants, needs, and fears. It’s also how they alert us to danger. So if you’re looking for a 100% quiet pet, get yourself a fish.

One more note: the term “small dog” is a bit subjective. Everyone has a different idea of what constitutes “small.” For example, I think anything larger than my Lola is a “large breed.” My friend is a “big dog” person and thinks anything smaller than a Shepherd is a “small breed.”

So, for the sake of clarity, let’s go with a definition of 25 pounds or less OR under 18″. Sound good? Great. Enough chatting, let’s dive in!

We can’t talk about small dogs that don’t bark often without mentioning the Basenji front and center! He’s so non-yappy that he’s also known as the barkless dog. Now, that doesn’t mean he’s totally quite all of the time. In fact, he can be quite vocal. He just prefers to yodel instead of bark. Yep, yodel!

The Basenji is one of many dog breeds that originated in Africa.  While he’s not as pint-sized as a chihuahua, he still stands under 16-17″ and weighs about 22 lbs on average. So, he just barely fits the definition of small.

These sweet pups fly right down the middle lane on pretty much all traits. They’re good with kids…but don’t absolutely love them the way, say, a Goldie would. They’re affectionate without constantly demanding your attention and they enjoy playtime but can also go for a bit of downtime.

Fun fact: the Basenji is an incredibly clean and low-shedding dog that will groom himself like a cat! So, they’re perfect for someone who wants a quiet dog that won’t need constant brushing.

I have not heard of this guy before, and it turns out he is pretty rare in the US. He is sometimes referred to as The Puffin Dog, as he was originally bred to catch Puffin birds in the Norwegian islands (how cool is that?!)

Even his anatomy is very different. His neck bends almost all the way back! As you might guess, he has a thick coat to keep him warm in the cold Norwegian climate. He is quiet and loyal but can be quite stubborn!

Size-wise, he stands at about 15″ max (for males) and weighs in at 20-30 lbs. So, he’s a bit more stout than lanky. They get along fairly well with other pets, but the AKC recommends against keeping them around caged animals.

These adorable pudges make great apartment-living companions because they don’t bark much at all. On a scale of 1-5, with five being the yappiest, they only come in at about a 1.

Frenchies are sweet and charming pets that love to play with their people. In fact, they could play non-stop if you let them! This makes them wonderful small dogs for kids. They’re highly adaptable dogs that get along well with other pets, too.

They do well enough on their own and are content to keep your couch warm while you are away. These pups don’t require much in the way of grooming needs, either. The average Frenchie stands at about a foot tall and can weigh up to 28 pounds.

The Shiba Inu dog breed originated in Japan, where it remains the most popular companion breed. Some say his origins date all the way back to the Jōmon period, a prehistoric era in Japan that begin in roughly 14,000 BCE.

Shiba Inu dogs enjoy jogging and exploring outdoors, but they also make great indoor buddies as well. They’re independent, so if you’re looking for a pup that can do well on his own for a few hours while you work, they’re a good choice.

While independent, they’re also extremely affectionate. They get along well with kids and other dogs, too. Bonus: they’re easy to groom!

These dogs look like a fox, so beware when you are walking around at night! They should never be left alone off leash (or with you off leash!)  as they have a very strong prey drive. They’re runners, prone to darting off when they spot something.

Like the Basenji, while these dogs don’t bark a lot they DO vocalize. Instead of yodeling, though, they do something affectionately referred to as the “Shiba scream.” And yes, it sounds every bit as dramatic as you’d think! Fortunately, they really only let loose with those terrifying shrieks when they’re anxious, scared, or hurt.

This black and brown beauty has long floppy ears that make it look like he has long black hair! He is similar to the Cavalier King Charles Spaniel but not quite as well known. He is quiet and adaptable to any living situation, as long as he can be near you.

These sweet dogs LOVE everyone. They’re highly affectionate with their families, adore children, and get along with other dogs. They’re even fairly open to strangers.

English Toy Spaniels stand at 9-10″ and weigh only between 8-14lbs, making them truly small dogs that don’t bark often.

Every time I see a photo of a Chinese Crested dog, I can’t help but smile.  He has such a unique look about him! He is quiet, but he also prefers to be close to his owners at all times.

This quirky-looking fella doesn’t do well when left alone for long periods of time as he is a bit sensitive and prone to separation anxiety. If you fall in love with his look, be sure to have a few sweaters for him. As I’m sure you can tell, he gets cold easily as he is mostly hairless (unless you opt for his brother the Powder Puff type).

These handsome pups stand at just around a foot tall and weigh between 8-12 lbs. It goes without saying (but I’ll say it anyway) that they don’t shed much at all. In fact, they’re very good for people with allergies! They’re also fairly odorless.

I was on the fence about including the Cavalier King Charles Spaniel on a list of quiet dog breeds because they can -and will- become VERY big barkers in certain circumstances. For example, if they’re feeling lonely or neglected, they’ll definitely let you know.

However, as long as their needs are met, they’re pretty quiet overall. With their sweet doe-eyes, affectionate personalities, and super soft fur, they make wonderful lap dogs for senior citizens. They also get along well with kids and other dogs.

Cavs stand at just around 12-13″ tall and weigh between 13-18 lbs. As usual, males are larger than females.

The AKC calls this breed “a true Greyhound in miniature,” and they’re right. Like its larger “cousin,” the Italian Greyhound is fast, elegant, and incredibly affectionate…just on a MUCH smaller scale. These pups stand no taller than 15″ and weigh between 7-14 lbs.

As with the larger hounds, they’re fairly quiet dogs unless something freaks them out. Like the Shiba, Greyhounds are pretty well-known for their dramatic vocalizations (affectionately referred to as the “greyhound scream of death.”

The Glen of Imaal isn’t the quietest here by a long shot, but as far as terriers (which have a rep for being a bit yappy) go, he’s downright silent. Weight-wise, he falls well outside the “small dog” range, since he can weigh up to 40 lbs. However, Glens max out at 14″ tall, so they qualify in my opinion.

Like most terriers, these dogs are very affectionate with their family and older children but can be a bit standoffish with strangers and young kids. That said, they are less “excitable” overall than other terrier breeds.

What kind of dog doesn’t shed OR bark as much?

If you’re looking for a small dog that doesn’t shed AND is pretty quiet overall, go with the Chinese Crested. These nearly-hairless dogs are also hypoallergenic to boot!

Can a dog not be able to bark?

Yes, it’s possible for a dog to NOT be able to bark due to health issues, such as damage to the larynx. If your normally vocal pup suddenly stops barking, or if you think he should be barking but he isn’t, contact your vet to rule out any major medical problems.

What is the least vocal dog breed? 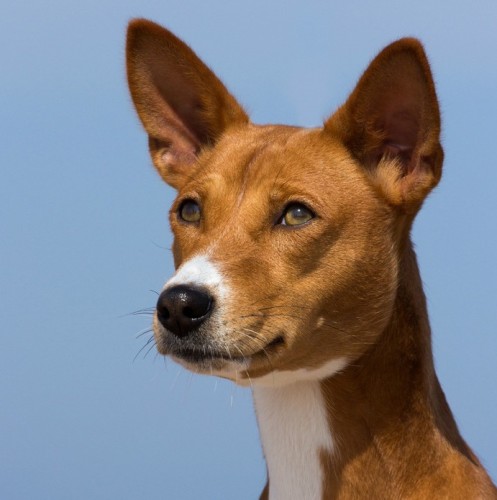 Most people would say the Basenji right off the bat since it’s actually known as the barkless dog. However, this is kind of a trick question, as vocalization isn’t the same thing as barking. That said, the Basenji still takes the price for the least vocal dog. Remember, though, “least vocal” doesn’t mean “totally silent.” He will yodel when he has something to say!

What kind of dog NEVER barks?

If we’re strictly asking about barking versus vocalization, the Basenji wins again. However, if you’re asking which kind of dog never, ever makes a single sound, the answer is none. Unless they have a condition that renders them completely mute, ALL dogs have some way of communicating through vocalizing.

Is it normal for a dog to not bark a lot?

Normal is completely subjective. Some dog breeds, like these above, are just quiet in general. Others may belong to a yappy breed but be rather stoic themselves. Only you know what’s normal for YOUR dog. If you notice that your Sir Barks A Lot is suddenly quiet as a mouse, contact your vet. Ditto for if you find that your strong silent type is yapping all night long. Any major change in behavior, including the level of barking, should be evaluated by a professional.

All dogs bark, it’s how they communicate, but there are some (as I have found for you) that are quieter than others. Unfortunately, small dogs have a bad rap for being yippy barkers. Let’s stop the discrimination against small dogs! On a more serious note, if barking does become a problem, there is some training you can do with him to help him to understand when it is ok to bark and when he needs to be quiet.

Are you the proud owner of any of these small dogs that don’t bark often? What breed did you choose for your family? Share your stories with the rest of us!