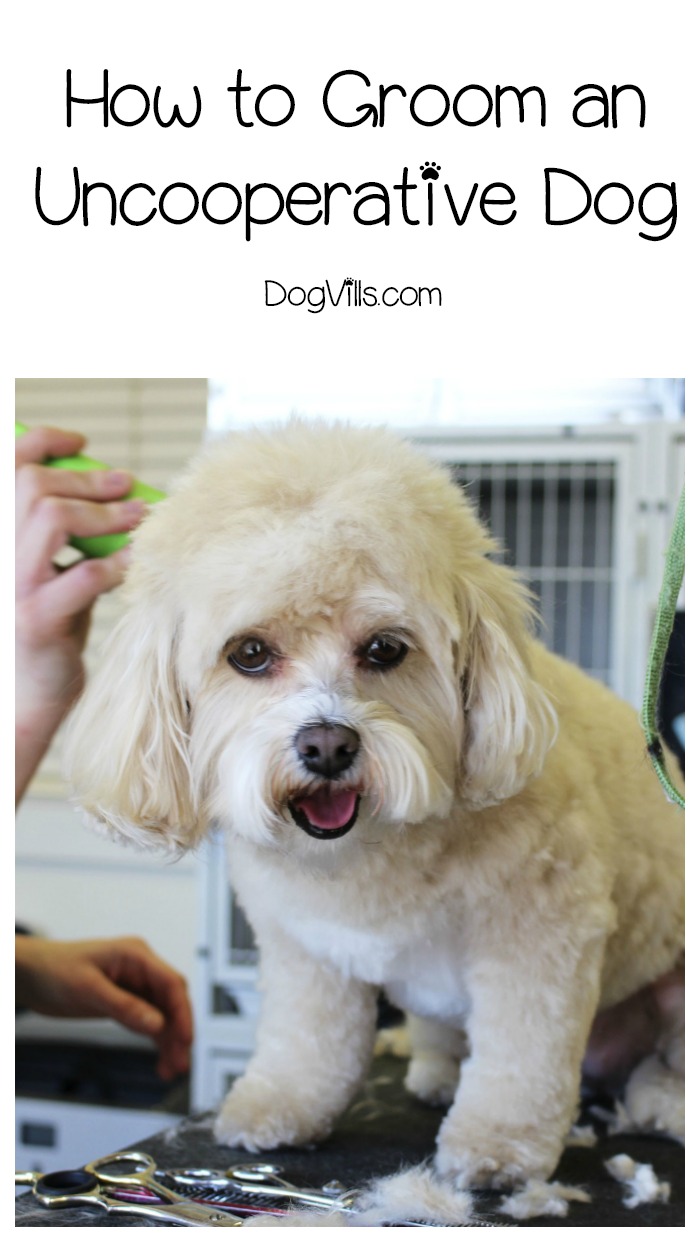 Knowing how to groom your dog can save you a lot of money.

In fact, it’s the route that many owners take these days.

There was a time when grooming your own dog was a scary proposition, but thanks to the internet, learning how to do it has become relatively easy.

It’s the implementation that can be difficult.

For many owners, grooming their dog is a simple matter, but for many more, it involves lots of thrashing and fighting.

It’s important to know how to groom an uncooperative dog, or better yet, make sure it never gets that far.

That’s what we’ll be talking about today.

How to Groom an Uncooperative Dog

Affiliate links included below. If you make a purchase through these links, we earn a small commission at no extra charge to you.

Before we get into the logistics of how to groom an uncooperative dog that becomes a thrashing, furry fish on the table, I want to talk about how to prevent that from ever happening in the first place.

Knowing How to Groom Begins at Puppyhood

Unless you’ve adopted an adult dog, the best way to ensure that your dog is well-behaved on the grooming table is to get him used to the process from a very early age.

Most owners know that it’s important to touch a puppy’s feet, eye area, nose, mouth, ears, rear area, and roll them over on to their backs so they’re used to all of that when it comes time to see the vet.

What most owners don’t realize is that the same thinking holds true for the grooming process.

From a very young age, you’ll want to begin holding their feet in the way that you would when you clip their nails.

In the same way, mimic the movements of cleaning ears and brushing teeth.

if you have a dog that requires a periodic clipping. Finally, let’s not forget the bath. Keep it fun.

Give your dog lots of treats while you do these movements.

For clippers, start by turning them on several feet away from your pup to see how he’ll react. No matter what his reaction, give him treats so he associates the clippers with something good.

Over a period of several days, gradually move the clippers close and closer to your dog, ending with actually touching your dog with the clippers.

Throughout the process, ensure that he gets lots and lots of treats. Do the same treat reward scenario for the rest of the grooming movements, as well.

Get your pup used to being bathed by simply bathing him. Again, lots of treats are key here. You want anything related to grooming to be a fun experience for him.

Related: Shower Heads to Help You Bathe Your Dog Without Breaking Your Back

Continue this routine daily until it becomes second nature to him that this is what you do. You want grooming to be a normal part of his life, not something to be dreaded.

You can begin grooming as early as you’d like. In fact, the earlier the better is best to ensure that he gets used to the entire process early on.

How to Groom an Older Dog Who Isn’t Having It

Getting an older dog on board with grooming can be a bit more difficult. I’ll warn you now, getting an adult dog used to the grooming process requires a lot of patience, so be ready for that.

It’s doable, it just takes a lot of time.

Begin in the same way that you would with a puppy. Touching and moving in all the ways that grooming requires, all the while giving plenty of treats.

If you’re reading this, chances are your dog is already quite against the idea of being groomed, so go extra slow and back off whenever he’s showing signs that it’s too much for him.

Slow and steady wins this race, so only go as far as he’ll let you, giving him treats all along the way.

As he becomes more comfortable with the process, take more and more time with what you’re doing, holding his paws, touching his ears, and mimicking the tooth brushing process for longer and longer periods of time.

Remember to tell him what a great job he’s doing and absolutely stuff him with treats.

It will take a long time, especially if he has a history of bad grooming experiences, but if you take your time and go extra slow, he should eventually come around to the idea.

I’m not going to lie, sometimes you can do everything right, and it still isn’t enough.

Some dogs just cannot get used to grooming. But don’t fret, even they can be cleaned up. If you’ve done everything you can, and your dog just can’t get used to being groomed, find a vet that also has a grooming area.

When I worked at my vet, we sedated several dogs for grooming for both their own peace of mind and for the groomer’s safety.

It’s not ideal, but it is relatively safe for most dogs, and it allows your pooch to be cleaned up with minimal stress.

Most of the time, you can get a dog to be a good boy for grooming if you know how. So follow these steps on how to groom an uncooperative pooch, and hopefully, you’ll have a great result.

Do you have any other tips for how to groom a dog that won’t cooperate? Share below!