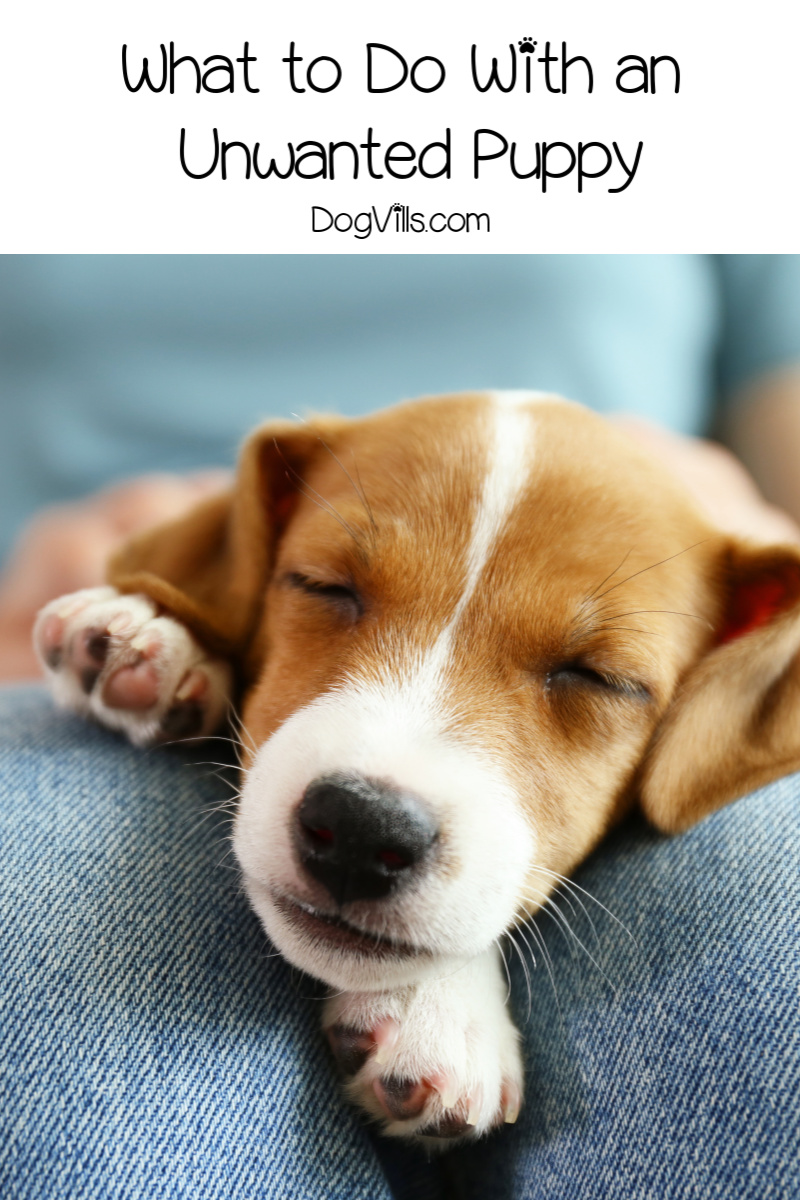 Are you wondering what to do with your unwanted puppy?

Adopting a dog can turn out to be far more challenging than you have expected, and you might be out of your depths.

So, today I’m going to give you some tips about what to do with your puppy if you’re considering giving up your pet.

What Should I Do With My Unwanted Puppy?

I’ve seen owners giving up their dogs for many reasons, such as moving house, allergies, not enough time, or too many expenses.

It’s a decision some make far too easily without thinking about how traumatized the puppy would be.

But, I’m not going to judge you for your decision because it won’t help the puppy. Instead, we’re going to take a look at your options and discuss what’s the best you can do.

It’s normal to have puppy blues for the first few weeks after you adopt a puppy.

You suddenly realize that you have to care for another living creature and that you’ll have to make changes to your lifestyle.

Moreover, puppies need time to adjust to their homes and might not be the bundle of joy you’ve been expecting.

Having to deal with a crying puppy all night can put you under a lot of stress and make you regret your choice.

However, things are going to get better once both of you adjust to the situation, and the puppy gets used to your presence.

Don’t be quick to label your puppy “unwanted” just because you’ve had several bad days.

Puppies aren’t soft toys and don’t deserve to be throw out if they don’t match your expectations.

You’ve weighed the pros and cons and decided that you don’t want the puppy. What are your options?

First, contact the place/person who gave you the puppy.

Usually, when you adopt a puppy from a respectable breeder or adoption organization, you sign an adoption contract, such as this one.

It’s routine practice to ensure that you won’t abandon the puppy on the street without a second thought.

Such a contract might specify that you should return the puppy to the breeder/organization if you don’t want it anymore.

Even if it doesn’t, you should give the breeder/shelter a call and check if they will take the puppy back.

However, puppy mills and pet stores probably won’t accept the puppy because they care more about the money than the animal.

Such places don’t take very good care of their pets, and you end up with a sick puppy that you don’t know what to do.

Moreover, if you’ve adopted the puppy from a house with poor living conditions, it would be cruel to return your puppy to such misery.

You might be having your hands full with your unwanted puppy, but someone in your close circle might want a furry friend.

That’s your logical next step if the breeder/shelter isn’t interested in the puppy.

Start with any friends/relatives with dogs. They might be looking for a second dog and might be willing to take the puppy.

Even people with multiple dogs find it hard to say no to an unwanted puppy, so it’s worth giving it a try.

However, you should be honest with your friends/family if the puppy has health problems or behavior issues.

Some puppies might not get along with children/cats or might have inherited medical conditions that require frequent vet checks.

Others might It won’t be fair to your friends if you don’t disclose such things because you’ll put them in a difficult situation.

A popular way to rehome puppies and kittens these days is through social media.

While you might make flyers and leave them near pet stores, you will have more luck if you use your social media account.

Take some cute pictures of your puppy and post them in adoption groups or ask friends to share the information on their page.

Give all the relevant information about the puppy (age, vaccination, spay/neutered) and disclose any behavior/health problem.

Don’t be quick to give the puppy to the first person that comes forward.

Take your time to screen all the potential candidates to ensure that they will take care of your puppy.

Some candidates want puppies that look like a certain breed only to sell them and make a profit.

Others are so irresponsible that they will dump the puppy on the street when they get tired of it.

Worse, some people feed their pet snakes with puppies or use the little ones as bait.

Some would-be-owner look for pitbull-like puppies to train them for fighting.

You should have a lengthy talk with anyone who wants to adopt the puppy and ask them to sign a contract and allow you to visit.

If they say no, it’s a red flag that they don’t mean well. Requesting a small fee also discourages irresponsible people who are looking for free puppies.

#5 Surrender Your Puppy to a Shelter

Finally, if you’ve had no luck with finding your unwanted puppy home through social media, you might consider surrendering them to a shelter.

But not all shelters/rescuers will do.

For starters, some shelters kill any unwanted puppies if no one comes to adopt them. It would be horrible to surrender your pet to such an organization.

Even no-kill shelters aren’t the ideal choice because shelters and rescue groups are often overwhelmed with animals.

It will be very stressful and traumatic for a puppy to live with other unfamiliar dogs.

Check the living conditions before you surrender your puppy. Imagine how you’d feel if you have to live in a cage until someone comes and picks you up.

It’s not pleasant, and it’s not something your puppy deserves.

It can be hard to admit that you’ve made a mistake adopting a puppy.

It’s important that you find your puppy a good home with responsible people that will love and care for the little one.

Never abandon a puppy on the street because they’re not going to survive for long. And spay/neuter any adult dogs that you have.

While puppies are cute, there are too many of them and not enough forever homes for all of them.

What do you think about these tips about what to do with an unwanted puppy? Have you ever had to rehome your dog? Share your story in the comment section.