If you hug your dog, will they understand it as a show of affection? That’s what we’re going to find out today!

If you recall, I  discussed in a previous article the reasons why hugging is not a natural expression of affection for a dog – although physical closeness is. Dogs – being pack animals by nature – are no strangers to showing affection, but they bring their own forms with them – some of which translate better to humans than others. Let’s talk about those different ways of showing affection first, then we;ll see how they feel about hugs!

1- Dogs have many ways of showing affection, as I mentioned above. For example, they show each other – and humans – affection through licking.  A mother dog – domestic or wild – licks her puppies from the moment that they are born.  This serves to stimulate the puppies to breathe, to eliminate, to nurse, etc., but it is also a comfort to them.  This is largely why dogs enjoy being petted – it’s our way of “licking” them (without the wet dog taste and involuntary flossing on our part).  In turn, a puppy will lick its mother’s face to ask for food, or the pack leader’s face for the same purpose.  Licking you is both a sign that they care for you and that they trust you to care for them.

2- Dogs also demonstrate their affection through their desire to be with us.  It may be frustrating at times when you are just trying to use the bathroom or cook dinner and your pup is under your feet, but it means they love and trust you.  You are their pack, and just like in the wild, they stick with their pack nearly every moment – with some, but few, exceptions.  Your dog may wait for you at the front door at the end of the day, or come running as soon as you do come in.  Jumping up on you may not be welcome, but it is a reflection of their enthusiasm to see you.   They may lean against your legs, or lay on your feet when you sit, not letting you out of their sight for any longer than necessary.

3- As I mentioned in the other article, sleeping next to you is another display of love, and of trust.  Dogs will often sleep next to you as you sleep if they are allowed, or they will sleep next to you while you do something else.  This is huge, as they are at their most vulnerable when they sleep, and they are not only trusting you not to hurt them as they do, but they are trusting you to keep anything else from hurting them.

4- Many dogs will even protect their owners – some despite never having shown any possessive or aggressive tendencies before in their lives.  Growing up I had a collie who looked and behaved much like Lassie – he was everyone’s friend, never had to be on a leash, handled small children well – just an amazing dog overall.  He was never aggressive – barely even ever barked – unless he thought someone was going to hurt anyone in our family – especially me.  While he never attacked anyone, he would get between me and anyone he decided he didn’t like, and he let them know he wasn’t kidding.  McDuff would also get between me and the road if I was playing on the front lawn – he even herded my friends one year at my birthday party, away from the road to safety (and nobody even knew they were being herded).  By the same token, he would insist on walking between me and the road when I took him out on walks.  Most of what he did was subtle, but there was no question of his intentions.  His job was to protect his pack, and he intended to do it with everything he had. 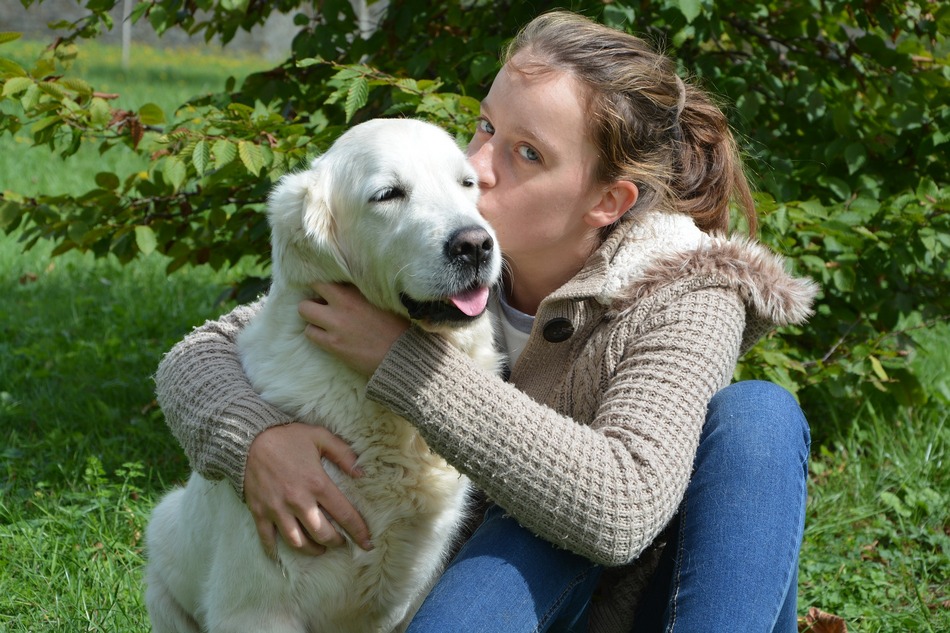 Dogs primarily show us affection in the ways they have learned through pack life over time.  That being said, over the length of our relationships with dogs, they have learned to understand, and to mimic us to some extent.  They are excellent at picking up on emotions, and intent (a topic for a whole other article) and can figure out what your gestures mean.  Our pheromones reveal our moods through body chemistry, and a dog’s sense of smell allows them to decipher the same.

Dogs are far smarter than we give them credit for.  Experts put their language comprehension at about the level of a toddler.  If they can understand even a portion of what we say, there’s no question they know what we mean. They pick up on all they ways we tell them we love them – including hugs.

Your dog may not respond well to a fast overhead hug, or to being squeezed tightly, but they do know that you mean no harm by a gentle arm around them, and some may come to like it – especially if they have been hugged since puppyhood.

If your dog is naturally nervous, they may never be able to accept a hug, and that’s okay – they’ll tell you how they feel about you – and they know how you feel about them.

Does your dog love hugs or have a special way of showing affection? Tell us your thoughts below!