Do dogs like hugs? The answer to that has been fiercely debated among experts. Find out what they’re saying and what we think!

Dogs are social creatures – pack animals, to be exact.  When they come to live with us in our homes, they maintain much of that pack structure, but not all of it.    Even in the wild, pack members will sleep piled together, snuggling for warmth, protection, and companionship.  This is something that carries over into our house wolves as well, and explains why even the largest dogs seem to forget their size and try to crawl into our laps whenever possible.  There is no question that dogs like to be close to their pack members, and cuddling is even better.  If at all possible, most of them like to be touching us at all times, and would sleep next to us in a heartbeat if allowed.

The question as to whether or not dogs like hugs, however, is a complicated one.

In a wild pack, pinning is a sign of dominance.  An alpha, or leader, in the pack will pin other members he (or she – often wild dogs have a dominant male and female in the pack) feels need a lesson as to their place in the hierarchy.  When we hug a dog – full-on hug, with both arms wrapped around it’s neck or body -our pup might interpret this as the same method of asserting dominance that a pack leader would use, and may feel intimidated or uncomfortable about the contact.

Then again, they may not.  The biggest difference between wild and domestic dogs is their upbringing, and whether or not they have been socialized – and a well-socialized dog will begin to recognize human behavior.  Since hugging is lacking the other aspects of dominating behavior – snapping, growling, staring them down – they will likely realize you are not asserting dominance over them, although they may not fully understand what it is you are doing.  The other reason they may not like hugs is that it limits their ability to run should they feel threatened or frightened.

In practice, however, dogs are much like humans – some love being hugged, some don’t.  For some dogs, it provides a feeling of security, and strengthens the bond they have with you.  They might even seek out the hugs themselves if they like them.

Growing up, I had a collie who loved hugs.  My parents and I would stand together, put our arms around each other and call “group hug” and our dog would come running from wherever he was in the house to join us.

My current dog loves them as well – she will place her paws on your chest and wait for you to hug her.  She will also come running from across the room and leap into your lap, then lean against you so that you will wrap your arms around her.  In addition, she loves having someone’s arm wrapped around her if she snuggles into our bed.

To hug or not to hug? 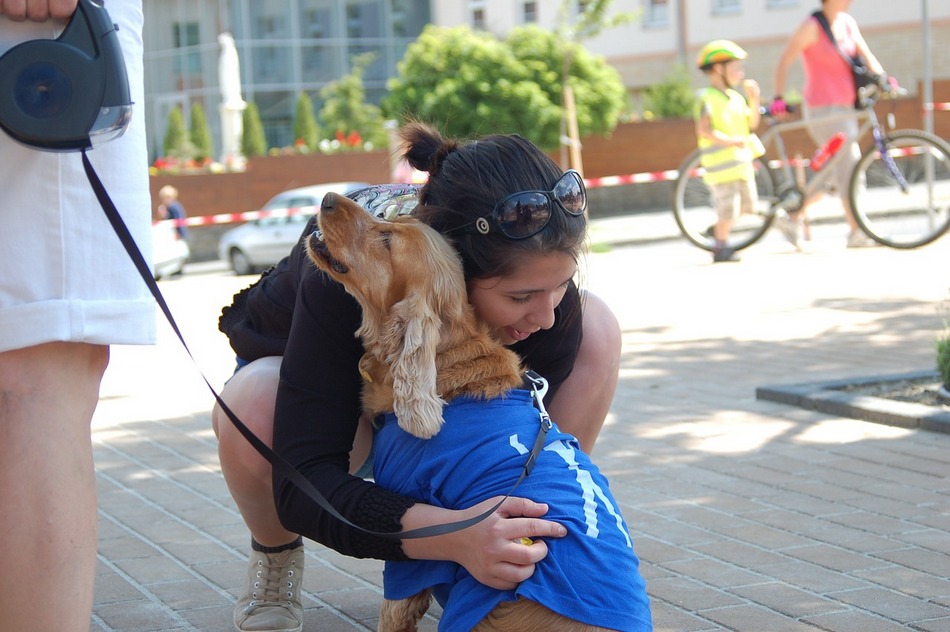 Never hug a dog you don’t know well and aren’t close to.  Unlike a human who isn’t fond of hugs, a dog has limited means of telling you this, and your proximity to his or her face could prove hazardous to your health.  I was fortunate with our current dog, because I made a mistake.  We were still at the humane society meeting her, and we were bringing her in from a meet-and-greet session where she had proven aggressive in play. Another dog was brought out into a hallway, just as some people were exiting another room, and for a moment Bella was frozen in fear as the hallway filled with people and dogs.

Without thinking, I backed myself into a corner, taking her with me, and I crouched down and wrapped her in a hug.  She melted into me and I felt the tension and fear leave her body immediately.  Like I said, I was lucky – things could have gone very badly for me.  Instead, I learned that she likes hugs, and also that there was a connection there that I hadn’t yet noticed – a very good thing, you see, because we had been considering not taking her until that point.  Still, I do not recommend doing what I did.

Even if you do know the dog, and they usually like hugs, pay attention to their body language – after all, we all have bad days.  If they stiffen, show you the whites of their eyes, growl, or otherwise seem to be uncomfortable, let them go.  Give them a minute, then if they seem to relax, give them a pet or a scratch as a sign of affection – they will definitely recognize those.

In short, let the dog tell you if they like hugs, but even if they aren’t huggers, give them lots of love and cuddles, because they need it as much as we do.  And after all, for everything they give us, dogs deserve it.