Some breeds are known for commonly suffering from genetic deafness, such as Dalmatians, Cocker spaniels and even German Shepherds as they grow older.

This sort of deafness is sometimes unavoidable and if you have a breed who you know might one day suffer, why not use that as inspiration?

Of course, breeders are often working to eradicate this genetic trait, but until that happens you can give them a strong name. 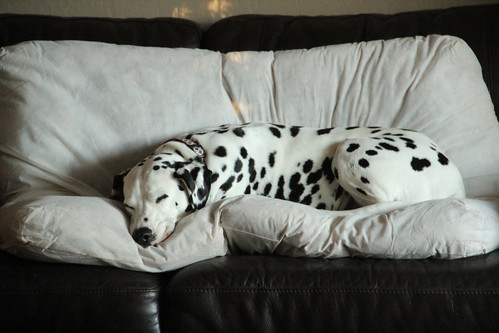 Izzy was a beautiful Dalmatian who happened to be deaf and was given up after her owner remarried.

However, when she was dropped off at a rescue center with her sister Lola, they forgot to mention they were deaf until it was discovered in some tests.

Eventually, after two failed adoptions, Izzy was adopted by her foster parent and became known as a sweet and affectionate dog.

What better pooch is there to name your dog after?

before, but if not I’m here to educate you.

Helen was the first deaf-blind person to earn a Bachelor of Arts degree, something not many people have achieved.

She managed to do some incredible things in her life such as becoming an activist and author.

In fact, she was so smart that she learned to know which person in her family was coming near her thanks to the vibrations of their footsteps.

She was a strong woman and her name would be perfect for your dog.

Heather is such a wonderful name that sounds very calming, but it was also the name of a former beauty queen.

was the first deaf Miss American titleholder, after losing her hearing at the age of 18 months old.

However, that didn’t hold her back in life and now works as a motivational speaker and author. This really is a beautiful name for your dog.

One of the more unique names on this list, Marlee comes from the actress Marlee Matlin, who is a deaf actress.

Similar to Heather Whitestone, she has been deaf since the age of 18 months old but is the only deaf actress to win an Academy Award.

Marlee is a great name for your dog, whatever their breed. It is definitely one that I would use myself.

I love names that have symbolism or mean something in a different language.

A lot of inspiration can be taken from ancient figures or languages and Simona is no different. In Hebrew, it means ‘listener’, which some may find ironic.

However, I love that it is the complete opposite of deafness and allows you and your dog to have strength in the face of the disability.

Alexander is a strong name, with the moniker belonging to a number of famous figures in history.

In this case, it belonged to Alexander Graham Bell, who created the telephone and worked closely with deaf people.

Of course, this name can be easily shortened to Alex to make it easier, but I prefer it’s full form.

There are a number of famous novelists who were deaf, but for this list, I chose to find inspiration from Stevie Platt

While he has only written a couple of books, I love how simple his name is and think it would be great for a dog.

This also works well if you are a fan of Stevie Wonder.

If you are a fan of history and boxing, then you might know that James Burke was a deaf man and one of England’s earliest boxing champions, dating back to the early 1800s.

147 years after his death, he was added to the International Boxing Hall of Fame in 1992. If you choose to name your dog Burke, it will be remembering his legacy.

Ludwig van Beethoven was a famous German composer and pianist who famously started losing his hearing in his 20s and was completely deaf by the time he was 40.

While he gave up performing in public, he still composed music in private.

In fact, his most famous works were completed while he was deaf, showing greatness isn’t stopped by a disability. If you are a fan of his classical music

, why not call your dog Beethoven.

Laurent Clerc was one of the two men that founded the first permanent school for deaf people, The American School for the Deaf.

Laurent is often seen as the most famous deaf person in American history and helped future generations of deaf people.

I happen to like the name Laurent for its French roots and it would work well for a French breed of dog.

There are so many incredible deaf dog names that you can take from history but these are my favorites.

Do you have any other favorite deaf dog names? Tell us below!