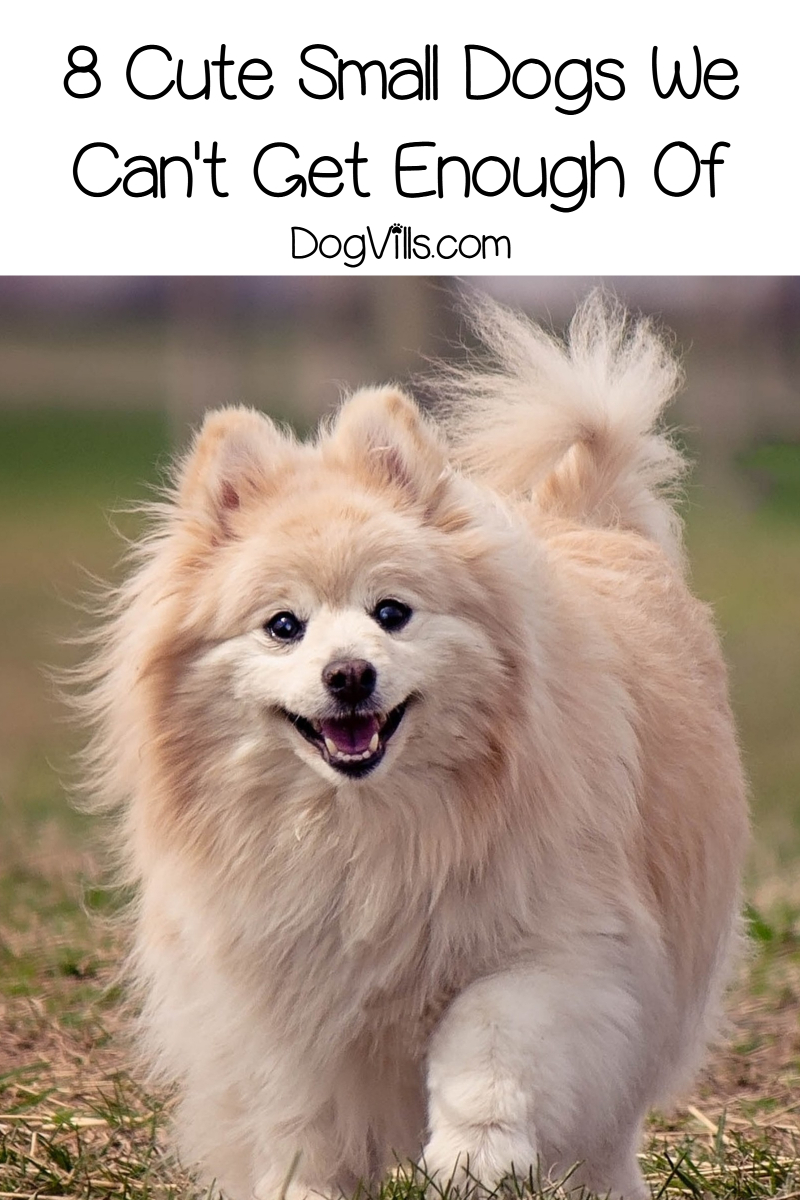 From cute small dog breeds to the gentle giants, every dog size has its supporters just waiting to extol their virtues to anyone who will listen.

All dogs are cute, of course, but there is something extra adorable about tiny bean-shaped toes and little legs that move faster than you’d think possible.

Despite their small stature, small dogs often believe they can take on larger dogs.

In fact, in many homes that have both small and large breed dogs, the small dog is the boss. (As long as there isn’t a cat in the house. Cats rule all.)

Below, you’ll find benefits of owning a small dog, along with our top 8 favorite breeds!

Benefits and Caring For Small Breeds

Many people choose smaller breeds because they are perfect for apartment living.

Smaller dogs are somewhat easier to manage. If they misbehave, all you have to do it pick them up.

They can’t reach counters to steal food or get into the garbage. However, they can steal your heart with their puppy dog eyes.

Any food for small breeds should have the right nutrient and calorie profile for a tiny dog’s needs.

Ready to see those cute small dog breeds? Check out 8 of the cutest compact canine companions that we can’t get enough of!

Affectionately known as “Yorkies,” Yorkshire Terriers were originally bred to hunt rats in mills until royal families took a shine to the tiny dogs.

The former hunters became a status symbol. Cracking the Top 10 Most Popular Breeds list for over five straight years, Yorkies are a lap dog used to living in luxury.

Yorkies are easily identified by their long, silky tan coats.

They require daily grooming and many owners opt to keep the fur trimmed short. Yorkshire Terriers are extremely playful and affectionate.

They enjoy snoozing the day away in the lap of their owners.

Chihuahuas are known as the smallest dog breed in the world.

The dog breeds were turned into cultural icons after Taco Bell made a chihuahua their mascot in the late 1990s.

The breed is considered loyal but temperamental.

Proper food and nutrition can help the tiny dog live a healthier life with the best foods for your loved chihuahua.

Pugs are immediately recognizable by their smushed-in nose and curled tail.

The breed often has an underbite and prominent forehead wrinkles. Pugs were brought to Europe from China.

The dogs were popular among the royals. They were later bred to be companion dogs and they take their job very seriously.

Due to their small snouts, Pugs are prone to breathing problems that can be quite serious. They do best in cooler climates.

However, as long as precautions are taken, the dogs can live full and happy lives despite their medical issues.

Despite their name, the Bichon Frise did not originate in France.

Rather, they were bred in Spain as sailing dogs before becoming popular lap dogs for French nobility.

Bichon Frise are considered curious dogs with a happy disposition.

The signature look of the Bichon Frise is its curly white fur with a somewhat bushy tail.

While the dogs are easy to manage personality-wise, they require a skilled owner who can fulfill their daily brushing and grooming requirements.

The spaniel-type of dog has a long, storied history on the laps of aristocrats.

In the 1920s, a challenge was given out to breeders to see who could come the closest to recreating the royal dog and the Cavalier King Charles Spaniel was born.

Known for their long ears and fluffy coat, they are often top contenders in the AKC’s annual dog show.

Cavalier King Charles Spaniels are a social breed with a natural hunting instinct, despite their small size.

The breed is prone to heart failure and other medical conditions.

The small dogs rose to popularity after the royal family of England began breeding and promoting the dogs.

Two of the dogs who survived the Titanic were Pomeranians.

The dog’s red or orange fur is their most recognizable trait. Poms are a lively breed who enjoy playing with their owners but aren’t always welcoming to other dogs or people.

While the breed’s popularity is in an overall decline, they are still popular for city living, perhaps because they easily fit into small apartments.

More often referred to as “weiner dogs” or “sausage dogs,” because of the difficulty in pronouncing the German name, Dachshunds are known for their stubby legs and long bodies.

The small size of the breed originally made them popular in hunting. The dogs were easily able to follow prey into burrows and holes.

Dachshunds can still be used for hunting but they are mostly kept as companions these days.

Physical traits of Dachshunds include larger-than-expected paws and long snouts.

Owners often find their weiner dogs burrowed under blankets. Dachshunds are friendly and playful but can be quite stubborn at times.

They are popular subjects of jokes because of their amusing appearance.

An Affenpinscher may seem like an odd choice for a cutest dog list. They’re nicknamed “Monkey Dog” because of the monkey-like facial expression.

As with most small dogs, they were originally bred to hunt rats and other rodents.

However, they quickly rose to a higher rank when ladies of noble descent began acquiring the breed as companions.

The Affenpinscher is a playful and curious breed that can often be protective of their family.

This territorial behavior can extend to toys and food, which can cause friction with other dogs.

Small dogs are often preferred for living in big cities because of their size and temperament.

However, even smaller breeds need regular exercise and affection. A list of cute, small dog breeds could be never-ending.

Do you have any cute small breed dogs to add? Share below!

About the Author: Leo Wilson graduated from a university major in animal health and behavior. He had over a decade of experience working in the pet industry and has contributed many dogs and pet-related articles to several websites before he decided to start sharing his knowledge on his own blog. And when he is not busy working, he and his wonderful wife love spending time at home with their 3 dogs and 2 cats.