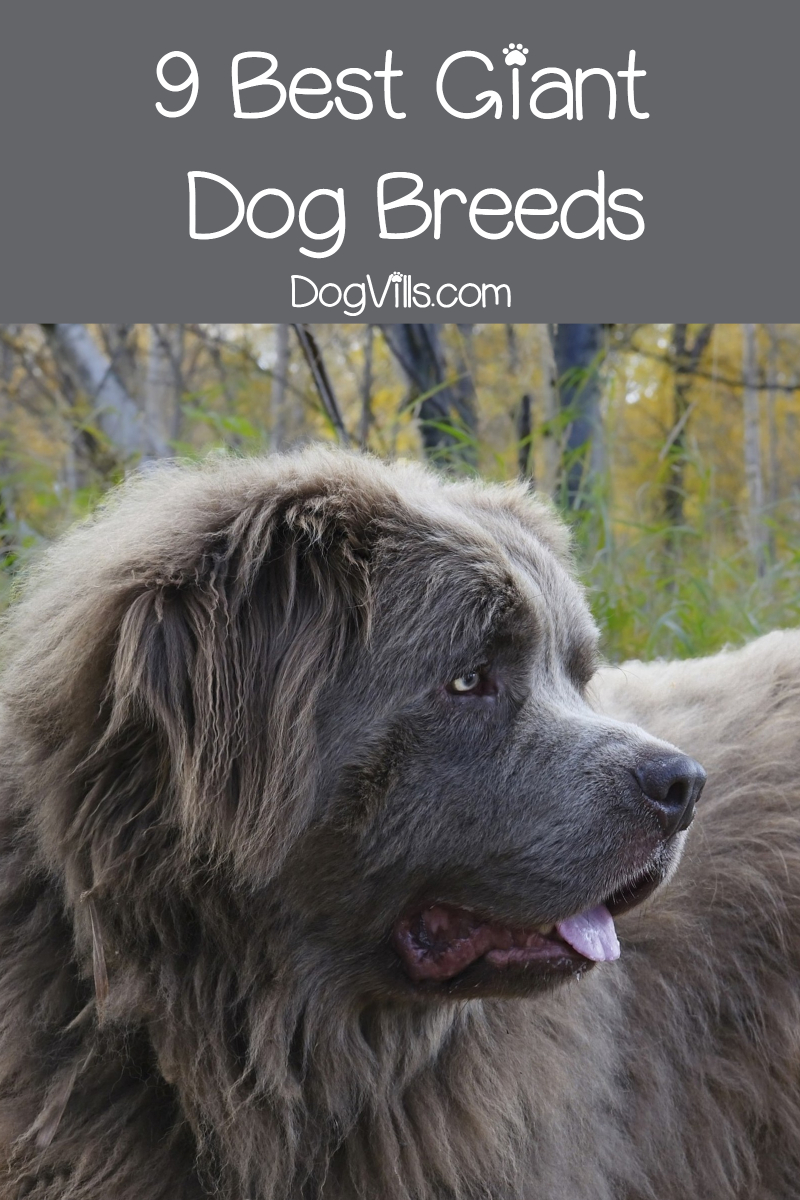 Are you in love with giant dog breeds as much as we are?

Maybe you’re thinking of adopting a dog and looking for the perfect gentle giant for your family?

Either way, we have something special for you.

Keep on reading to discover unique extra-large dog breeds that will amaze you not just with their size but their larger-than-life personalities, too!

It’s amazing that some dogs are so small they fit in a tote bag, while others are as big as a pony and might bruise you by accident.

While giant dogs might look intimidating and scary, most of them are gentle, patient, and loving.

With such a size, they are rarely challenged by other dogs or thieves so they could be excellent guard dogs for older kids.

So, let’s see the biggest dog breeds in the world.

The Great Dane is truly a unique giant dog.

Bred to hunt boars, Great Danes are now excellent human companions and get on well with other small pets and children.

While the Great Dane is not the heaviest dog in the world, he is one of the tallest ones.

Zeus, a Great Dane, holds the Guinness World Record for the tallest dog in the world with his 44 inches of height. That’s the average height of a 6-7-year-old child.

As his owners share, Zeus was so large that he used to leave bruises if he stepped on somebody’s foot.

Moreover, he was so big that he couldn’t fit in a car and they had to use a van to transport him. Not to mention the 30-pound bags of dog food he consumed every day.

Unfortunately, these magnificent dogs don’t have a long lifespan. They live eight years on average and are prone to cancer and bloat.

Another amazing giant dog breed is the Irish Wolfhound. It’s a breed created to hunt large prey such as deer, boars, and wolves.

Think about a donkey, and you’ll have a rough idea of how big an Irish Wolfhound is.

Nevertheless, Irish Wolfhounds make poor guard dogs because they are sweet-natured and don’t have a single aggressive bone in their big bodies.

However, their appearance alone will make any thief think twice before he enters your yard.

Just like the Great Dane, the Irish Wolfhound has an average lifespan of 6-8 years, and they are prone to bloat and sensitive to anesthesia.

Do you know that Mastiffs are one of the most ancient dog breeds?

The Mastiff’s ancestor was a ferocious battle dog 5,000 years ago. That’s far from today’s benevolent temperament of this massive dog.

On average, the English Mastiff is 30 inches in height, so he is not as tall as the Great Dane and the Irish Wolfhound. But this unique large dog is the heaviest of them all.

The Guinness World Record for the heaviest dog belongs to Zorba, an English Mastiff, with his impressive weight of 343 pounds.

But, on average, you can expect an English Mastiff to weight between 120 to 220 pounds.

Despite being as big as a small horse, the English Mastiff is gentle and considerate of the people he loves.

The Mastiff is also courageous, sensitive, and protective, but rarely aggressive and vicious.

Since we are talking about Mastiffs, we can’t miss mentioning Neapolitan and French Mastiff. Both breeds are almost as large as their English cousin.

He’s a dog highly protective of his family. As such, Neapolitans are aloof with strangers and unlikely to greet them warmly.

Dogue de Bordeaux, also known as French Mastiff, is slightly shorter than other Mastiff breeds with an average height of 27 inches and a weight of over 125 for females and 150 pounds for males.

However, they have the biggest heads in proportion to the rest of the body. Nevertheless, they make great apartment dogs.

French Mastiffs might scare with their big jaws, but he is a real sweetheart if socialized properly.

They are also very protective of their owners and will act if they sense any danger.

With its bear-like appearance, Newfoundland is one of the best giant dog breeds if you’re looking for an affectionate pet.

This dog is sweet-natured, gentle, calm, and loves kids so much that people say he is a natural babysitter.

He could also be a suitable dog for children with autism.

The largest recorded Newfoundland was 260 pounds and over 6 feet long from nose to tail.

Keep in mind that Newfoundland dogs tend to look bigger due to their magnificent thick coat.

Similar to a lot of large dogs, Newfoundland is prone to certain diseases such as hip and elbow dysplasia, cataract, epilepsy, cancer, and gastrointestinal problems.

The breed has a short lifespan of around eight years.

Have you ever wondered what would happen if you cross a Newfoundland with a Saint Bernard?

Throw some Great Pyrenees into the mix, and you have a Leonberger – a unique large dog with a lion-like look.

These are big dogs excels in agility and obedience classes because they are highly intelligent and full of energy.

In addition to this, they tend to be mischievous and messy.

With an average height from 28 to 30 inches and a weight between 140 -180 pounds, Saint Bernards are huge and fluffy.

They are probably one of the most popular giant dog breeds thanks to their gentle temperament and their film/TV representation.

Used as mountain rescuers in the past, Saint Bernards are not only large but also sturdily build and can trek in knee-deep snow without getting tired.

So, they are an excellent choice if you’re looking for a winter dog breed.

However, these dogs tend to make a mess in the house because they drool a lot and blow their coats twice a year. We’re talking about enough fur to knit yourself a couple of sweaters.

Anatolian Shepherds used to be herding dogs and were created to resemble the colors of their charges so that predators won’t notice among the herd.

They are muscular dogs with enough body strength to take a wolf or a bear down.

With a height of 29 inches and a weight between 80 to 150 pounds, Anatolian Shepherds are impressive guardians and one of the largest dog breeds.

They are highly protective of their immediate family and reserved/aloof with strangers and close friends.

The Anatolian Shepherd is also very stubborn, dominant, and independent, so he is not a good choice for first-time owner.

Last but not least, we have the Great Pyrenees as one of the best giant dog breeds.

Standing at 27-32 inches tall and with a weight between 85 to 150 pounds, the Great Pyrenees has a magnificent white coat and a calm disposition.

He is naturally protective of his family and showers his owner with unconditional love.

Since the Great Pyrenees was a herding dog, he likes to figure out thing by himself. That’s why he can be quite stubborn.

You should start obedience training as early as possible, or you’ll have a 150-pound dog out of control.

On the other hand, a well-socialized Great Pyrenees is a joy to have around the house even though he tends to bark a lot and tries to fit his giant body on small chairs.

A large dog means more responsibilities and expenses than a small one.

However, each one of these unique large dogs is a loving companion and a fierce protector.

They might make a mess in your house, but they will fill your heart with so much joy that you’re not going to miss how orderly your life used to be.

What do you think about these 9 best giant dog breeds? Share your thoughts and experiences below!