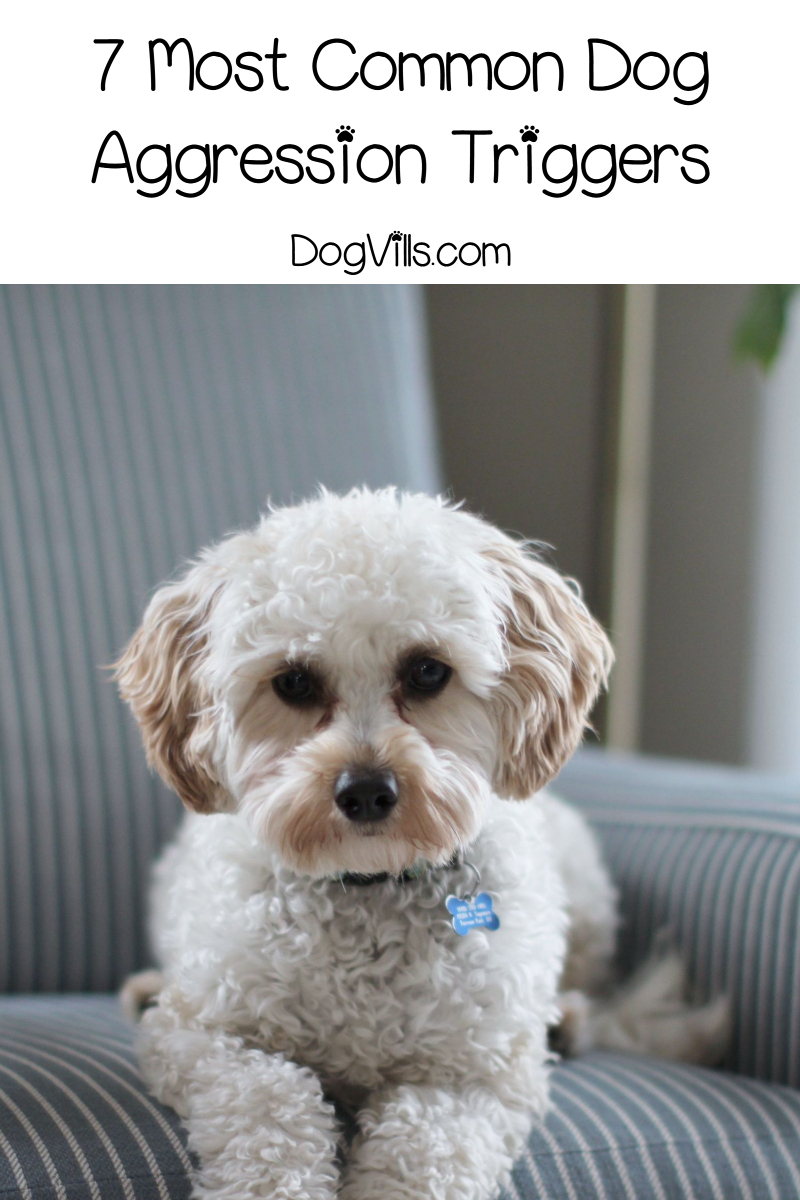 Are you wondering about dog aggression triggers?

If your pooch has been acting aggressively or protectively recently, you might be wondering what the cause is.

Well, I’ve got just the thing for you.

Just keep on reading to find out what could be getting your dog’s hackles up!

Despite what some people think, dogs are rarely aggressive without reason.

Often it’s the lack of proper socialization while young that creates suspicious and untrusting dogs.

But it might even be a medical condition or past abuse.

The triggers I’m going to talk about are general ones to give you an idea of what to look for when analyzing why your dog has acted aggressively.

Unfortunately, not all dog breeds are child-friendly or pet-friendly.

Some lack the patience required to tolerate the curiosity of a small child, while others have a strong prey drive.

In addition to this, children and small animals make erratic and sudden movements.

Besides, children sometimes might hurt a dog by accident. In turn, the dog might bite to defend itself. That’s why you should never leave a child alone with a dog without adult supervision.

I remember Lucky. He was a good dog, but the poor thing could control himself around bikes.

Every time a biker would pass near us, I had to keep a firm grasp on the leash. Otherwise, the biker would have gone home without pants or shoes.

In addition to this, dogs might get so excited when watching a moving object that they have to attack.

So, you have to be careful around:

You might think that dogs get on well with each other. Think again!

While some dog breeds love the company of a fellow canine, others are dog-aggressive.

They see other dogs as a threat to their territory and authority. As a result, they need to pick a fight and establish the pecking order.

If you’re thinking about adopting a second dog, most specialists advise that you get a dog of the opposite gender to avoid dog-on-dog aggression.

#4 Getting too close for the dog’s liking

The one rule I remember about dogs from my childhood is, “Never startled a dog.”

Even the mellowest dog won’t react well if you invade his comfort zone without warning.

Far worse would be to startle Fido while he is sleeping or absorbed in other activities.

In addition to this, nervous or anxious dogs might think that you represent a threat when you move suddenly in their direction. Logically, they will get aggressive as a defense mechanism.

#5 Being handled in certain ways

Another dog aggression trigger is handling the dog in a way that Fido doesn’t like.

For example, trimming nails, brushing coat, bathing, medical procedures, and so on.

While some of these are necessary for the well-being of your dog, you should proceed carefully if such actions trigger aggression.

Furthermore, some dogs don’t like to be petted or being picked up. Respect this wish. Otherwise, it will be hard to establish a trust bond between you and your dog.

A dog that can’t reach the object of its frustration because of a gate or a leash might redirect his aggression to a nearby object.

That’s why when you see that your dog is getting agitated and frustrated by another dog, animal, or person you should intervene as soon as possible:

In addition to frustration, pain also makes a dog react aggressively. So, any sudden change in your dog’s demeanor should be evaluated by a vet.

One of the most common reasons why a dog gets aggressive is to protect its food, sleeping place, toys, etc.

That’s why Fido might bark, growl, and show teeth if he thinks that you or another dog are going to take something from him. That’s called resource guarding.

Territory aggression is also a form of resource guarding.

The dog considers the whole family and the house as valuable objects that should be protected no matter what. So, when a strange animal/person appears, your pooch might react aggressively to defend you.

Once you know your dog’s triggers, you can do your best to avoid them or work on your dog’s reaction towards them.

Have you dealt with any of these dog aggression triggers? Share your experiences below!