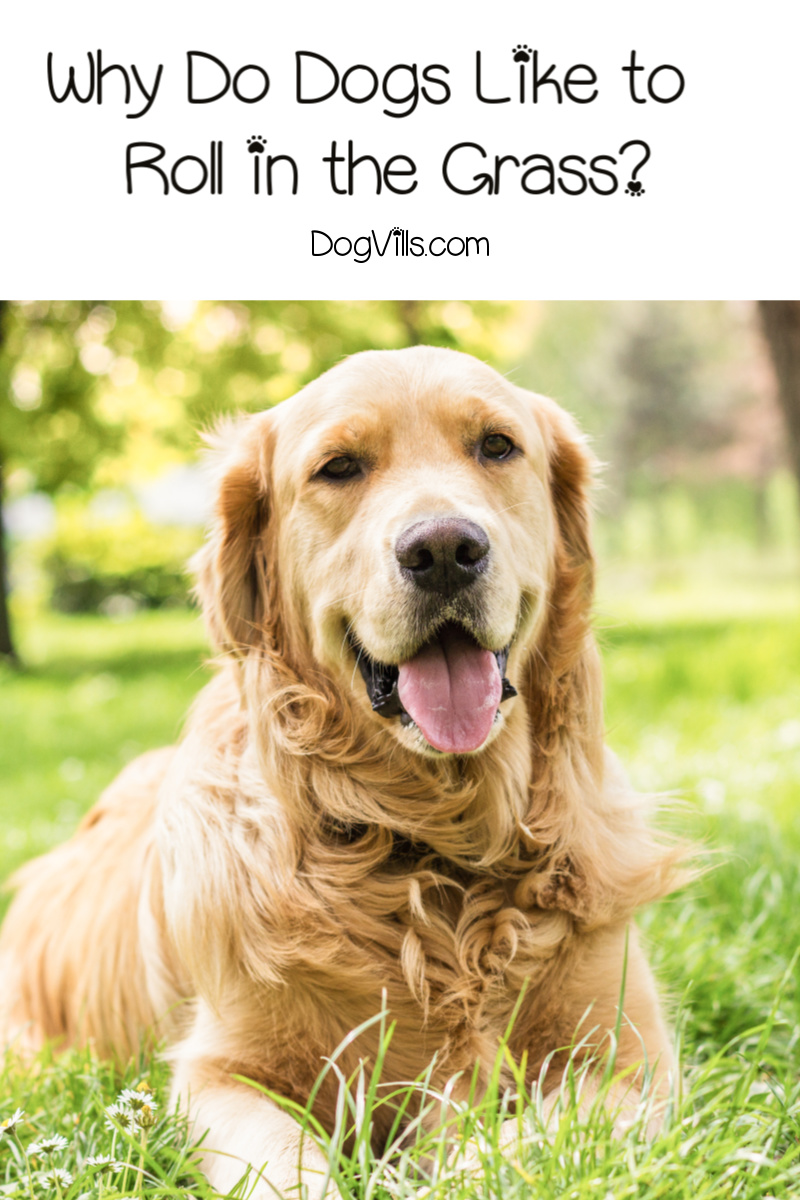 Why do dogs roll in the grass?

Is it just odd yet normal behavior, or some sort of sign that your dog is sick?

Literally every dog owner has asked themselves these questions at some point.

Read on to find out the answers!

Why Do Dogs Roll in Grass?

Every dog owner has seen their dog roll around in the grass.

But what does it really mean?

Is there more behind the strange behavior and can it be potentially concerning?

Rolling Around in Grass to Express a Happy Mood

This seems rather obvious and happens when dogs just roll around to get that excess energy out and to enjoy the sun.

If your dog kicks his legs up in a relaxed manner, rolls over a couple of times and easily snaps out of it, don’t worry.

This behavior can often be viewed when you have a great bond with your dog.

He’s happy to be around you and feels comfortable enough to roll around in the grass.

Dogs automatically expose their belly with this, which is weak spot and a sign of trust.

Here’s an article that covers bonding with your dog and what you can do to improve your bond (outdoor activities are a great start!).

Dogs Use Grass for Self-Grooming

Although this might feel counter-intuitive to us, dogs really like to use the grass as a way to groom themselves.

If your dog has something stuck to his back or other hard-to-reach regions, he might opt for a good roll in the grass to get that strange thing off him.

During shedding season, it’s particularly easy to spot among our extra furry companions because they are trying to get rid of loose patches of fur.

Ever seen a 170+ pound St. Bernard (which you definitely should) or any other comparable long-haired breed with a double coat?

Then you know what I mean. Patches of fur fly around like tumbleweeds.

Of course, your dog’s way of self-grooming is no substitute for real grooming.

This is why I’d recommend reading this article on grooming your dog at home.

Why Your Dog Rubs Himself After Bathing

Another reason for your dog rubbing his whole body against various surfaces (though grass is definitely a favorite if provided) could be that he wants to get rid of the smell after bathing.

Both of you just went through this whole ordeal of bathing and made it out alive.

Then your dog hops out of the bathtub, shakes himself off, and proceeds to roll around in the grass.

This is where it comes in handy to teach your dog a “shake“ command and make bathing a pleasant experience.

Afterwards, thoroughly rub your dog with a towel and maybe you want to restrict the access to the yard so your dog doesn’t cover himself in fresh dirt.

If your dog is particularly fascinated by the odor, he might sniff a very long time around one spot and then decide to throw himself on the ground with all his might.

My Rottweiler girl does this very often. I’d say that 9 out of 10 times, she rolls herself in grass due to the smell.

This can have various reasons. One of which is an interesting smell originating from another animal’s hole (rabbits, moles and so on).

It could also be a spot previously marked by a very interesting male or just some grassy spot another dog has rolled himself in.

It’s seen as a social sign if a dog rubs himself in another dog’s scent. After all, that’s the very first thing dogs do when they meet each other.

More often than not, excessive sniffing even leads to problems with one of the parties being too persistent, for example.

Even if the smell your dog rolls himself in is not of animal origin but rather just some good-smelling spot (however you want to define “good” in this context), this behavior can also be observed in wolves.

Upon returning to the pack, other members started to investigate the smell’s origin.

Covering oneself in a certain cologne is just another form of social interaction for dogs.

Look Out for Unhealthy Grass-Rolling

If your dog seeks out grass to roll around very aggressively, it might be sign that something is causing him discomfort.

This can happen on all kinds of surfaces, though the smell in the grass and the itchy or tickling effect could heighten this sensation.

From personal experience, I know a rescue (formerly stray) dog that started rubbing his ear excessively on the grass during a walk and it really seemed to cause discomfort.

As it turns out, he had an old wound that opened up inside the ear (presumably due to heavy scratching) and it started bleeding.

If you catch signs of discomfort quick enough, you should further investigate and consult your vet if necessary.

This doesn’t only happen due to temporary physical discomfort but also due to mental health problems.

Among them OCD (obsessive compulsive disorder) or a less developed form of it.

What can you do against that?

If you observe excessive rolling around in the grass, just try to focus your dog’s attention on something else.

Use the time for some recall training (make sure you’re packing high-value treats) or distract your dog with his favorite toy.

Puppies Rolling Around in Poo

Yep, there are dogs (especially puppies) that like to roll around in poop and yessir, there are others like you who have to deal with this.

Though keeping your puppy out of dog poo is probably in your best interest, it’s perfectly normal for your dog to do that; or rather, that’s as normal as our dogs will get.

To stop him from doing that, distraction is your best friend again in order to prevent the rolling in poo from happening in the first place.

You may want to restrain from scolding your dog too harshly for this as it might cause confusion because your dog isn’t doing anything wrong really.

Always work with positive reinforcement and luring if possible.

Last but not least, make sure your dog is generally healthy after being exposed to grassy fields.

This can include ticks, worms and other parasites that your dog can pick up during rolling in the grass.

Stay away from grass where pesticides or anything else that may be harmful to your dog has been used.

So, there you go! As you can see, there are many reasons why dogs roll in grass, and most of them aren’t worrisome.