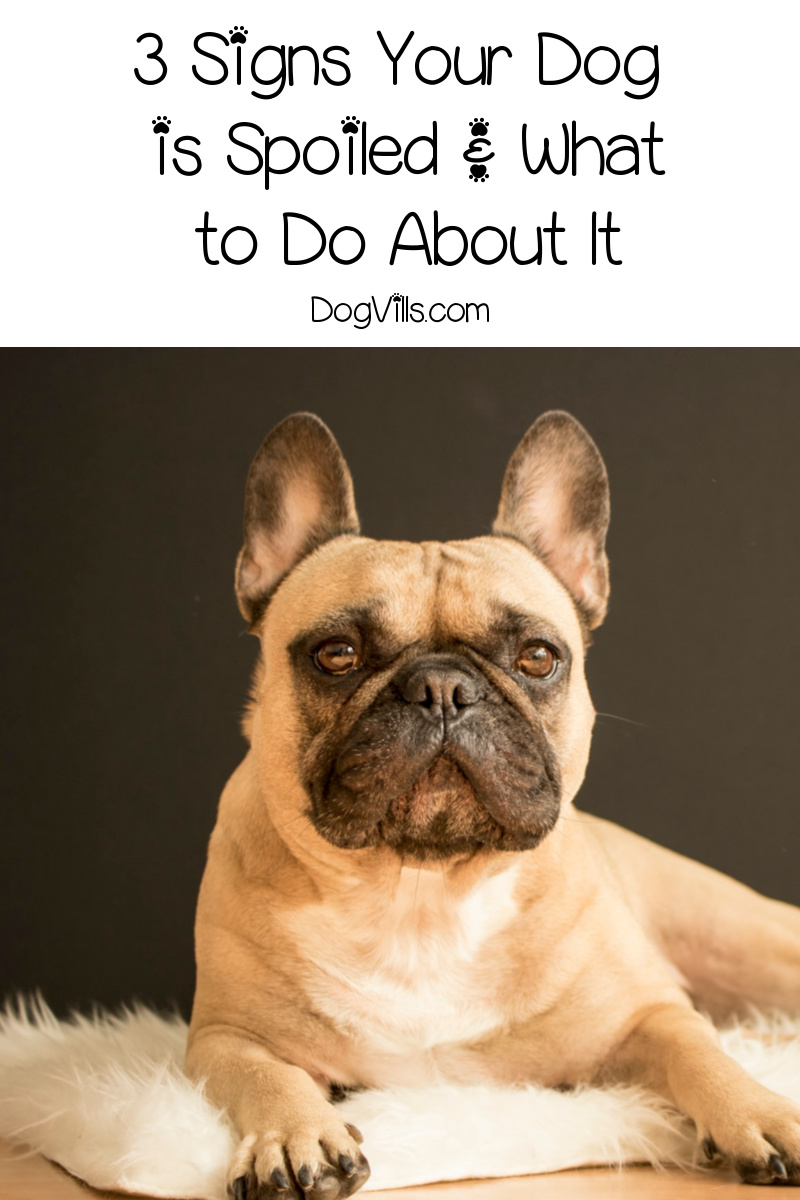 Signs your dog is spoiled is our topic of discussion today.

Most of us spoil our dogs on one level or another, and to a certain extent, that is totally fine.

After all, our dogs are like our kids, and we often treat them in much the same way.

However, just as with children, you can reach a point with your dog where the spoiling is out of control.

That’s why today, we’re talking about signs to watch for and what to do!

You may also like: 8 Reasons Why Your Dog Is Clingy All the Sudden

3 Signs Your Dog is Spoiled

Most of us dog owners treat our fuzzy buddies like our children, and that’s great. They deserve that much love and devotion.

However, just as with children, too much spoiling can lead to rotten behavior.

In the case of dogs, it can also lead to an unhealthy life.

So too much spoiling and catering to their whims can be detrimental to both their physical and mental well-being.

Let’s take a look at how to tell if your dog is spoiled.

1- Your Dog is Fat or Obese

Most dogs are food-driven, and most training methods encourage rewarding them for their good behavior with treats.

Some dog owners, however, take that too far.

They’ll often give their pet a treat when a simple belly rub and a “good boy” is plenty. They also might give too many treats at once.

Many owners will also feed their dogs table food. This is especially true of owners with particularly pushy buddies.

In the moment, it feels good to watch our four-legged pal enjoying his treat, but in the long run, it leads to both physical and emotional issues.

Physically, your dog gets fat which opens him up to a host of possible maladies including diabetes, cancer, and joint issues.

Emotionally, your dog learns that he rules the roost. That mentality leads to an almost total loss of control and makes daily life incredibly difficult.

Another sure-fire sign that your dog is spoiled is chronic misbehavior.

This is a behavior that is both taught and reinforced by owners who “just can’t say no to that face.”

Owners have to learn to say no.

This mentality leads to issues like constant pulling at the leash, bolting, not listening when called, and simply ignoring basic commands.

This sets a dangerous precedent that puts your dog in real harm’s way.

Dogs like this will often do things like bolt from their owners and refuse to return when called.

If you pair that scenario with something like a busy street or an unknown dog, you have a recipe for disaster.

3- Your Dog is Overprotective or Aggressive

This is a trickier form of spoiled dog behavior because some dogs, especially certain breeds, are just naturally protective of their people or their belongings.

That being said, the vast majority of dogs who are overly protective are simply spoiled rotten brats.

We all know the dog I’m talking about. He seems to only love his owner.

He growls or snaps at everyone and every animal that gets within his “owner zone of protection”, and he will freely nip if it looks like anyone, even his owner, is trying to take something like a toy away from him.

This behavior is due to improper socialization and reinforcing bad behavior. Let me give you a couple of examples.

An improperly socialized dog has no idea how to interact with anyone outside of his home.

He is naturally overprotective and overly aggressive toward anyone or any animal that gets near his owner because he hasn’t learned that the world and the people and animals in it are not a chronic threat.

When I worked at the vet, we had a Rottweiler patient that was just terrible to work with.

He was aggressive and didn’t just try to warn you with a snap, he tried to actively bite you.

And he was a BIG boy. I often wondered how a dog that was in such good health and had an owner who loved him so much got that way.

Then, one day he lunged at me, and his owner laughed, scratched his head, and said, “That’s our boy. He’s so protective.”

She was rewarding the behavior and reinforcing the idea that biting was not only tolerated, but it was also encouraged, an incredibly dangerous lesson to teach such a large, powerful dog.

You Dog “Punishes” You

Scientifically speaking, dogs don’t have the capacity to hold grudges or punish us in the traditional sense, however part of the pack mentality is trying to establish dominance.

A spoiled dog may do things like defecate or urinate in the wrong spots even though they know where to go if you have told him no or have done something he doesn’t like.

Unlike the human version of punishment, your dog is simply reacting on an instinctive level, but the outcome is quite similar.

How to Reverse Signs Your Dog is Spoiled

Once you understand how to spot signs your dog is spoiled, it’s time to unspoil him.

The key to unspoiling your pooch is a combination of boundaries, training, socialization, and consistency.

The first thing to do is to start teaching your dog what he can and can’t do.

To begin with, it’s not good for him in many cases. In addition, it teaches him to beg for what he wants, which encourages bad behavior.

Pulling at the leash? That’s a no-fly zone.

Stop the walk until he stops pulling and then begin again.

Jumping on people? Adorable but dangerous.

Don’t give him any attention until he calms down.

Things like this help establish boundaries that help to calm your dog down and teach him that you’re the boss.

Put Him on a Diet

Closely related to boundaries is putting your tubby buddy on a diet. He got that way through bad behavior like begging.

Stop all table food, drastically reduce treats and only use them for training, cut his dry food down, and replace some of it with green beans.

The cessation of table food helps him learn not to beg and establishes your role as pack leader.

Reducing treats and only using them for training makes them more special and eliminated excess calories.

Green beans are incredibly low in calories and allow your dog to feel full while on his diet.

They also serve as a way to soften the blow of no table food. Come on, we’re not barbarians, here.

Whether your dog is a social butterfly with excitement issues or a grouchy Gus who thinks everything in the world should be annihilated, proper socialization can help.

For dogs that are overly enthusiastic about meeting new people and animals, socialization includes taking them out to places where dogs frequent and keeping a tight leash on him.

Don’t allow him to engage with other people or animals until he is calm and under control. This could take several tries, but eventually, he’ll get it.

It’s a little different with an overly protective dog.

Start small. Have a friend come over to the house and just sit for a while, allowing your dog to get used to another presence in the home.

Slowly and methodically work up to more people and outings to places where dogs frequent.

Always keep your dog under control and exude an air of confidence and calm.

The key here is to show your dog that the world isn’t a place to be feared and constantly attacked, but rather, it’s a place full of fun new people, animals, and experiences.

Finally we come to training, a key part of unspoiling your dog.

One of the key signs your dog is spoiled is a lack of obedience.

Begin training your dog in basic commands, rewarding him liberally with praise and treats – in this case, treats are okay.

Start with things like sit, stay, down, and the like. These basic commands are key to his good behavior and his safety.

This training establishes your role as pack leader, increases your dog’s connection with you, shows him clear boundaries, and helps him build self-confidence.

Reverse the Signs Your Dog is Spoiled

Although it feels good in the moment to give our dogs too much food or reward bad but adorable behavior, in the long run, it’s just bad for them.

Remember, our dogs are like kids to most of us, and we always do what’s best for our kids whether they like it or not.

The same holds true for our pets. The difference is that our pets won’t hold a grudge like our kids might. LOL

If you follow these tips, you’ll be able to see the signs your dog is spoiled and then take the appropriate actions to rectify the situation.

Do you see any of these signs your dog is spoiled in your own home? Share your thoughts below!