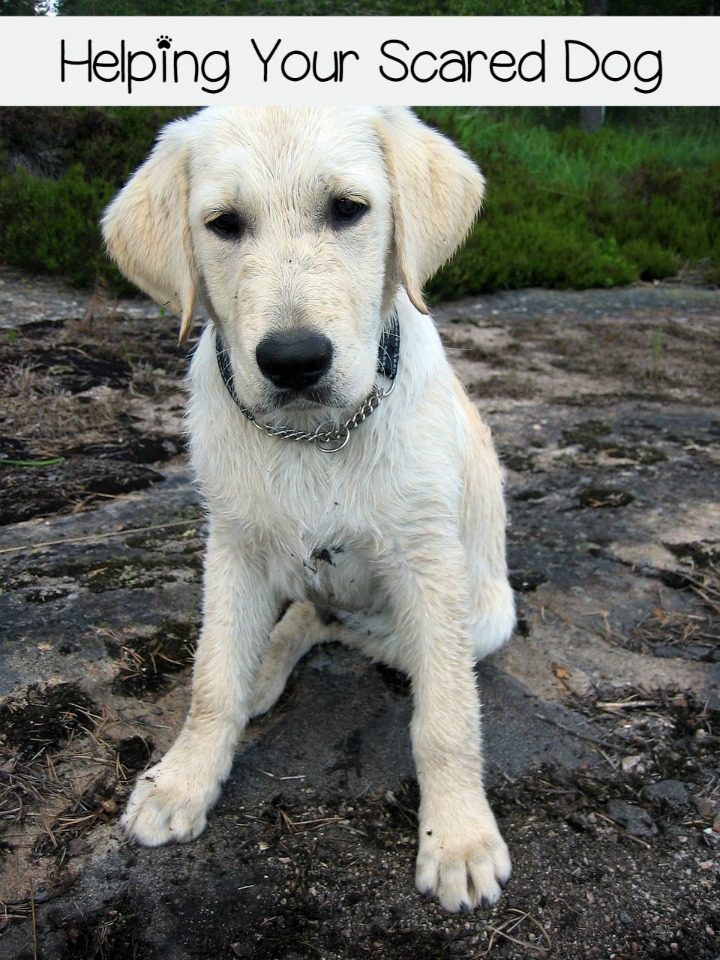 A scared dog is an unhappy dog. I recently wrote an article on the various forms of dog aggression and what to do about them. One of those forms was fear aggression. There is another form of fear in dogs – pure terror. That’s no exaggeration. Some dogs are so fearful, they simply melt into the floor in abject terror over anything. If you have a scared dog, there are some things you can do to help him view the world with a different lens.

Portrait of a Scared Dog

As a vet assistant for seven years, I saw my fair share of terrified dogs. Some dogs snapped. Some dogs rolled. Some dogs urinated and defecated all over the premises. Then there were the dogs that simply became fuzzy lumps of fear on the exam table. In the other cases, the dogs were simply afraid to be at the vet. The fear lumps were invariably dogs that had intense fear across the board.

In those cases, the dogs were basically afraid of planet earth. That’s no way for a dog to live. The quality of life for a perpetually scared dog is very grim, but there are things you can do to help your fearful pooch.

How to Help Your Scared Dog

I recently read a post regarding an owner and his rescue dog. He got the dog as a puppy and has been trying to socialize him. The problem is that the dog is simply terrified of everything. He shows no aggression, but he keeps his distance from people, and if approached he will cower on the floor. That’s the story for most dogs with intense fear issues. Let’s talk about how we can remedy that.

If you have a scared dog, you may have to make some changes to your life, at least in the beginning. A scared dog requires an environment free of loud noises and any sort of raucousness in general. If you normally love loud music or what I like to call “movie sound” when you watch television, consider that adopting a fearful dog may not be your best option. If you commit to taking in a fearful dog, then you also must commit to creating a secure environment for him.

Always go slowly with a scared dog. They are in full-time fear mode, so fast movement will always appear aggressive to them. When you approach them do so in relaxed, non-threatening matter. Speak to them in hushed tones that are always upbeat and positive. Show them love whenever possible, but don’t push it.

Let Them Come to You

While we’re talking about not pushing it, always let a scared dog come to you. Of course, you won’t ignore the dog, but if he’s not feeling it, let him be. Allowing him to control when he approaches you take the pressure off of him.

Before doing any sort of socialization outside of the home, you need to gain your dogs trust. One of the keys in helping a scared dog is showing him that his master is kind and can be trusted. That way, when you begin socializing him and working on his issues, he will have the security of knowing that he can trust you. This is accomplished by a lot of work in the first two areas I mentioned.

Some dogs with intense fear have triggers. For example, if they are terrified of men, they were most likely abused by a man. Knowing these triggers will help you mitigate your dog’s fear as well as show you what areas you need to work on.

After you’ve gained the trust of your scared dog and figured out the source – or sources – of his terror, you need to desensitize him to those triggers. If he is fearful of a certain type of person – man, woman, or child – begin having that trigger type interact with him. Have the type of person he’s fearful of begin by just sitting in the room and speaking to the dog in a quiet soothing tone. When the dog becomes more comfortable, introduce treats. Don’t walk up to the dog, though. Instead, have the trigger person drop the treats near the dog as they talk with him. The main key is to go slowly and never do more than the dog can handle.

A scared dog requires time and patience more than anything else. These dogs require slow movements, constant reassurance, and creating an environment that feels safe and secure. After that, it’s simply going to take time and constant work. Always work towards your goal of socializing him, never allow temper to show through for any reason, and make sure that ANY person visiting your home respects the fact that your dog is fragile and that they also respect the rules of conduct as they relate to your dog.

A Scared Dog can Become a Happy Dog

Have you ever worked with a scared dog before? Share your experiences below!