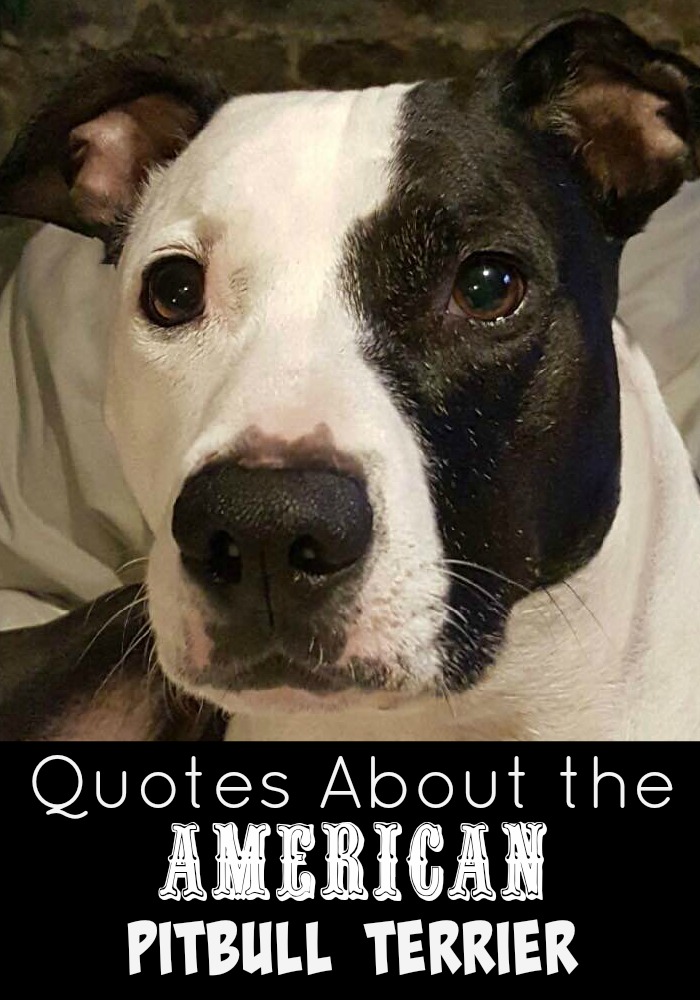 Today I’m sharing a few of my favorite Quotes about the American Pitbull Terrier!

Is there really a greater breed?

They get a raw deal with society, but to get to know one is to love one.

I should know, I was skeptical!

And then we brought home a pit puppy when I was 5 months pregnant (crazy I know!)

This first quote could not be more true!

Quotes About the American Pitbull Terrier

“Pitbulls can’t be trusted, they steal your heart.”

“Every once in awhile a dog enters your life and awakens you to a new understanding, they leave pawprints on your heart and you are never ever the same.” -Lola the Pitty

“There is no such thing as a bad dog, only bad owners who raise them.”

“Sorry my pitbull went against your stereotypes and disappointingly licked your face instead of gnawing it off.”

“Pitbulls are…Beauty without vanity, strength without insolence, courage without ferocity and all the virtues of man, without his vices.”

“The greatness of a nation and it moral progress can be judged by the way its animals are treated.” -Ghandi

“I have a dream that one day the Pitbull Terrier will not be judged by the name of it’s breed but by the content of their character.”

“I am a survivor.  I never lost my heart.  They tried to take it, and nearly ripped it apart.  But I refused to break, I’m not as weak as man.  They would beat me daily, but I’d never bite their hand.  That’s what makes me different, from the men who turned on me.  They are the ruthless killers, and that’s something I’d never be.” -Savana Frame

“Judge the deed not the breed.”

“Whoever said diamonds are a girl’s best friend, never owned a pitbull.”

“I asked God for a best friend, and He gave me a pitbull.”

“The biggest muscle in the pitbull is their heart.”

“They say I’m a monster.  They say I can’t be trusted.  They even say I should be killed.  She says she loves me and calls me her best friend.”

“When it comes to pitbulls, the beast is often the two legged animal at the other end of the leash.”
I personally think there are no better dogs than pitbulls (don’t tell my chihuahua I said that!)  There is a reason they were once referred to as the nanny dog.  It is really sad how they have such a bad reputation.

Do you have any favorite quotes about the American Pitbull Terrier?  Share with us in the comments below!  We love pittie quotes!