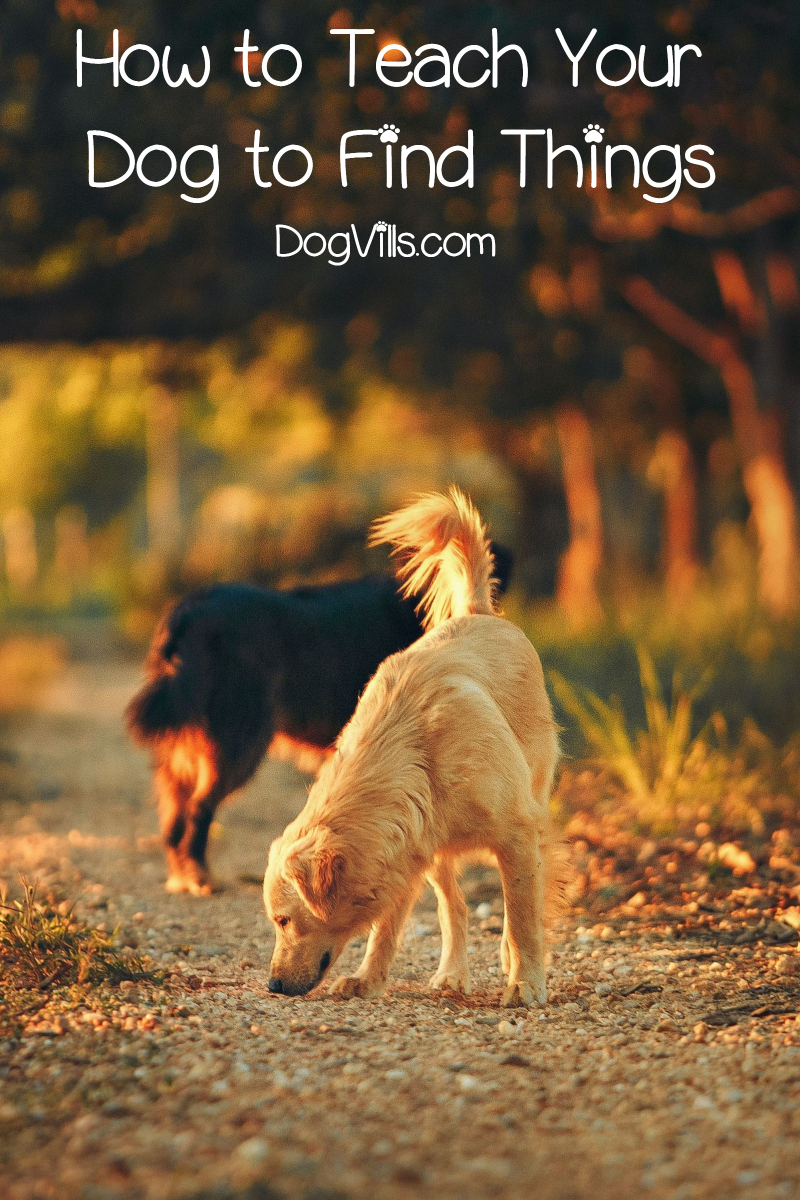 If you want to know how to teach your dog to find things, give nose games a try!

Nose games are a great way to provide both mental and physical stimulation for your dog.

Many people think of nose games and immediately assume that it’s a difficult thing to teach.

However, as with most training, it sounds far more difficult than it actually is.

What are Nose Games?

As the name implies, nose games are fun training games that engage your dog’s sense of smell.

The simple act of seeking out an object or identifying a scent helps keep their brains active and interested!

The reward of a Kong filled with peanut butter, a toy, or simply a treat to say good job, is physically rewarding to them.

Dogs live their lives by their noses.

Any dog owner knows that the first thing their furry friend does when he goes outside or enters a new environment is to start sniffing at everything.

Our dog’s noses are their primary sense for interacting with the world, and it’s no wonder.

Unlike humans, who have around 6 million olfactory receptors, dogs have up to 300 million. On top of that, the part of a dog’s brain that analyzes scent is 40 times bigger than a human’s.

That’s why our dogs can find toys and treats that have been lost in the couch or under a rug even when we’re absolutely sure nothing’s there.

We don’t smell anything, but that toy or treat is like a blazing beacon of scent to our dogs.

Because of this scent-driven existence, nose games are a great way to keep your dog entertained.

Training your dog to use his nose as a game is actually incredibly easy, even though it might seem daunting to you. The process is exactly the same as training any other command.

In fact, in many cases, it’s even easier to teach your dog how to play nose games because he’s already hard-wired to use his snoot for almost everything.

Here’s how you do it.

Step #1: Start with a strong aroma

Start with something with a strong aroma such as his favorite treat. Popcorn also works well.

Step #2 Give the sit command

Have your dog sit in his stay position while you take the treat around the corner or anywhere slightly out of his line of sight.

Step #3 Stick close to him

Stay relatively close to him in the beginning, as you training him to play nose games.

You want him to associate the act of finding the object with your training session, so it’s important that he finds it immediately.

After you’ve placed the object tell your dog to “go find it.” He’ll already be eager to get to the treat he saw in your hand, and because you placed it close by, he’ll find it immediately.

Step #5: Heap on the Praise

As soon as he finds it, praise him liberally. Repeat this process until he understands the command associated with what he’d instinctively do anyway.

After that, repeat again, but instead of placing the treat close by, move it progressively further away from him.

Eventually, this can turn into a nose game of epic proportions for your dog.

After he has this game down, he’ll be ready to explore a world of fun scent-based games.

Other Fun Nose Games for Your Dog

Find the food is the game we just talked about.

It’s a great introductory game for teaching your dog how to use his nose for games.

It’s easy to learn, and it prepares him for using his nose for other games.

Once he knows that one, he can learn all kinds of games that will keep both him and you entertained. There are quite a few, so let’s go over them.

Essentially Find the Food on a smaller scale.

Pick the hand is a great game to play because it promotes solid bonding between you and your dog, as it’s very interactive.

As he gets better, keep your hand closed until his nose looks “alert” and he’s really “on” the scent of the treat in your hand.

This teaches him that the treat location varies and can only be found by scenting it out.

This is not a game that you train your dog in. Rather, it’s a game that takes advantage of your dog’s natural desire to find out what’s new in his environment.

Before going further, it’s important to note that you should only play this game outside, as many dogs will instinctively mark anything that smells like another dog or animal.

Eventually, he’ll pick up the scent and search out what’s making it.

Then, both you and he will be treated to lots of sniffing as he tries to suss out just what that smell is.

Hide and seek is a great game that uses you as a treat.

You can play it both indoors and outdoors, making it one of the more versatile nose games for your dog.

Check out the video below, then read on for steps on how to play:

To play outdoors, find a dog-friendly area with places to hide.

Going to a dog park at hours when there are no other owners and dogs around is a great spot.

You can also choose a wooded area well away from roads and other hazards.

One thing to note is that this is not a great outdoor game to play if your dog has a strong prey drive or is prone to wandering.

The last thing you want is for your dog to chase after a squirrel or decide that you’ll be fine and go off exploring.

This builds on the Pick the Hand game. Find two or three mug-sized containers for this game.

Make sure they aren’t breakable or made of paper. A glass might break if your dog knocks it over, and paper can just be crushed when your dog picks.

Finally, add the last cup, and repeat. In no time at all, your dog will be a master of this game.

Unlike our dogs’ ancestors, wolves, who have to work for their meals, our dogs always have their dinner ready to go at the same time in the same spot.

This game switches that up a little. It provides excellent mental stimulation because it changes a key part of the dog’s schedule.

Eventually, your dog will become so good at this game, that you can move his food to the other side of the house and call him for dinner.

It will take him a little longer to find it, but when he does, he’ll have had a fun nose game that offers a BIG reward at the end.

Another of the nose games that take advantage of your dog’s natural instinct to hunt by smell, scent trails are an excellent way to combine physical and mental stimulation.

Show him the first piece of paper or cloth to get him started if necessary. As he follows the trail, praise him liberally until he finds the ball or toy.

Then have a game of fetch as the big payoff.

Repeat this process, as well, slowly reducing the trail length. Eventually, your dog will be able to find his dog or toy without any trail at all.

Nose Games Enrich Our Dogs’ Lives and Ours

Nose games are fun for both our dogs and us.

These games give our dogs both mental and physical stimulation, and they make for great bonding time between both owner and dog.

If you’re looking for a new way to have fun with your dog and give him some serious enrichment, give these nose games a try. You’ll both love them.

Do you have any other favorite nose games or tips for how to teach your dog to find things? Share below!