Is it true that Siberian Huskies aren’t loyal to their owners?

Dog loyalty is often something that comes up when people talk about Huskies.

The breed has developed a certain reputation in some circles as being a disloyal breed that really only operates on a self-motivational level.

This is a completely false idea.

After reading yet another question about the loyalty of Huskies, I thought it was time to write a post on this breed and where they fall in the dog loyalty spectrum.

The first thing we need to do is define loyalty. Many people mistake a clingy dog for a loyal dog. While clingy dogs are generally loyal, it doesn’t mean that all dogs who are not clingy are not loyal.

Clinginess is a personality trait, not a sign of loyalty. Different breeds have different ways of being in the world.

Lap dogs, for example, want to be next to or on their owners at all times. They want that constant contact.

Loyalty is different from being clingy.

Frankly, I have never come across a disloyal dog. Loyalty is simply a shorter way of saying that a dog loves his family – or pack – and that he wants to be with them. B

eing with them doesn’t have to mean being on top of them. It can also mean being in the same general area as their family. A dog doesn’t need to be an excessive cuddler or have separation anxiety to be loyal.

Dog Loyalty and the Husky

They love their families, and their lives center around that. Huskies got a reputation for being disloyal because of how friendly they are with other people. It’s even in the AKC guidelines that Huskies should be friendly and outgoing.

Your Husky is highly unlikely to deter a home invasion. In fact, he’s more likely to welcome the intruders into your home while begging them for treats. That friendliness towards strangers coupled with the Husky’s independent and often stubborn nature has earned them the erroneous reputation for being disloyal. 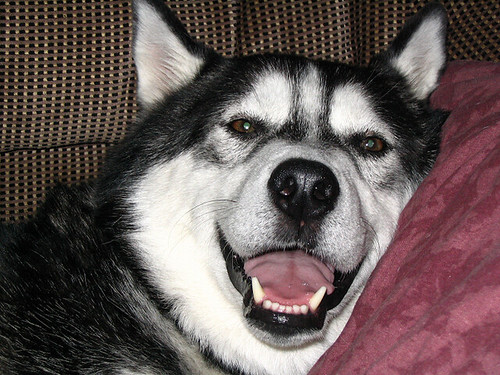 They are absolutely different.

While the Husky is a loving, loyal, devoted breed, it is also a highly independent breed with an intense stubborn streak. Some Huskies will lay on top of their owners for television time, while others will lay on the nice, cool tile in the kitchen. It doesn’t mean one is more loyal than the other.

Do you have a husky? What would you say to someone who says that Siberian huskies aren’t loyal to their owners? Share below!