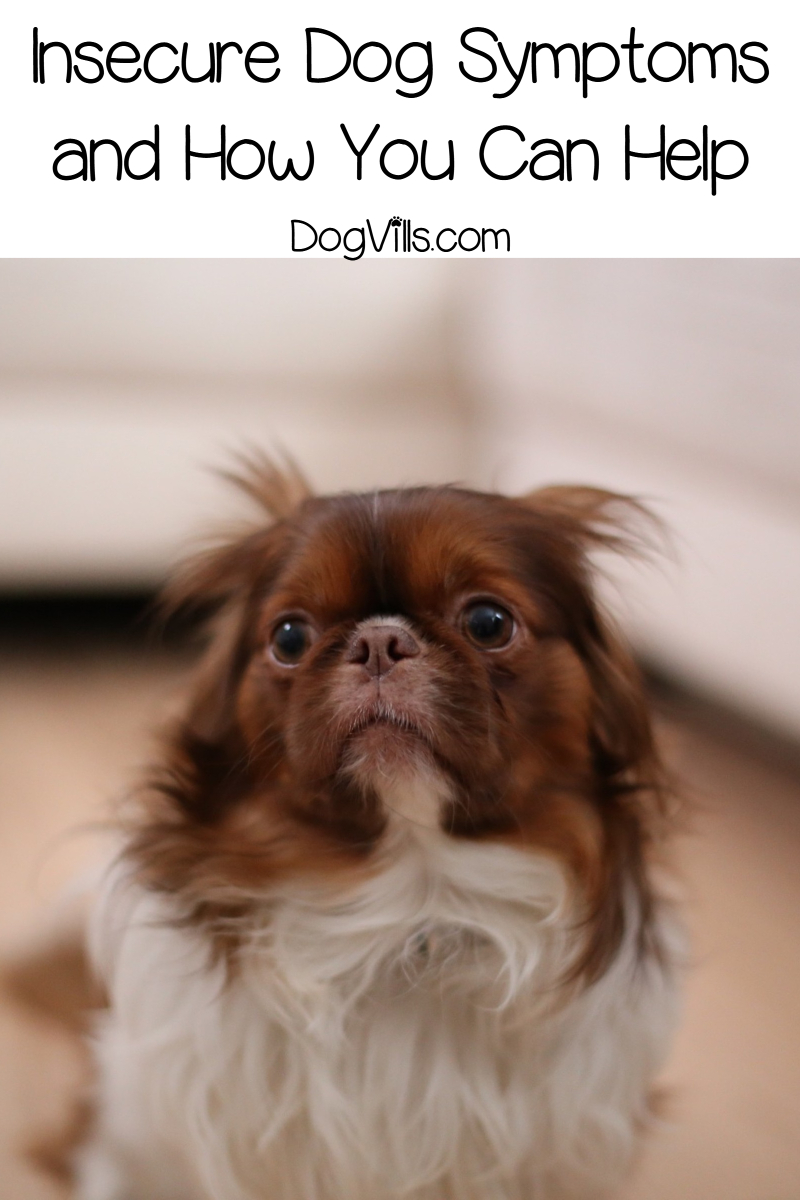 Insecure dog symptoms are important to spot and understand.

These symptoms go far beyond occasional separation anxiety and can wreak havoc on your dog’s life.

So, today we’ll look at what they are, what causes them, and what to do about it.

Let’s get started, we have a lot to discuss!

An insecure dog isn’t the same thing as a dog who has occasional stress or worry.

Insecure dogs are worried all the time. Every situation is a new source of fear for them.

While these insecurities can occur for a variety of different reasons, one constant remains the same: we need to do everything we can to help our dogs overcome this propensity for stress around every corner.

So today, we’ll be looking at insecure dog symptoms and what to do about them.

What Causes Insecurity in Dogs

Before we get into all the symptoms associated with insecurity in dogs and how we can help our furry friends, it’s important to understand where the insecurity comes from.

Knowing as much as possible about what creates insecurity in dogs can help you address your dog’s issues and, hopefully, help him become less stressed and fearful on a daily basis.

If you adopt a dog and he shows signs of insecurity, it could be abuse-related.

The unfortunate truth is that many dogs at shelters have been abused either by active mistreatment or by simple neglect.

These dogs are often distrustful and fearful of humans in general, or they might be distrustful of either men or women specifically depending on who abused them and how.

Socialization is not only a way for dogs to learn their manners.

It’s also a way for dogs to understand that the world and the creatures in it are not things to be feared.

Without proper socialization, every new person, dog, and the situation can become a potentially dangerous situation in a dog’s mind, causing them to become stressed and anxious.

Some dogs, even dogs that have had no trauma whatsoever in their lives, suffer from separation anxiety.

This anxiety is fueled by their instinctive need to be part of a pack.

Separation anxiety is an overly abundant amount of this need, for lack of a better description.

While we are with our dogs, everything is wonderful, but as soon as we’re out the door, their world begins to fall apart because the pack is gone.

Even the most well-adjusted dog can be fearful of certain things.

In many cases, an otherwise laid back dog might experience extreme stress when inundated with unfamiliar, and often extreme, sensory input.

This is especially true when in unfamiliar environments.

In some instances, dogs are born with a propensity for anxiety or depression.

This may sound like a cop-out, but it’s absolutely true.

Just like people, dogs can be born with personality quirks and challenges that present problems for them on a daily basis.

Just like humans, these dogs can benefit from behavioral therapy as well as medication when appropriate.

Oftentimes, illness or disease can lead to insecurity in dogs.

The pain or discomfort from sickness or disease, whether it be acute or chronic, can often cause a dog to have higher stress levels.

They are in a constant state of tenderness or pain and will begin to avoid people and other animals in an effort to limit any contact that might lead to further pain or discomfort.

Insecurity in dogs can also be caused by age-related issues such as vision and hearing loss or dementia.

The loss of sight or hearing can cause dogs to feel disoriented and lost in their own world until they become used to it.

In the case of dementia, dogs will often “get lost” in the home which leads to anxiety.

There are tell-tale signs of a dog who is suffering from insecurity.

The signs are obvious if you know what to look for.

Knowing these signs can help you recognize what your dog is facing more quickly and start helping him better interact with the world around him.

Many insecure dogs hide from the stimuli that are causing them worries. Insecure dogs will often high under beds or behind furniture.

They may also crouch in the corner by themselves in an attempt to protect their flanks and back.

They may also lower themselves to the ground in an attempt to make themselves look smaller.

All animals only have two responses to stimuli that cause them stress: fight or flight.

If a dog can’t run from something, the only thing left is to fight. Insecure dogs are quick to snap, snarl, bare teeth, lunge, or present a combination of these actions.

In these instances, the dog is letting everyone know around him that he will fight if needed and that he wants to be left alone.

The flip side of aggression is submissiveness. Some dogs will take another approach to their stress.

They will attempt to make it know that they themselves are no threat to anything around them.

Signs of submissive behavior include hanging the head, lowering of the tail or tucking it between the legs, and even urination.

In the wild, wolves will urinate to show their subservience in the pack.

Other symptoms that an insecure dog might display include:

These symptoms are often found in conjunction with other symptoms of insecurity.

While not every case is the same, insecure dogs can often be helped to one degree or another with varying approaches from behavioral therapy to medications when necessary.

In all of these cases, success levels will vary, but in almost all cases, you can help your dog experience some relief from the anxiety that plagues him.

Before you can begin helping your dog, you have to get him to a place where he can be helped.

If your dog is nervous around crowds, don’t have anyone over for a while.

If he gets nervous when he sees a new dog, take him for walks around the yard instead of the neighborhood.

The rule of thumb here is to stay away from whatever triggers him.

Allow him to decompress and then begin the process of helping him better interact with his world.

This is something that most owners do without even realizing it.

Our natural instinct as owners is to try to placate our dogs when they’re stressed. Never ever do that.

Rather than calming him down, playing to his stress only makes it worse.

It actually sends a message that he is absolutely correct in his fear and that there is something in his world that is highly dangerous.

Simply ignore his behavior. It may feel mean to you, but it’s absolutely the best thing for him.

The great thing about socialization is that it can be done at any age. Old dogs can and do learn new tricks.

If your dog hasn’t been properly socialized for one reason or another, you can begin the process and help him learn that the world isn’t a place to fear.

Start slowly, introducing your dog to one new person or animal at a time, allowing him to become used to seeing new people or animals.

Don’t push him to make contact, simply have the new stimuli in his environment.

As he becomes more confident in his safety, he may initiate contact – don’t push it. Let him go at his own pace.

As time goes on, begin introducing him to more and more stimuli, slowly working your way up to outings and visiting places where people and dogs congregate like a pet store or dog park.

Be a Good Leader

This doesn’t mean overpowering your dog. Do not be overly aggressive on any level. Rather try to put yourself at his level – not above it.

Wherever you are and whatever you’re doing with your dog, always be confident about the environment.

Do not show any worry that your dog might have a bad reaction.

Dogs can sense our vibes, and if you act worried, your dog will absolutely become stressed and insecure.

If you don’t take anything else away from this post, take this to heart. Never punish your dog for his insecurities.

He has no control over it and punishment will only make it worse.

Dogs don’t understand the concept of punishment, and even if they did, punishing him for behavior he has no control over will not work and only makes the problem worse.

Exercise patience and caring with your dog. Don’t allow frustration to overcome you.

In some cases, medication may be necessary to help your dog with his anxiety.

There is nothing wrong with medicating your dog when necessary. You have not failed as an owner.

In these cases, no amount of training or desensitization will help.

The best thing you can do for your dog is to give him medication that will alter his brain function so that he can be more at ease with his world.

Your vet will tell you when it’s time to try medications.

In many cases, insecure dog symptoms can be lessened with items that can help him feel either more secure or allow him to work off excess nervous energy.

Originally designed for dogs with a fear of storms, thundershirts are actually quite helpful for many dogs with anxiety.

The pressure of the shirt acts as a calming mechanism for the dog.

There are a variety of pheromone diffusers and collars on the market.

These diffusers release a “happy” pheromone into the air which can help calm a nervous dog.

In much the same way, pheromone collars react to a dog’s body heat, releasing these pheromones near his head, where he will inhale them.

It’s important to note that these are for use with anxiety in dogs with NO aggression component.

Dog chews are excellent tools to help you combat your dog’s anxiety.

Anxious dogs often have an excess amount of nervous energy which makes it even harder for them to calm down.

Dog chews allow your dog to work off some of that energy and provide a bit of a distraction from whatever is causing his stress levels to rise.

Remember when I said that dogs are pack animals and they look to their fellow packmates for cues?

Training takes advantage of that ingrained instinct and allows you to become the leader of the pack.

This strengthens your bond with your dog and allows you to build a relationship wherein he looks to you for all of his cues.

This leads to less stress for your dog in any given situation because he knows if you’re not stressed he shouldn’t be stressed either.

Start with basic obedience training with your dog, even if he already knows commands.

Practicing basic commands like sit, stay, leave it, shake, and others will establish your role a leader.

Plus, the treats and praise you provide your dog will help him build more confidence in himself along the way.

Whether your dog is afraid of fireworks and storms or the world at large, you can help him reduce his anxiety level.

Through socialization, training, and in some cases, medication, you can help alleviate insecure dog symptoms in your pooch.

Look for the signs and consult with your vet.

They can help you build a program that will help you reduce your dog’s anxiety and allow him to enjoy his world.