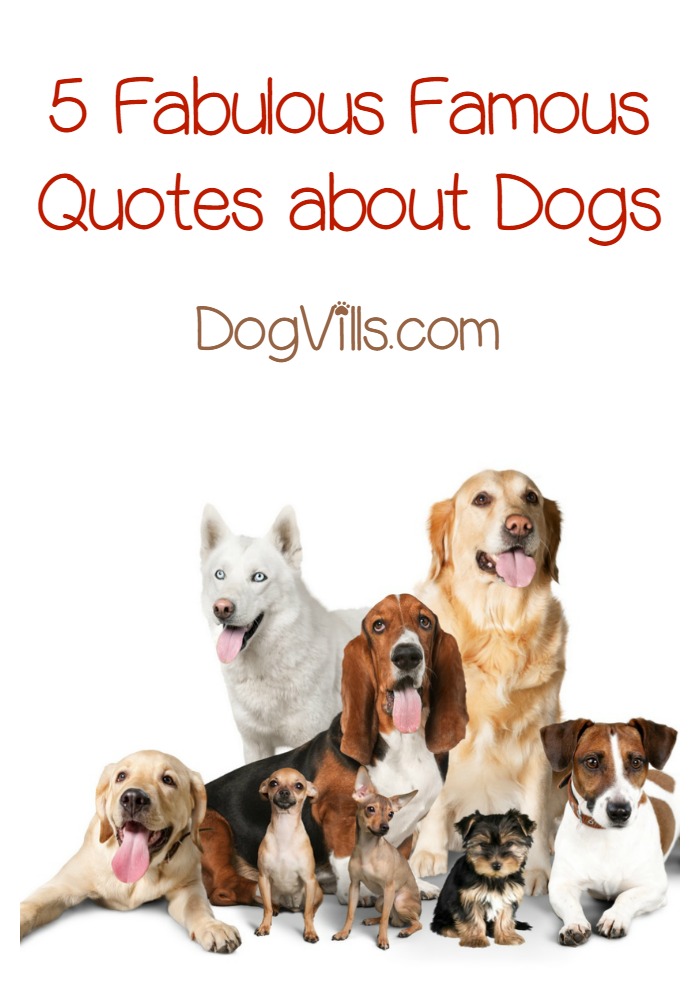 Looking for famous quotes about dogs? We’ve got you covered! Few animals inspire as much passion and loyalty as our canine companions. While words can’t really describe how much we love our pooches, these quotes do a pretty good job of expressing the place they hold in our hearts.  Check out some of the most famous quotes about dogs.

Related: Our Favorite Famous Quotes about the Lovable Pit Bull!

“I think dogs are the most amazing creatures; they give unconditional love. For me, they are the role model for being alive.” Gilda Radner, born on June 28, 1946, in Detroit, Michigan and passed away on May 20, 1989, in Los Angeles, California from ovarian cancer at the age of 42. Gilda was an actress and a comedian, best known for appearing on Saturday Night Live from 1975 to 1980.

“Heaven goes by favor. If it went by merit, you would stay out, and your dog would go in.” Mark Twain, born on November 30, 1835, in Florida, Missouri and passed away on April 21, 1910, in Reading, Connecticut from a heart attack at the age of 74. Tom was an author and humorist, best known for his 1876 book The Adventures of Tom Sawyer and the 1885 book Adventures of Huckleberry Finn.

“You think dogs will not be in heaven? I tell you, they will be there long before any of us.” Robert Louis Stevenson, born on November 13, 1850, in Edinburgh, Scotland and passed away on December 3, 1894, in Vailima, the Samoan Islands from a cerebral hemorrhage at the age of 44. Robert was a novelist, essayist, travel writer, and poet, best known his books, the 1883 Treasure Island, the 1893 Kidnapped and the 1886 Strange Case of Dr. Jekyll and Mr. Hyde.

“It is scarcely possible to doubt that the love of man has become instinctive in the dog.” Charles Darwin, born on February 12, 1809, in Shrewsbury, England and passed away on April 19, 1882, in Kent, England from heart failure at the age of 73. Charles was a naturalist and geologist. He is most well-known for his theory of evolution.

“Happiness is a warm puppy.” Charles M. Schulz, born in Minneapolis, MN on November 26, 1922, and passed away in February 2000. Schulz is best known for creating the Peanuts characters, including one of the most beloved dogs of all time, Snoopy.

Do you have any favorite famous quotes about dogs? Share in the comments!