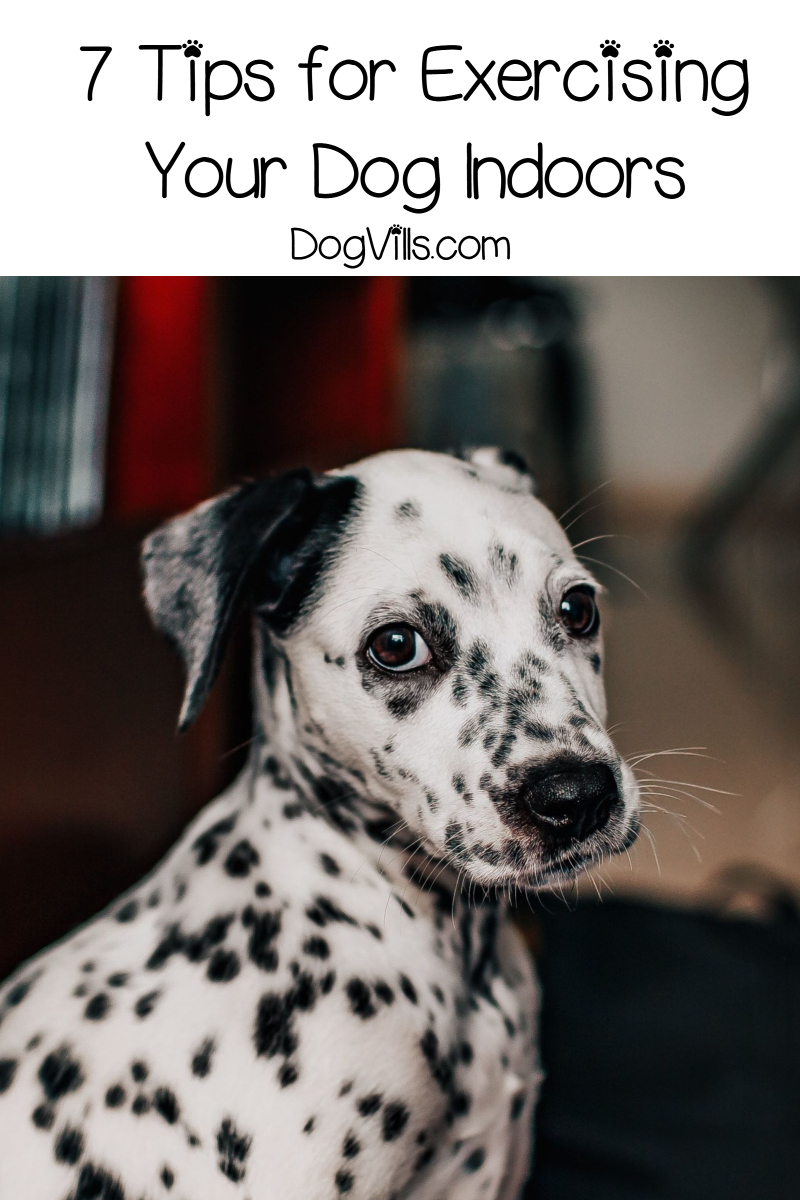 Exercising your dog is usually a simple matter of getting out and going for a walk or playing a game of fetch?

However, if you’re homebound, it can be much more difficult to give your dog the exercise he needs.

It’s easy for homebound people with fenced yards to give their dogs the exercise they need- just open up the door let them run wild!

However, for dogs who live in apartments or row houses, it’s a bit tougher.

Today, we’re going to talk about exercising your dog when you’re unable to leave the home.

7 Tips for Exercising Your Dog Indoors

Exercising your dog is an important part of their physical and mental health.

However when you can’t leave the home, what was once the simplest part of dog ownership becomes one of the hardest.

Without a fenced-in backyard, it might seem like your pooch is doomed to a life of boredom and you’re doomed to life of destroyed pillows.

However, there are ways to exercise your dog that don’t require you to leave the home.

I want to preface this with the fact that some of these will be easy for anyone to do.

Other, though, may be more difficult or impossible, especially for those who are homebound due to an illness or have a physical limitation.

In general, however, there are things on here that will fit almost any dog and any owner.

Doggy scavenger hunts are a great way to keep your dog active indoors. Simply hide small treats across the house and let him go look for them.

Dogs have incredibly keen noses, so this could keep them busy for quite a while if you hide enough treats.

To begin, hide the treats in various rooms in your home.

It’s especially important to hide more than one in the room where you begin the scavenger hunt, so he gets excited about the prospect of finding treats and also understands the game.

Once all treats are in place, take him to the room where the game will begin.

Then, put one treat underneath an object – nearby another couple of hidden treats – while your dog watches.

He’ll find the first, and if you placed the rest close enough, he’ll begin to find more.

Take him to another room and hang out for a while until he starts to find more. Repeat the process throughout the house.

This game keeps him both physically and mentally stimulated, and it’s a great way to get him moving when you can’t go out.

Just make the treats very small or use things like carrots and celery to ensure he doesn’t pack on extra calories.

Hide and seek is an excellent game for keeping your dog mentally and physically stimulated.

Go to another room in your home and hide. Once you’re set up in your hiding spot, call your dog.

If you’ve never played hide and seek with him before, you may have to call more than once.

However, once he starts, he’ll be eager to find you. He may give up before he finds you, but he’ll have expended some energy while he was looking.

Ah, tug of war. It’s the old standby for exercising your dog indoors. Dogs expend a ton of energy while playing this game.

It’s incredibly easy to initiate this game and keep your dog occupied for pretty much as long as you’d like.

Just pick up his rope, and it’s game on.

Depending on your dog’s size, you might need a strong grip to play this game.

In addition, be sure you don’t tug overly hard. You don’t want to loosen any teeth!

Fetch is another great game for exercising your dog indoors if you have a room that is fairly open.

Bonus rooms, basement rooms, and open living rooms are great areas for this.

If your dog loves to fetch, you know the drill. Pick up his ball or toy and have at it.

Pro tip: Move anything that could be knocked over before playing. The object is to keep your dog active, not keep you active with a lot of cleanup!

Keep away is an excellent game for exercising your dog indoors.

This game requires two people, and it’s exactly the same game you played when you were in school.

You and a partner throw your dog’s ball back and forth to each other while he has fun trying to catch it.

Of course, it’s always nice to let your pooch get the ball or toy at the end of the game so he has a nice reward for all his efforts.

Go For a Walk

Just because you’re indoors doesn’t mean you can’t go for a walk.

Put a leash on your pooch and make a few laps around the house. Walks like these work especially well if your dog is a small breed.

Even a small home or apartment can be a lot of ground to cover for lapdogs and toy breeds.

If you have a treadmill, try putting your dog on it.

Start very slowly, with this one. It might freak your dog out a little bit at first, but many dogs acclimate very quickly to this one.

Put your leash on your dog and attach it to the top of the treadmill.

It is VERY IMPORTANT that you NEVER leave your dog alone while doing this. Always supervise this process and be extremely careful.

As noted, leash your dog to the treadmill and start it up on the lowest setting.

Allow your dog to get used to the movement, and then increase the speed to his normal “going for a walk” speed. Don’t go any faster.

He’s not training for a race, he’s just getting in a little exercise. Let him walk for about 10 minutes, then give him a treat and take him off.

Be aware that some dogs will NEVER get used to this, so your results may vary. Again, supervise your pooch during this treadmill walk at all times.

Whether you have a chronic illness or an injury, there are times when exercising your dog outdoors just isn’t an option.

These 7 ideas will help you keep your dog physically and mentally stimulated without having to leave the home.

So give some of these a try and start exercising your dog indoors now.

What are your favorite ways of exercising your dog indoors when you’re homebound? Share below!