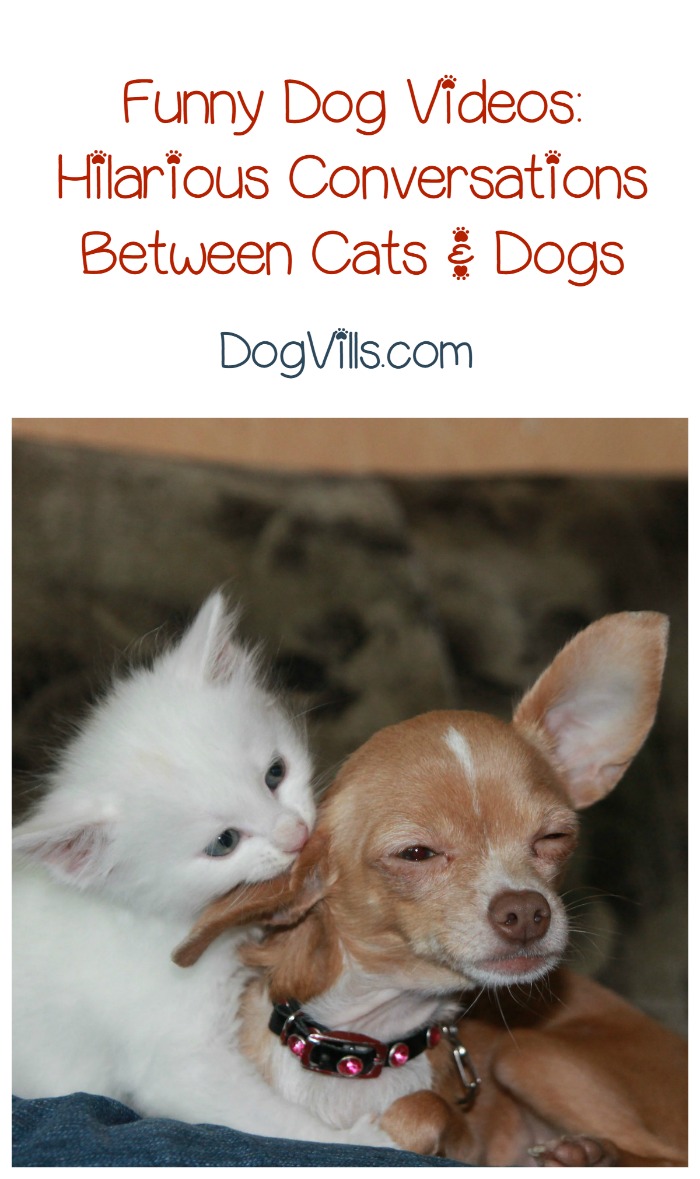 What happens when a cat tries to take on a dog? Today’s funny dog video explores the relationship between two unlikely pals and answers that very question! Don’t worry, no animals were harmed in the making of this video! Check it out, then read on for more funny clips highlighting something that I know I can never get enough of: talking cats and dogs!!

The natural instincts of dogs and cats is to be hostile towards each other. Of course, this isn’t always the case as individual dogs and cats have the ability to enjoy a non-aggressive relationship with each other. Here are some awesome videos detailing the great relationship (or lack of) between cats and dogs.

Talking Kitty Cat 22- Dogs Can’t Talk– This video is 3 minutes, 39 seconds in length with 3,454,958 views to date and uploaded by Talking Kitty Cat on October 21, 2011. In this video, Sylvester, the talking cat, is asked about a chewed up speaker wire that occurred while owner Steve (Stevecash83) was at work. Sylvester says he had nothing to do with the chewed wire. Steve then creates a device that would allow Shelby, the dog, the ability to talk. However, things don’t go exactly as planned.

Talking Kitty Cat 26- No Pets Allowed– This video is 4 minutes, 18 seconds in length with 6,086,249 views to date and uploaded by Talking Kitty Cat on September 1, 2012. In the video, Steve (Stevecash83) has a bit of a dilemma- his landlord is on the way over to perform a house check and he is not supposed to have any pets in his home. The problem? He has two cats, Gibson and Sylvester and one black lab dog, Shelby. The bigger problem? When Steve tells the pets they need to hide, Sylvester isn’t interested in playing that game. Sadly, Gibson died six days after Easter Sunday 2016 from kidney and bladder problems. On Easter Sunday 2016, Gibson became a father to 5 beautiful kittens.

Do you have any favorite funny dog & cat videos featuring talking pets? Share in the comments!