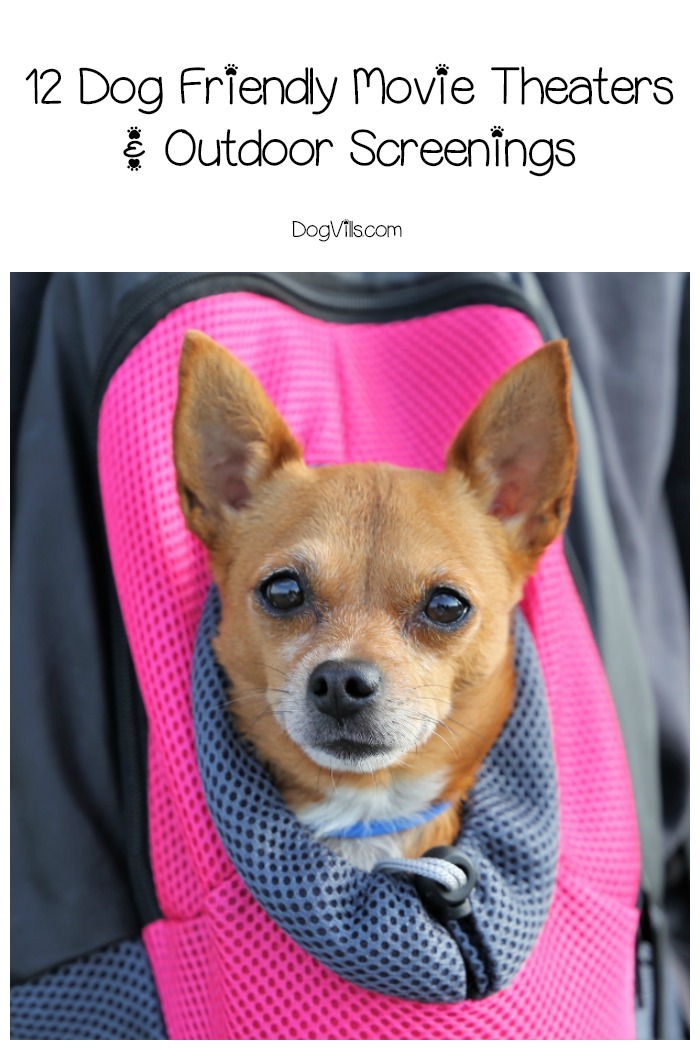 Ever wish you could find some dog-friendly movie theaters so you don’t have to leave Fido at home on family movie night?

Most indoor movie theaters don’t allow dogs inside their theaters, and really, can you blame them?

We love our dogs to pieces but the last thing we want is to have them start barking during the movie, right?

However, when it comes to drive-ins or outdoor movie screenings, many places are glad to welcome your dog.

Every one of these dog-friendly movie theaters requires you to keep your dog on a leash.

In fact, I’d say that’s pretty much a given for just about every place that allows dogs, with the exception of a few pet-friendly beaches and parks.

Also, while we’ve given admission prices when applicable (many of these outdoor screenings are free), keep in mind that they’re subject to change.

Your best bet is to check out the theater’s website for the latest fees and information before you head out with your dog.

Mom and dad took me to see incredibles 2 at the drive in yesterday. I had so much fun! #cascadedrivein #puppies #incredibles2 #goldenpup #goldenretrieverlovers

The Cascade Drive-In is at 1100 East North Avenue in West Chicago.

Movies in the Parks began in 2000 and showcases over 200 movie screenings throughout the city’s 77 parks.

The McHenry Outdoor Theater is at 1510 Chapel Hill Road in McHenry.

Water Flicks is held at the Navy Pier, located at 600 East Grand Avenue in Chicago.

The Central Park Conservancy Film Festival is held at Central Park, in Manhattan, at Frisbee Hill.

We just had to get outside and enjoy the beautiful weather! #lunchview

Red Hook Flicks, held at the Valentino Pier on the Brooklyn waterfront, runs every Tuesday night, from July 10, 2018 through August 28, 2018.

3 years ago today I made the BEST decision I have made thus far in my life and brought my Mop dog home after a month of seeing her weekly. Happy “Gotcha Day” to my best buddy!!!!

The Outdoor Cinema International Film Festival is held at the Socrates Sculpture Park in Queens.

Sunny, high near 95. Heat index values as high as 99. Heat advisory through 9pm tonight. Wooooooooof 🌡️😟 See y'all on the shady side ✌️

SummerScreen is held at McCarren Park in Brooklyn.

You know you can bring your pups to #EatSeeHear, right? All dogs are welcomed with a free biscuit at the door! Check out a few of the cuties we’ve met this season… 🐶🐕🐺🐩🐾

11. Moonlight Movies on the Beach at Alfredo’s Beach Club

The Moonlight Movies are held at Alfredo’s Beach Club in Long Beach and is presented by the Port of Long Beach.

Movies on the Green is held at the Valley Cultural Center’s Warner Center Park in Woodland Hills.

Don’t live in or near one of these major cities?

Check with your own local park or drive-in movie theater to see if they allow dogs. You might be pleasantly surprised to find that they do!

Also, while the majority of indoor theaters do NOT allow dogs, service dogs are the exception.

By law, they have to be permitted. Just remember that an emotional support animal is not the same thing as a service dog and doesn’t have the same legal rights.

Hopefully you have enjoyed this list and have found a great place to catch a movie with your dog!

I mean, there’s no guarantee that your four-legged friend will watch more than 5 minutes of the movie, but you’ll still be spending quality time together.

And, after all, this is what counts, right?

Do you know of any dog-friendly movie theaters? Tell us below!