Carolina Dog temperament, facts, and more are on the agenda today.

We’re going to be diving into the history of this breed to see if they make good pets.

This is an interesting breed with a history that reads like an adventure novel, and they have a personality to match.

So let’s take a look at Carolina Dog temperament, history, and more.

The Carolina Dog is often thought to be a crossbreed or a feral, Dingo-like wild dog.

Both of these ideas are owed to the fact that this dog has only been domesticated relatively recently.

It’s actually better to say it was domesticated again. This compact yellow dog has quite an impressive history.

In 1920, American zoologist, Glover Morrill Allen talked about what he called “Indian dogs” in his article, “Dogs of the American Aborigines.”

In his article, Allen wrote that he believed that these dogs were direct descendants of primitive dogs from Asia.

He believes they came to America when their human companions migrated across the land bridge between Asia and North America.

Later, an ecologist working for the Savannah River Ecology Laboratory of the University of Georgia came across these dogs while doing fieldwork onsite  in South Carolina.

The general consensus is that Carolina Dogs descend from Asian dogs brought to the Americas in prehistoric times and were able to adapt to the conditions of the American South.

The breed is so recently redomesticated, as it were, that it was only officially recognized as a breed in 1996 by the United Kennel Club.

In fact, there are still cases of wild Carolina Dogs still inhabiting parts of the Southeast.

That, combined with the fact that this breed had to adapt to life outside of human help is why many call this ancient breed “primitive.”

This designation means that the Carolina Dog has retained much more of its wild, undomesticated nature than other common dog breeds. 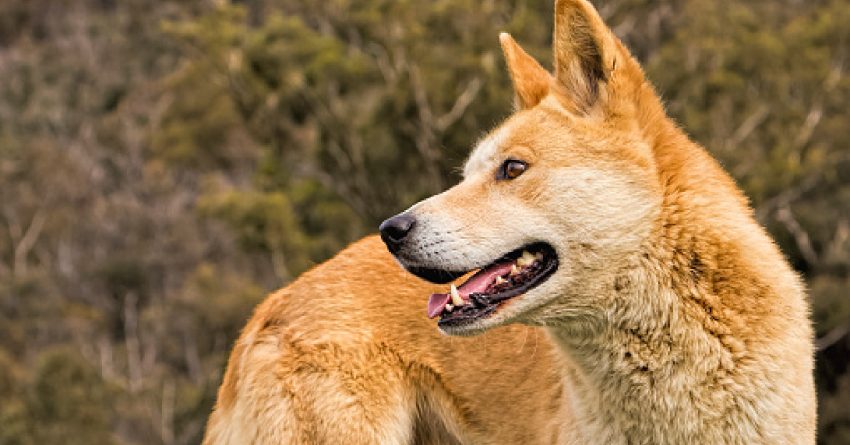 Over the years, the Carolina Dog has been called by many names including American Dingo, Yellow Dog, Yeller Dog, Dixie Dingo, Indian’s Dog, North American Native Dog, and Ol’ Yeller.

Let’s check out some quick facts.

How to Know if My Dog is a Carolina Dog

Often times, people don’t know if they have a Carolina Dog or a mutt.

That’s largely because the look of a Carolina Dog is not as distinctive as some other breeds like Shepherds, Boxers, and others that have a long history of selective breeding.

Carolina Dogs have remained unchanged for centuries and that lack of human tinkering has led to a dog that sort of looks like a mutt.

They are often mistaken for crossbreed of German Shepherds and some sort of hound due to their muscular but mid-sized bodies and their large ears.

Outside of having a DNA test, the best way to make a somewhat accurate assessment of whether you have a mutt or a Carolina Dog is to judge their actions.

Let’s go over some things to watch for.

This breed is high energy. In fact, he’ll probably have more energy than any dog you’ve ever seen.

He also has an exceptionally high prey-drive, however, he won’t just dart after his prey.

This breed still retains all his hunting instincts that he needed to survive. He’ll stalk his prey before initiating a pursuit.

The breed will always have that signature fishhook tail.

If your dog’s tail is straight, you don’t have a Carolina Dog.

In addition, he uses his ears differently than other breeds.

His large ears are highly sensitive and he will rotate his head slightly to help him determine the location of sounds.

This is different behavior than the classic, adorable, German Shepherd head tilt.

Finally, if you have a Carolina Dog, daily walks and tons of fetch probably won’t be enough for him.

In addition to his high energy, he has a propensity to roam.

It’s not uncommon for these dogs to range, and in rural areas where there are no leash laws, it’s common for them to be gone all day long exploring and ranging.

Even with a description of appearance and behavior, it’s still a big help to have a visual reference, so here are some pictures of Carolina Dogs that were shared on Reddit. 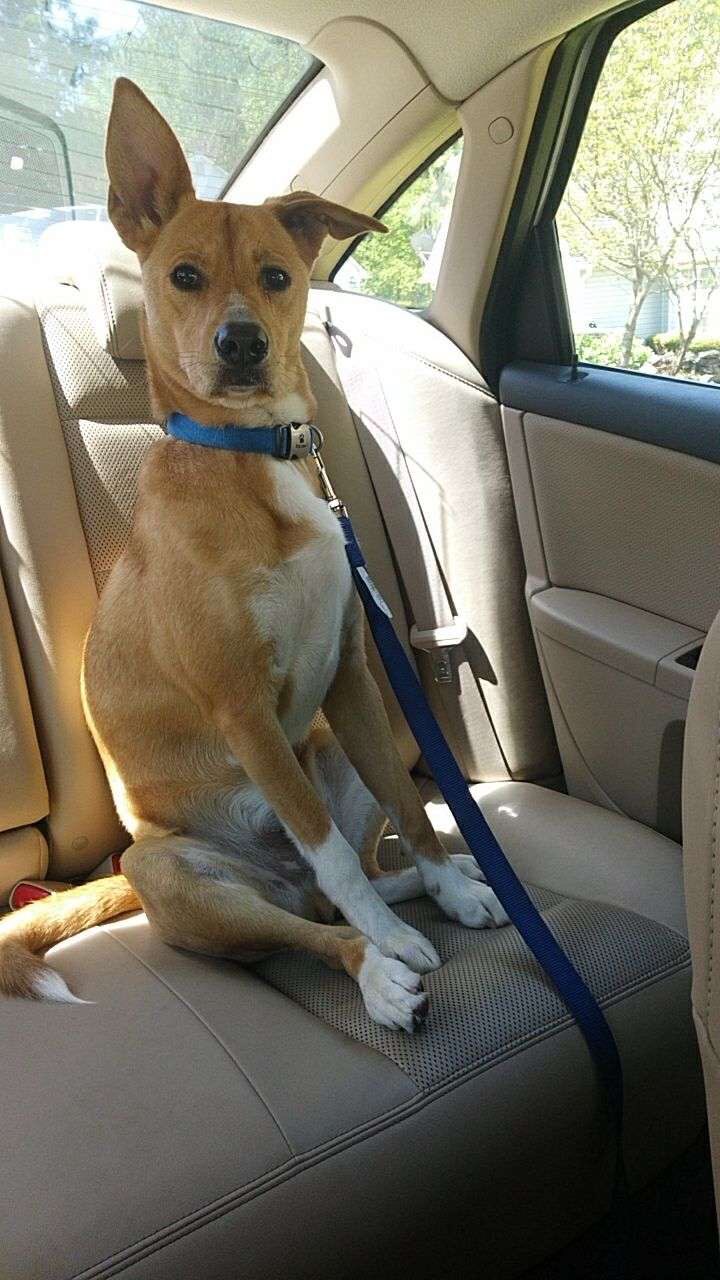 The Carolina Dog is a formidable hunter and in a real sense on partially domesticated in the truest sense of the word.

They retain the majority of their instinctive behavior and are a true primitive breed.

That being said, they have a gentle temperament.

This breed may excel and hunting prey, but they have a strong bond with their group.

Contrary to what you might think from their history, this is a very well-tempered breed that is not aggressive toward people or other dogs.

While recent studies have shown that most domesticated dogs aren’t pack animals in the sense that we once thought, the Carolina Dog is a consummate pack dog.

This is a breed that has relied on their packmates to help them hunt and thrive until only relatively recently, and it shows. 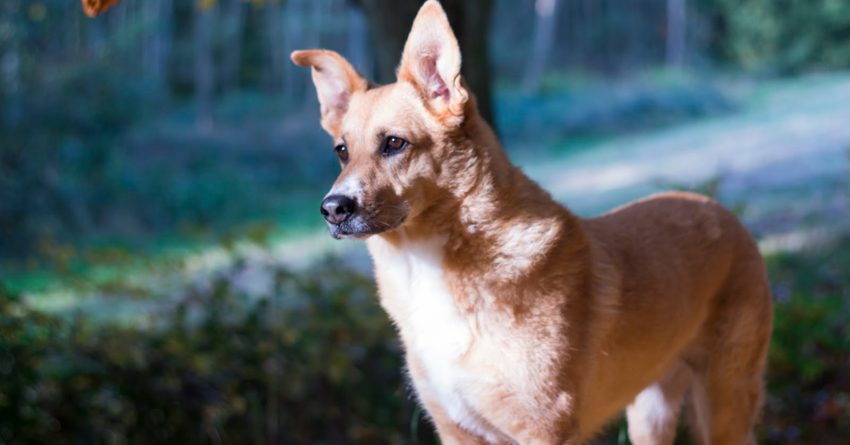 Are Carolina dogs aggressive towards other dogs?

Although they are skilled hunters, they get along well with anything that isn’t “prey.”

It’s also a breed that is perfectly at home with other dogs and even children.

Because of their high prey drive, it’s important to socialize Carolina Dogs early, introducing them to as many different people, places, things, and animals as possible.

This early socialization teaches them that not everything that isn’t a human or another dog is something for them to hunt and eat.

Do they bond with their owners?

In addition, while they bond closely with their family, they will hold their judgment for new people until they’re satisfied that they can be trusted.

Once they’ve established that the newcomer is fine, it’s back to business as usual.

Because of their lack of aggressiveness toward people and other dogs and the close bonds they create with their families, the Carolina Dog is a breed that makes for a great family pet.

Another bonus of this breed is that they are low to moderate barkers. Essentially, this breed only barks if they have a reason.

They are not chronic barkers, yelling at the top of their lungs at shadows or other dogs.

How to Train a Carolina Dog

Carolina Dogs are very smart. They are also very independent.

Although this independence can sometimes slow training at certain points, overall, the Carolina Dog is easy to train.

Their intelligence is such that if you know how to approach their training properly – firmly but with lots of positive praise – you should have no problem.

One thing that will please owners of Carolina Dog puppies is that this is a particularly fastidious breed.

In fact, they’re one of the easiest breeds to housebreak.

How to Care for a Carolina Dog

Because they have not been selectively bred over centuries, only the strong have survived to breed.

Plus, there has been no human tinkering to engineer desired traits that may not be healthy for the dog.

This is why they have such a long lifespan, coming in at between 12 and 15 years on average.

Proper medical care for a Carolina Dog is generally feeding them a high-quality diet, exercising them regularly, and getting regular checkups at the vet.

Grooming this breed is even easier than maintaining their health.

All you really need is a vacuum and a brush.

This is not a “stinky” breed, and they only require bathing when they’ve gotten exceptionally dirty.

They are exceptional self-groomers, and they only need weekly brushing to ensure that their natural skin oils are evenly distributed throughout their coat.

You’ll actually be grooming your home more than your dog with this breed.

They shed profusely, so you’ll have to vacuum often.

Where to Get a Carolina Dog

Carolina Dogs are available for both purchase and adoption. Google can help you find a reputable Carolina Dog breeder near you.

It might be harder than finding a breeder for more traditional dogs, however, as this is a rare breed.

Surprisingly, Carolina Dogs are not expensive.

Equally as surprising is the fact that you can find these dogs at rescues.

Petfinder has a Carolina Dog profile and rescue page with Carolina Dogs for adoption in several areas.

There are other adoptions sites all over Google, as well, that can help you find a Carolina Dog for adoption.

We’d love for this section to be more specific, but with such a rare breed, Googling with your zip code is really your best bet for finding a Carolina Dog for sale or for adoption.

The Carolina Dog makes an excellent family pet, which might surprise some considering his wild heritage.

Although they’re exceptional hunters, their true pack mentality makes them accepting of other dogs and people.

With early socialization, these dogs can be shown that cats and other smaller animals are not food, as well.

Finally, their exceptional health and longevity, coupled with their intense loyalty make them excellent family animals, especially for those with active lifestyles or rural property where this breed can roam and run.

Are you personally familiar with the Carolina dog breed? Share your thoughts and experiences below!