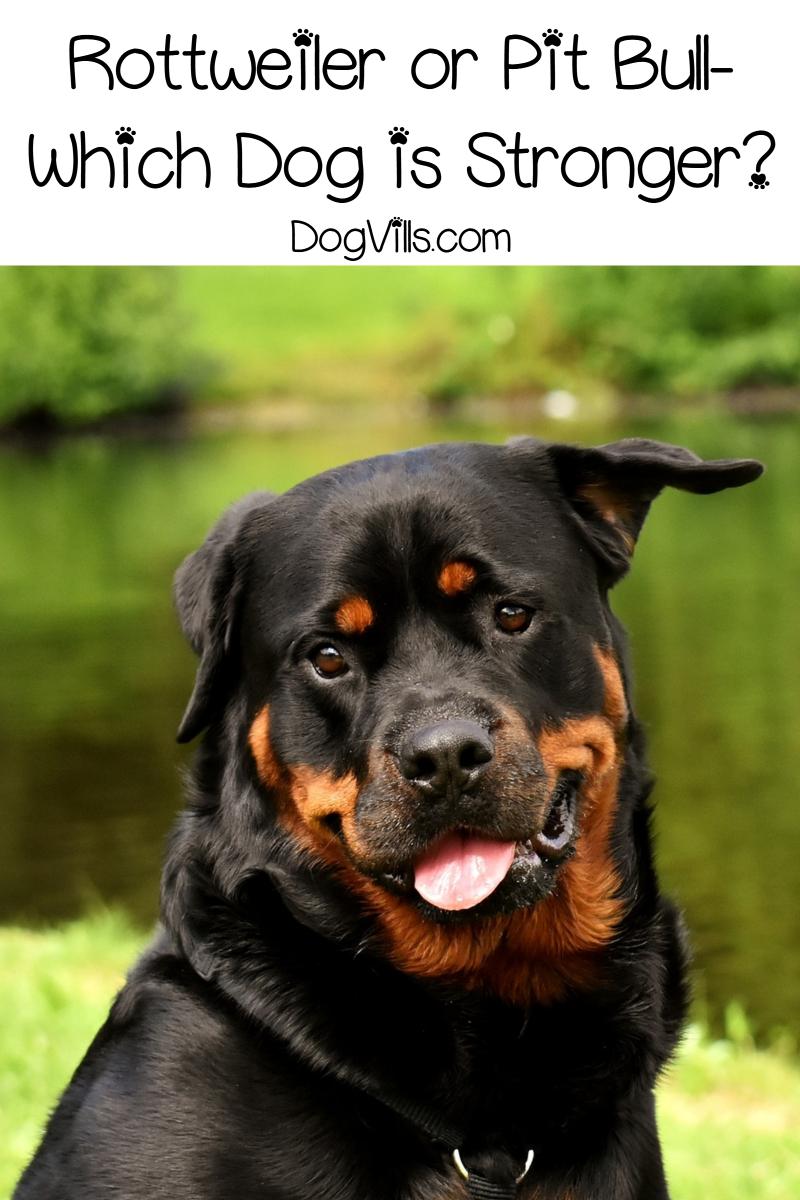 The answer may surprise you!

Read on to find out what it is, and whether either dog is considered the strongest of all!

You may also like: Top 5 Misconceptions About Pit Bulls

Rottweiler or Pit Bull- Which Dog is Stronger?

Rottweiler or Pit bull-which dog is stronger? Well, this is a rather interesting comparison.

Of course, simply comparing the two breeds might not paint a clear image of their abilities and prowess. This is because of their different roles.

Rottweilers were originally bred to herd livestock and pull heavy carts of meat to market. However, their loyalty and protective nature earned them a promotion to guard dog.

While pit bulls are also often used as guard dogs, they were originally bred to hunt large game.

Both dogs deliver upper-echelon performances in their respective fields. Which one is stronger overall, though? To find out, we have to dig deeper.

Let’s start by comparing weights. It won’t paint a complete picture, but it’ll give us a good idea of each dog’s “power potential.”

How strong is a pit bull compared to a rottweiler?

Generally, a pit bull weighs around 30 to 70 pounds. However, Rottweilers weigh about 100 pounds.

Presumably, the weightier breed should be stronger, don’t you think?

Let us take a case of a 70-pound pit bull going against a 100 pound Rottweiler, which one do you think would prove stronger?

Get me right, though; this is just a comparison of their strength based on weight.

However, when it comes to their fighting ability (in a protection scenario, we DO NOT condone dog fighting in any form), their strength might not really be the determining factor.

This is because pit bulls are hunters. They are more tenacious and agile. In other words, they don’t easily give up.

That’s not to say they’re vicious or any more likely to attack you than any other breed when properly trained.

Sadly, there are still those who use them for sport or train them to attack. In those cases, a rottweiler isn’t likely to “win” against a pit.

Bottom line, while a rottweiler may be stronger when it comes to bite power and sheer strength, poorly trained pits are capable of doing more damage because they simply don’t let go.

Now that we answered the main question, I feel like we have to delve into pit bulls a bit more to fully grasp the why behind it, starting with a better understanding of what a pit bull actually is.

We’ll break this down into the most frequently asked questions about pit bulls. It’s really the easiest way to give you a complete overview of their strength and power.

Finally, a simple answer! No, they’re not. Well, most of them aren’t, anyway. The American Pitbull Terrier is the only pure breed.

In reality, a pit bull is a cross-breed between a terrier and a bulldog. He boasts the strength of a bulldog and the aggressive character of a terrier.

There’s a reason why we say “as angry as a terrier.” Once provoked, they are quite tenacious. That is what happens with Pit bulls too. Which brings us to…

Help, My Pit Bull is too strong!

You are probably worried about your Pit bull being too strong, and for a good reason. Even though they’re not aggressive by nature, they can give you a run for your money when you let them overpower you.

Don’t believe me? Try walking an untrained pit! I can almost guarantee he’ll be the one walking you.

So, how do you go about coping with a dog that can beat you in any strength competition? Of course, you don’t want to lower their strength, do you?

The most important things you can do are training and socializing your pit.

When trained, pit bulls make very good, loyal and loving pets.There’s a reason they used to be called “nanny” dogs.

I recommend starting with these tips on how to train any puppy to stop biting.

How strong is a Pit bull bite?

How strong is a pit bull bite? Well, how about you try giving them one your hand to bite? (Just kidding). That would, probably, be your worst mistake.

So, ever wondered how much power is behind a pit bull bite? Well, I have the answer for you. Although some people believe Pit bulls have the strongest bites; that is not accurate.

An average dog bites at a pressure o about 320 pounds. However, a pit bull bites at a lesser pressure of about 300 pounds.

Imagine staying for up to 30 minutes between his teeth? Other dogs bite then let go fairly quickly. However, a pit bull will hold your flesh for longer, causing more damage than other dogs do.

Rumors fly around that these dogs bite with more force. However, a close examination proves that they deliver a less powerful bite.

Given the adverse effects of a Pit bull’s bite, perhaps you should consider running away if it chases you.

However, you will need to run faster than most marathoners if you wish to make a narrow escape. The dogs run at an impressive speed of 45mph (of course, they are hunters).

How do you let go of Pit Bull’s bite?

First advice: Avoid being bitten by a Pit bull at all costs.

However, if that’s not possible, then you will need to break away from the bite before it inflicts more damage.

In the most unlikely event that you can stand the pain and still remain strong, you will have to think fast.

You don’t expect to use a pepper spray, do you? Hitting or kicking the dog is even worse, even if you will have the strength.

Therefore, what is the solution?

If you are bitten, the best solution is to insert a break stick between the teeth.

Of course, this is not a small dog. It is strong and extremely aggressive. Therefore, don’t expect it to just let go without putting up a fight. You will need to be strong to even loosen its bite.

If you can’t access a break stick, you could try using your hands. This is, obviously, not the most appropriate thing to do. You might even lose your hand in the process.

How strong is a pit bull bite compared to a human?

Seriously! You don’t want to compare that. Obviously, a pit bull bite is stronger than a human bite.

Therefore, the dogs have over two times stronger bites than human beings. You don’t want them biting any part of your body because they will leave some huge damage.

As stated earlier, the dogs aren’t the strongest bitters. However, they still bite hard enough to cause some severe damage to their opponent.

How strong are pit bulls compared to humans?

How strong are pit bulls compared to humans? Well, this is a relative question. Of course, these dogs are much stronger and faster than any of us.

Training these dogs requires utmost care, given their strength and agility. However, strength is a relative parameter. For instance, a young Pit bull might be weaker than an adult human.

Again, we have the strongest man on the planet. Placing him against a pit bull to test their strength might yield different results.

However, if we take an average human and an average Pit bull, the dogs are stronger and more powerful.

Can Pit Bulls be used as police dogs?

There are contrasting views concerning the ability of a Pit bull to work as a police dog. I believe they can make good police dogs.

Here is the catch though, they need proper training.

Generally, Pit bulls are known to be more friendly and loyal to their owners.

Rottweiler or Pit bull-which dog is stronger? I hope I have finally put the debate to rest.

In a nutshell, Rottweilers are stronger, but Pit bulls are more tenacious. Sometimes, that little bit of extra willpower makes all the difference in the world.

What do you think? Rottweiler or Pit bull-which dog is stronger? Share your thoughts below.