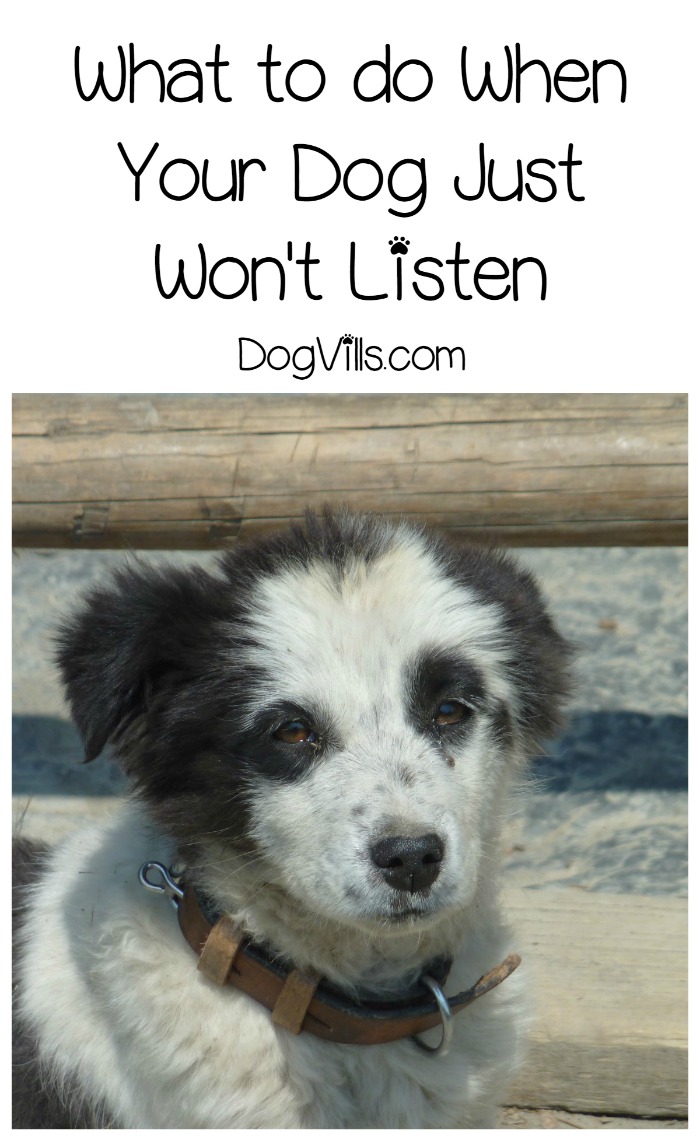 What do you do if your dog won’t listen? That’s a question I often see in the forums. Many people ask this question in regards to what to do to get their dogs to pay attention. However, I recently came across a question from an owner who said he’d done all the research and followed all the tips on getting his dog to listen, but nothing worked. His question was what people can do when their dog doesn’t listen no matter what they’ve tried. With that in mind, I’m going to go over how to keep your dog safe in the event that you just cannot get him to listen – which is very rare, by the way.

What to do When Your Dog Doesn’t Listen

So you’ve taken your dog to all the training classes. You’ve followed all the YouTube videos. You’ve done everything you’re supposed to do, and your dog still doesn’t listen. So now what? First and foremost, I would say to try again. It is exceedingly rare to encounter a dog who doesn’t listen. When a dog doesn’t listen, it’s usually due to a breakdown in training methodology, and it’s often hard to spot. That’s why so many people are amazed when listening to their owners finally clicks with a dog. However, in rare cases, there are some dogs who are just so goofy that they don’t listen. There are also some instances when a dog can’t listen, for example, being deaf. Although even those dogs can be trained to follow hand commands.

If you do have one of those super rare dogs that just will not listen and does his own thing, there are some things you can do to protect him from himself.

Of course, the first item on the list is using a (affiliate link) leash. All dogs should be leashed at all times when they’re not in a fenced in area, but it’s especially true when your dog doesn’t listen to you. A dog who is well trained and listens can be called back if he sees something that he wants to chase or investigate. Not so with a dog who doesn’t listen. It’s important to keep him on-leash at all times to prevent any dangerous situations.

If your dog doesn’t listen, a fence is an excellent option to allow him to run without fear of losing him. A fenced in yard is the perfect solution when your dog doesn’t listen because he can run off his energy without you having to go for a jog, as well. Just remember to always keep the gate secured, and make sure it’s high enough. I recommend a 6-foot privacy fence if you have a larger dog. This prevents him from going crazy because he can’t see outside of the fence, and the height will keep him from jumping over it (as I’ve seen happen).

You should already have done this anyway, but with some dogs, it’s not a necessity. If your dog doesn’t listen, however, it is vital. A dog who doesn’t  listen is a dog who will hork down whatever he finds tasty before you can get to him. While it may be a minor annoyance like grabbing a burger off the counter, it could also be something serious like getting into a chemical. Be sure you keep all hazardous materials well out of reach of your dog.

My biggest piece of advice when your dog doesn’t listen is to keep trying. Go back and reevaluate the training methods you’ve been taught and that you’ve used. Did you do everything exactly as instructed? Have you found your dog’s currency? Is there a tweak you can make to get his training to stick? These are all important questions because a dog that truly doesn’t listen is rare. So keep trying.

Safety First, Then Revisiting Training When Your Dog Doesn’t Listen

Have you ever dealt with a dog who just won’t listen? What did you do? Share below!