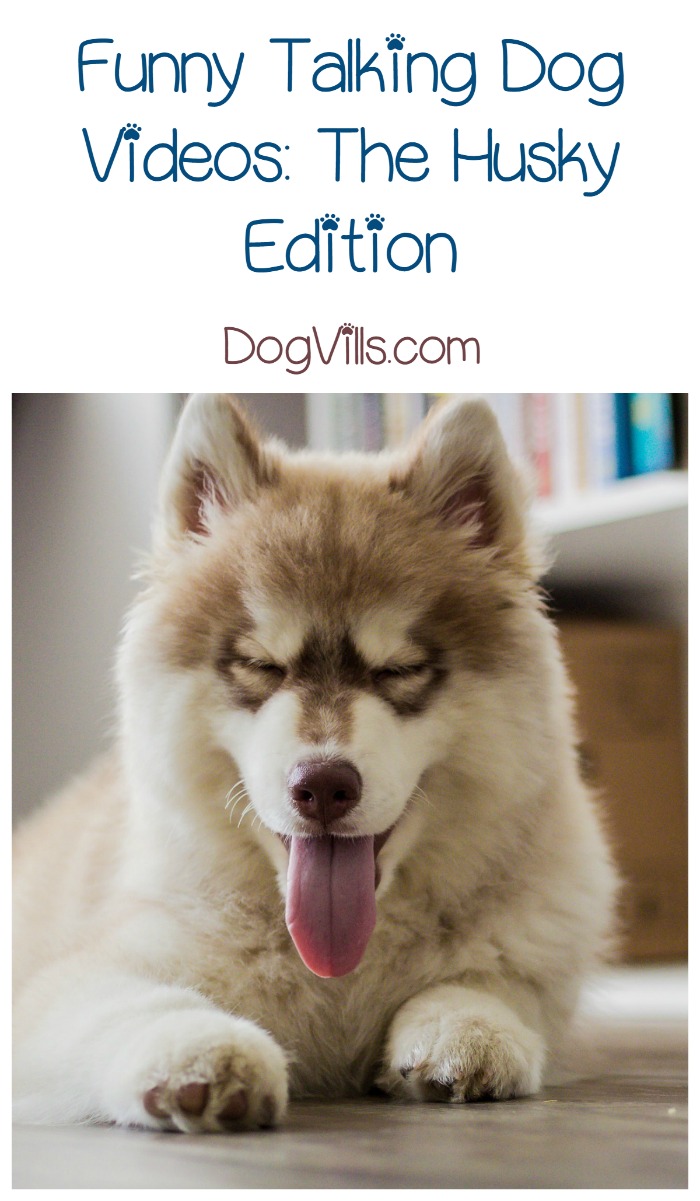 In the world of funny talking dog videos, husky pups reign supreme. Don’t believe me? Search the term on YouTube and see how many results come up featuring the lovable chatter bugs! Huskies are incredibly vocal dogs, easily trained to mimic human words in the most hilariously sweet way imaginable. Check out a few of my favorite talking dog videos featuring the smart husky dog!

Husky dogs are known as a working breed of dogs. They reach an average height of 20-23.5 inches with an average weight of 35-60 pounds and an average lifespan of 12 years. Some husky breed characteristics include being adaptable, affectionate, intelligent, child-friendly and dog-friendly. Here are some funny and cute husky talking dog videos.

Talking Siberian Dog Oakley– The video was posted by YouTube user Gone to the Snow Dogs, is 3:30 in length, published February 20, 2013 and to date has 65,871 views. Oakley is a cute Siberian Husky that says I love you a few times in the video and talks about how much he loves snow.

Remmy Husky Pup Sits and Speaks on Command– This video was posted by YouTube user Mistressdee1, is just 12 seconds long, published January 4, 2012 and to date has 3,564,367 views. Remmy, short for Remmington, is a small pup that sits and speaks on command. When the video was posted, Remmy was just a mere 8 weeks old and weighed only 2.5 pounds. Sadly, he died at the age of 13 weeks old. His owner said that the puppy was abandoned by this mother and they took him in at just 3 weeks old, weighing only 1.1 pounds. The owner stated, “The vet warned us that due to his tiny size for a purebred registered Siberian Husky, his chances were very minimal.”

Husky Sings with Baby– The video was posted by YouTube user Danm923’s Channel, is 2:45 in length, published March 14, 2011 and to date has 11,255,644 views. The video shows a cute little baby named Lexi, who is 10 months old in the video. She starts singing and her favorite pal, Angel the Husky, sings along right with her. The perfect duet!

Talking Husky Dog– This video was posted by YouTube user Kronc27, is 1:30 in length, posted July 21, 2011 and to date has 62,348 views. The dog in the video’s name is Fry, who just wants a cheeseburger but is afraid his owner is going to get one without him.

Two Talking Dogs Argue– The video was posted by YouTube user Gardea23, is 2:07 in length, published July 23, 2011 and to date has 6,902,965 views. This user and his husky dogs are incredibly popular throughout the internet. The two dogs in the video are Huskies named Mishka and Laika. Both dogs even have their own Facebook page: Mishka currently has 1,000,745 likes while Laika currently has 101,673 likes. In this video, Mishka is lounging around and clearly doesn’t want to be bothered. However, Laika has other plans and it isn’t long before the two dogs are in an all-out argument.

Hard to decide which talking husky cracks me up the most! I am a huge fan of Mishka, but all the others are absolutely adorable too, don’t you think?

Have you seen any funny talking dog videos featuring a husky? Share in the comments!