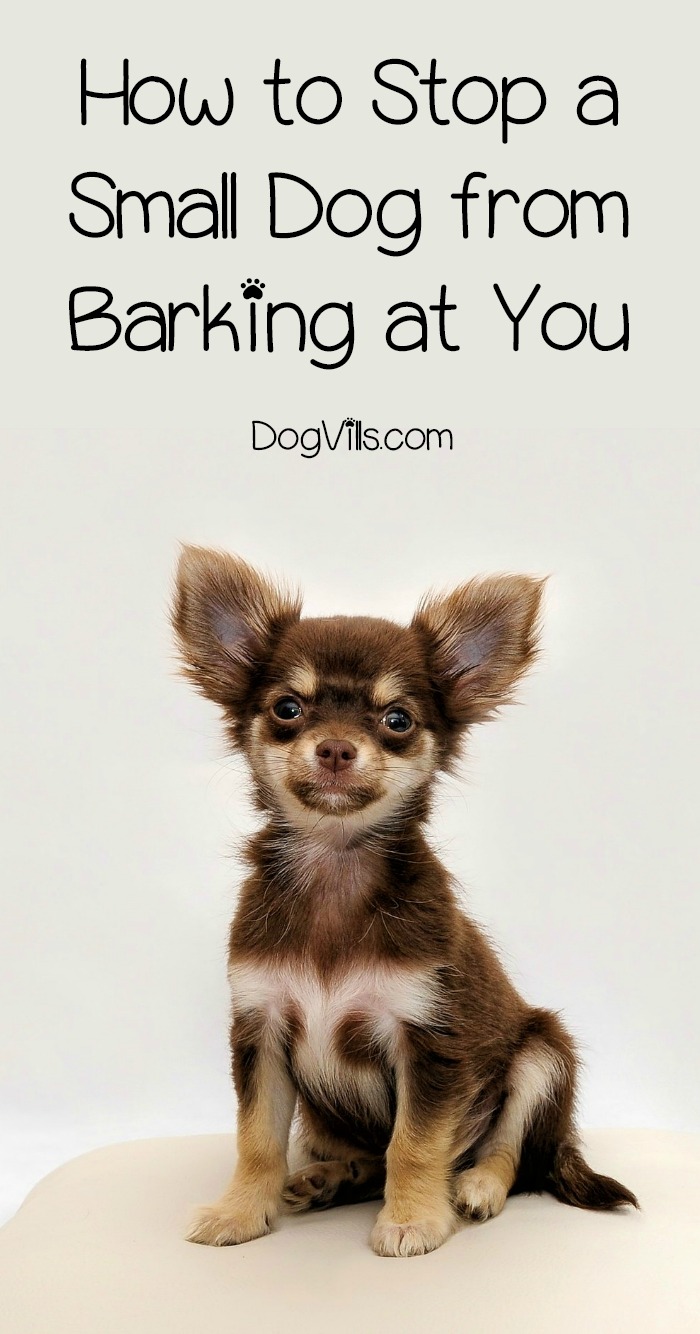 How do you stop a small dog from barking at you?

Here’s a hint: you don’t yell “Stop Barking!” at them!

Read on for more dos and don’ts to stop your tiny pooch from yapping up a huge storm!

Stop barking! We’ve all done it. Our little guys are yapping up a storm, and we just can’t get them to stop. So we give in and try to overpower their barking with a little “barking” of our own. It doesn’t work.

Little dogs are especially yappy. I know it’s a bit of a bone of contention with dog owners as to whether or not small dogs bark more than large dogs, but in my experience, it’s true.

It can wear on your nerves, so lets’s look at how we can get our little guys to stop barking.

How to Stop a Small Dog from Barking at You

The first thing to know is that little dogs are usually quite yappy guys. I’m talking the small breeds like Maltese, Maltipoos, Shih-Tzus, and the like. They just are.

It seems that any little noise sets them off. Even when people who they know come into the room, they can and do bark.

With that in mind, it’s important to be proactive in the quest to limit barking behavior as much as possible.

If you’re getting a puppy, try to expose them to all kinds of sounds and noises as soon as possible.

When you bring your little guy home, knock on doors, ring the doorbell, yell across the house to each other. Make sure they get used to all the normal, everyday household noises that they’ll hear for the rest of their lives.

In addition to that, have friends and family come over more than they normally would. The key is to get your little guy used to noises and people as early as possible so they don’t get into the habit of barking at every little thing.

If you already have a little yapper, there is still hope to get them to stop barking. You can still desensitize them. Do everything I just listed above. They’ll bark at first, but over time, they’ll get used to the sound.

As they become more used to it, reward them with treats when they don’t bark at a noise or a person coming into the house.

Be SURE that you don’t correct them when they do bark. Just ignore it. You want to encourage that non-barking behavior. You don’t want to add any more negative feelings to an already touchy situation for your pooch.

As I just mentioned, rewards play a big part in the training process, but you don’t want to limit the awards to coming from just yourself.

Buy some treats to give to people who frequent your home.

Have them bring a treat with them to give to your dog whenever they come to your home. Eventually, your dog will associate the visits with something good, and the barking will lessen.

Be careful that you don’t inadvertently cause more barking though. They key is for your visitors to give the treats before the dogs bark.

Check out our dog training tips : Is Reward Training Right For Your Dog?

Never yell at your dog to stop barking. Rather, ignore the barking.

Simply ignore the barking until it stops, then whip out a treat and a “good dog” as soon as they stop barking.

The only difference is that you’ll be more likely to have to address the issue with the little guys. If you combine these tips into an overall strategy, you should be able to get your little guy to stop barking – or at least, lessen it – in a relatively short amount of time.

Have you ever trained your pooch to stop barking at you? Share your tips and experiences below!