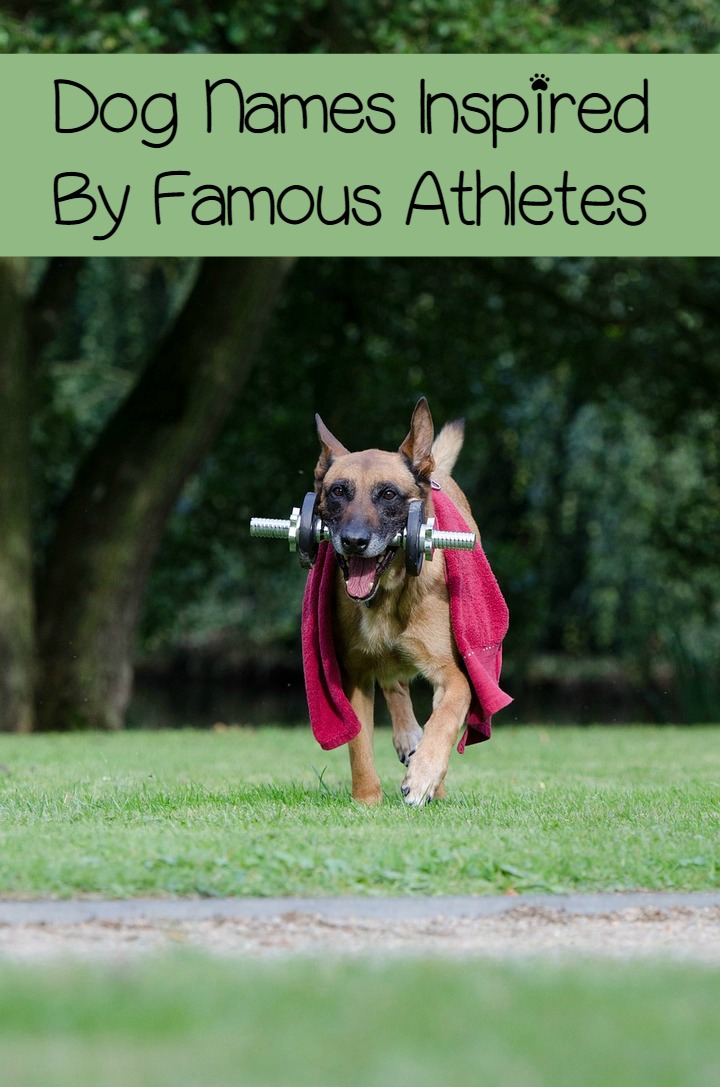 These monikers are absolutely perfect for both athletic types and arm-chair cheerers!

When we’re thinking of names for our dogs, we’re looking for something that fits our personalities as well as what we hope will be theirs.

If you want a sporty dog, give him a sporty name!

Okay, so that’s no guarantee that you won’t get a lazy hound, but hey, you never know!

Check out some of our favorite unique sports inspired dog names!

Agassi is named after Andre Agassi, the retired pro tennis player, who dominated the tennis world in the early part of the 90’s to the middle part of the 2000’s.

Wondering what Agassi named his own dog?

Check out Buster! Cute, isn’t he?

Buster will not be taking any questions. He's focused on what must be accomplished today…his walk!!!

Aikman is named after Troy Aikman, the retired pro football player who played quarterback for the Dallas Cowboys from 1989-2000. Aikman won 3 Super Bowl Championships, 1 Super Bowl MVP and the Walter Payton Man of the Year.

Barkley is named after Charles Barkley, the retired pro basketball player who played the position of Power Forward for the Philadelphia 76’ers from 1984-192, the Phoenix Suns from 1992-1996 and the Houston Rockets from 1996-2000.

His jersey numbers were 34, 32 and 4. To be honest, this probably isn’t the most unique. In fact, there’s a famous Instagram dog with the name! I kind of love him!

Anyone know where I can get a bagel around here? #breakfast #mostimportantmealoftheday

A post shared by SirCharlesBarkley the Frenchie (@barkleysircharles) on Mar 11, 2016 at 7:49am PST

Brady is named after Tom Brady, the pro football quarterback who plays for the New England Patriots. Brady has been with the team since 2000 and has won 4 Super Bowl Championships and 3 Super Bowl MVP’s.

Dale is named after Dale Earnhardt, the late pro NASCAR racing driver who began his racing career in 1975 and died in 2001, while racing at the Daytona 500.

He won 7 championships throughout his career. Of course, he could also be named after Dale Earnhardt Jr.

It was announced today that Derek Jeter will serve as an MLB ambassador for historic showcase in Havana, Cuba on March 22. The former Yankee captain will join Joe Torre, Luis Tiant & Jose Cardenal as special guests of MLB for upcoming Rays game in Cuba #derekjeter #jeter #yankees #re2pect #retirementlife #mlb

LeBron is named after LeBron James, the pro basketball player who played Power Forward for the Cleveland Cavaliers from 2003-2010, the Miami Heat from 2010-2014 and again for the Cavaliers since 2014.

He’s already got shoes named after him, why not a dog. It’s kind of a pun, if you really think about it! (Because we call our feet dogs, feet go in shoes…alright, fine! I haven’t had much coffee yet, give me a break!)

These are just a few of our favorite sports inspired dog names. You don’t have to name your dog directly after your favorite athlete though. Say you really love Tiger Woods, but the idea of naming your dog Tiger seems too trite.

You can look to his sport for inspiration. I’m not going to pretend to know a whole lot about golf, but Birdie is a cute name for a girl dog!

Not sold on the sports-inspired dog names? No worries, we have plenty of other ideas! Check out our favorite TV Sitcom names for girl dogs, or the most popular names for male dogs!

Did you go with different sports inspired dog names for your pooch? Share your favorites in the comments!