Sibling rivalry in dogs can be quite troublesome – to owners. I can’t tell you how many owners came into the vet asking us about how to stop their dogs from fighting. The thing to remember in cases of sibling rivalry in dogs is that it’s actually not a dog problem. It’s an owner problem. We have to learn to disengage our human brains from this dog brain equation.

Sibling Rivalry in Dogs is Natural

Our dogs may be adorable. They may come in all shapes and sizes. We may dye their fur or give them hair cuts with little balls on their tails or bows in their hair. But for all of that, our dogs are still descended from wolves, and they still have some major instincts left over from their days as roving hunters of the land.

Sibling rivalry is one of them. And let’s be clear. I’m calling it sibling rivalry because we consider our pets to be part of the family. However, it’s really pack mentality, and it’s perfectly natural. In a pack situation, there will always be one alpha. That alpha sets the tone for everything. He’s basically the boss. He calls the shots and gets first dibs on everything. He essentially rules the roost. And that’s fine. The other dog or dogs in the house don’t care because that’s the way a pack works. The problem comes in when we humans try to disturb that because we feel like it’s “mean” or “unfair.”

Dogs are not People

It’s so important to remember that. Dogs are NOT people. And further, they are also not children. I like to think of my dogs in the terms of Dr. Allen Grant from Jurassic Park. His famous line is one that all dog owners should remember – “They just do what they do.” It’s not mean when your alpha dog pushes your other dog out of the way to greet you or get at a toy. It’s just the way pack mentality works. 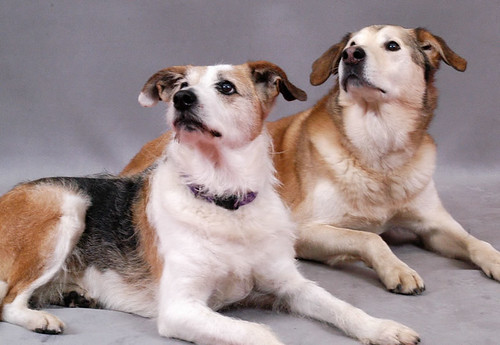 We have to remember that dogs do not think like people think. To their dog brain, alpha behavior is perfectly fine. That’s the way it’s supposed to be. BUT… to a human brain, the alpha dog is being mean. So what happens? We try to approach the situation as a human would. We chastise the alpha dog, and give extra attention to the submissive dog, and then… BOOM! A brawl breaks out. It was totally avoidable and totally owner-induced.

How to Deal with Sibling Rivalry

The best way to deal with sibling rivalry is to deal with how you as the owner handle it. In fact it’s the only way. Owners have to realize that dogs are dogs. They think like dogs. We can’t make them think or behave like people, no matter how much a part of the family they are. So to deal with sibling rivalry, the best thing to do is nothing. If you stop trying to make your dog “be nice” and “share”, you’ll find that the fights almost immediately stop and your dogs are much happier.

Give it a try. It will be hard, I know. I had to learn this, too. However, once you see everything in the house calm down and everything gets nice and peaceful, you’ll find that the “meanness” of your alpha dog no longer bothers you. 😉

Have you ever dealt with sibling rivalry in dogs? What did you do to keep the peace in your animal kingdom? Share below!