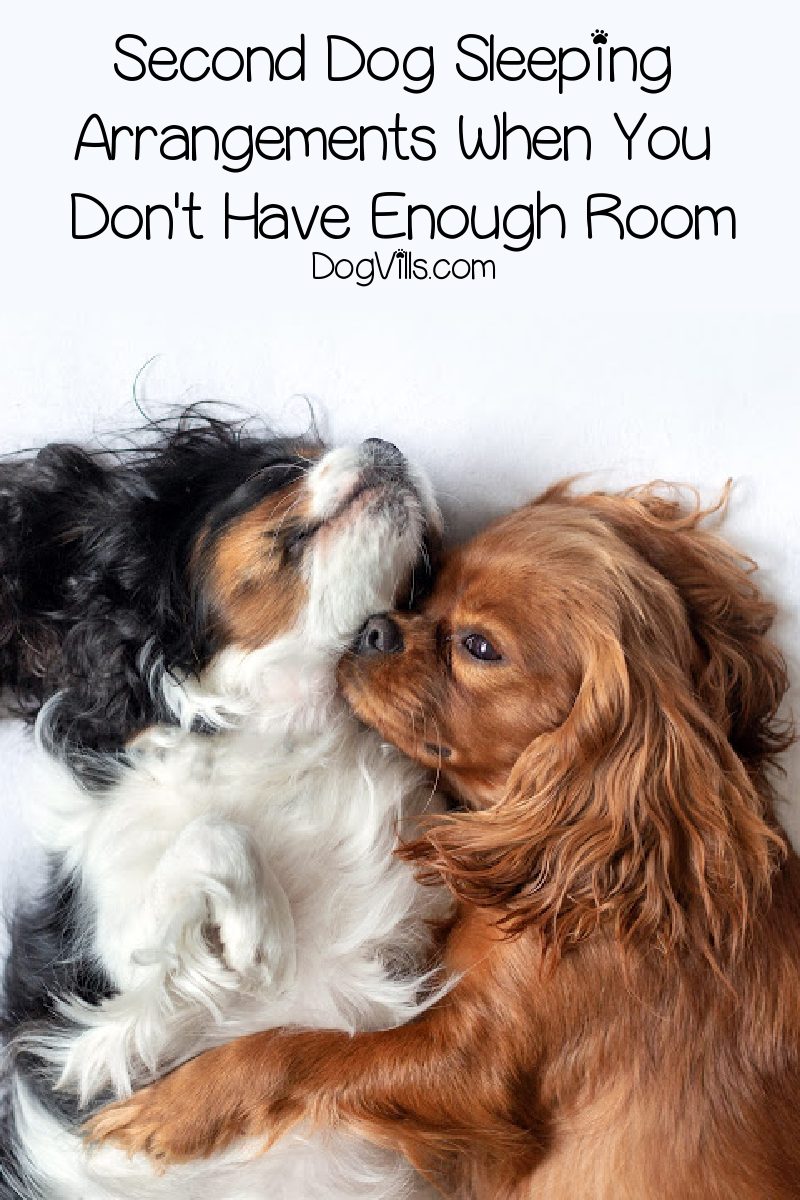 Second dog sleeping arrangements are something you might not initially think of when you’re considering getting a new dog or puppy.

While new owners often think of things like feeding issues, sharing toys, slow introductions, and the like, the night seems to be overlooked.

It makes sense; after all, we’re sleeping, why would we think of it?

However, figuring out your second dog sleeping arrangements, especially if you don’t have a lot of room in your home, is a key factor in ensuring a peaceful transition from one dog to two.

Let’s explore your options, shall we? 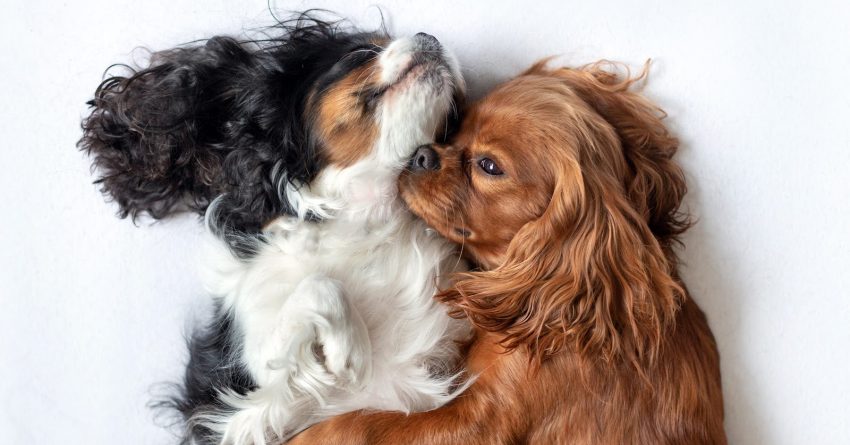 If you have a ton of room and a huge budget, sleeping arrangements for a new puppy and older dog isn’t an issue.

All you need to do is get two beds and place them on different sides of the room.

However, if space, finances, or both are limited, it can be a little more of a challenge to create an ideal sleeping arrangement for the two pooches.

So first, let’s talk about second dog sleeping arrangements when the new dog is a puppy.

There are a few things to remember here.

Puppies and older dogs tend to have a relationship like that of a loving younger and older sibling dynamic.

The puppy is full of energy, following the older dog around constantly and always trying to get him to play.

Meanwhile, the older dog (the older sibling in this case) usually puts up with it but wants to get away sometimes.

On the other side of that coin is the amount of sleep a puppy need versus an adult dog.

Unless your current dog is up there in years, your puppy will need more sleep than your older dog.

That means you need a space for your puppy to be able to snooze without cramping your adult dog’s style.

With both of these examples, you can see that it’s a good thing to have separate sleeping areas for your two dogs – at least until they decide they don’t want them anymore.

Some dogs become fast-friends and you’ll immediately find them snoozing way together in one bed or on your bed.

However, some dogs like to have their space. So what can you do if you don’t have a ton of room in your home?

If your current dog sleeps in the bed, don’t kick him out in an effort to keep things fair with the new puppy.

Remember, your new puppy has to fit into your current dog’s life, not the other way around.

Watch your older dog for his reaction to the puppy.

During the initial introductions be aware of how receptive the older dog is to playful advances, close proximity, and the like.

If the dogs are getting along well, you might not need to do anything other than make space in your bed for a second pup if possible.

If, however, your dog is obviously seeking a reprieve from the puppy’s constant attention find a way to give that to him.

Remember that the new puppy is a huge change in his life, and the best way to ensure an easy transition is to give your older guy what he needs.

Baby gates are an excellent way to give your older dog space if he requires it.

When goes to the room where he prefers to nap, simply put up a baby gate at the door to keep the puppy out of the room and allow your older guy to sleep or simply take a break.

Second dog sleeping arrangements can sometimes take a little getting used to for your older dog, so give him lots of treats to reinforce how great it is to have a new dog in the home.

If he’s laying in his bed, and he allows the new puppy to lay next to him, give him a treat.

If he shares an object with the puppy, give him a treat.

The idea is that every time he shows a willingness to interact and share living arrangements, reinforce the behavior with a reward.

Even if you don’t have a lot of room in your home, you should still be able to place two separate beds in the same room, even if they’re just side by side.

Although your puppy might sack out more or your older dog might want to get away for some “me time,” separate beds are generally enough to create a sort of instant boundary.

Of course, this only works if the dogs get along, but that’s an entirely different post.

A Bed for Two

If both the puppy and the older dog are getting along swimmingly, you can try a dog bed made for two.

These extra large dog beds have plenty of space to accommodate to best buddies that have taken well to each other.

Second Dog Sleeping Arrangements for a Dog and Older Dog 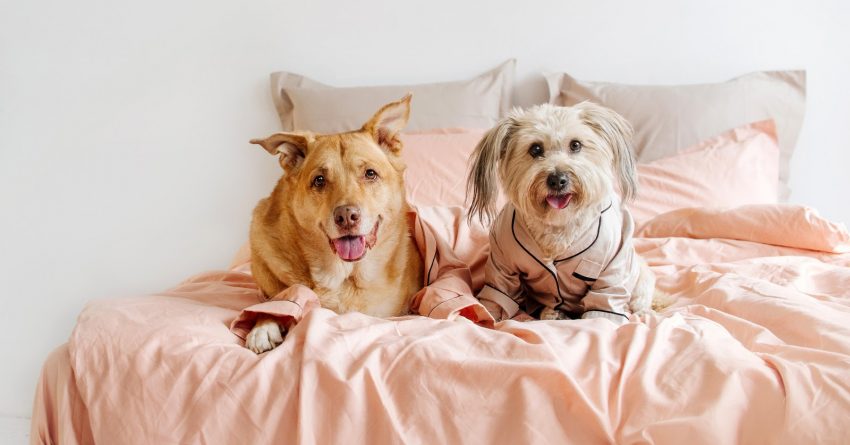 Second dog sleeping arrangements aren’t always between a puppy and an adult dog.

In this instance, most of the above tips apply, but there is a new component to consider: the new dog’s size.

That means that they may be annoying, but it’s hard for them to be outright threatening.

Another adult dog, however, can literally throw his weight around.

While your current dog is probably a friendly guy – otherwise you wouldn’t be adopting another – it’s important not to take that for granted.

Remember, you’re bringing a new dog into his space.

With that in mind, the above tips for puppy and adult dog sleeping arrangements apply here, but there are a few others to add, as well.

Dogs might not understand what we call rules, but they do understand repetition.

It’s important to establish what is and isn’t acceptable early on for your new dog.

This is important for any dog you’re bringing into the home, but it’s even more important for an adult dog who will be trying to figure out his place in this new environment.

Establish your routine early and stick to it.

This will help your new dog understand is new place in the home and help him adapt to his new living arrangements.

Closely related to following your dog’s lead is respecting his boundaries.

If he obviously doesn’t want to be around the other dog at any given time, allow him that space.

Again, baby gates are great for this, creating instant separation.

Sometimes, it might take a while for your current dog to get used to the new guy, especially when the new dog is an adult.

With the addition of an adult dog, new dog sleeping arrangements can be made in separate rooms.

This ensures that the two dogs won’t be competing for space or attention when it’s time to sleep.

Nothing promotes bonding like outdoor time. The backyard is a perfect place to help your current dog and your new dog bond.

Take them out often to run and romp.

Another bonus is that all that activity will tire them out making it more likely that they’ll easily accept their new sleeping arrangement.

A tired dog will sack out wherever, so lead your new dog to his area after a hard play session.

He’ll get the idea that the spot is his. 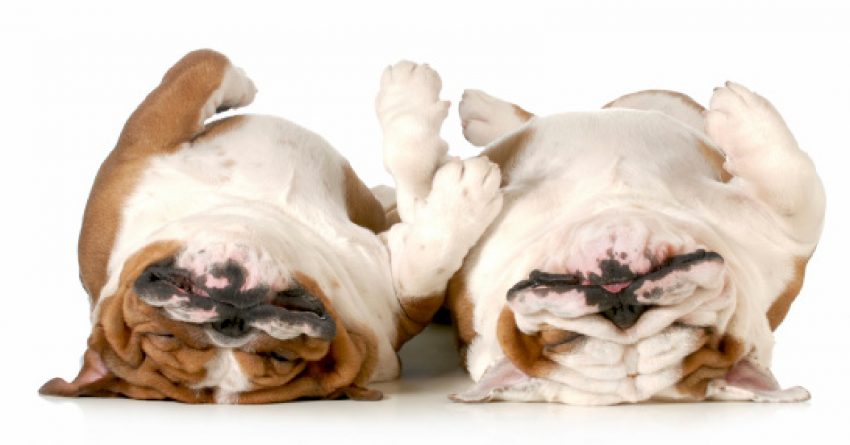 Of course, we can’t guarantee that you’ll have no problems at all with your new addition to the home.

That being said, the above tips will help you make whatever bumps you do encounter along the way smaller and more manageable.

Whether you have a new puppy or are bringing home an adult dog, these tips for second dog sleeping arrangements can help you make it as stress-free as possible.

What are your thoughts on second dog sleeping arrangements? Did you do something different? Share below!