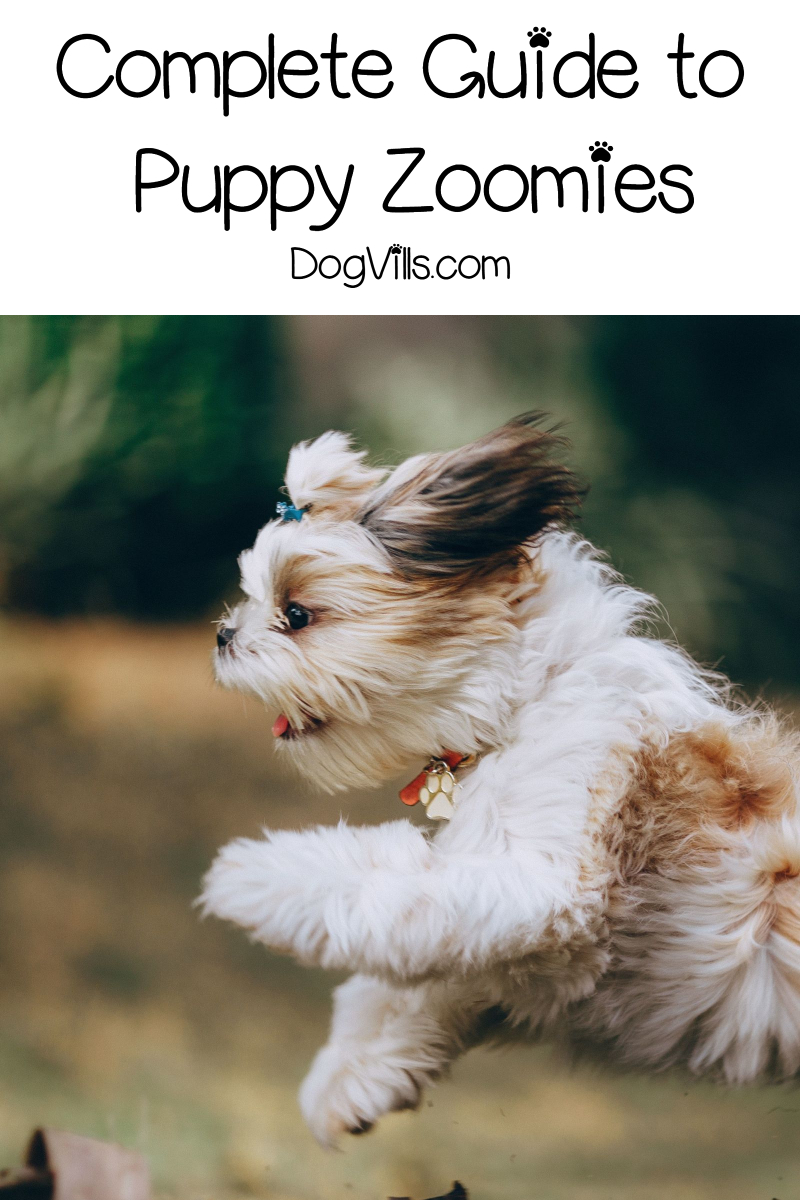 We see them all the time, especially on social media.

As much as we love them, though, sometimes we want to know how to stop them!

After all, a dog racing through the house at high speed can be dangerous, at least to our expensive stuff!

Read on to learn all about this behavior and how to stop it.

You may also love: How Much Attention Do Puppies Need a Day?

Puppy zoomies have become one of the most popular videos on all of social media for dog lovers.

There’s nothing more adorable than watching a pooch zip around the house or the yard at top speed.

I have fielded such questions at the vet as “are zoomies safe?” and “can zoomies hurt my dog?”

And of course, everyone always wants to know what causes puppy zoomies.

Today, we’re going to talk about the zoomies, what causes them, and what – if anything – can or should be done about them.

What are Puppy Zoomies

If he suddenly starts making laps around the house, there’s absolutely nothing wrong. He’s just being a dog.

For some owners, that’s explanation enough, but for inquiring minds, let’s really dig into what the zoomies actually are.

Puppy zoomies are a natural way for your dog to work off excess energy.

The zoomies can be caused by several factors, all of which are totally normal.

Except in the case of baths, which I’ll get to a little later, you’ll almost always see signs of impending zoomies if you know what you’re looking for.

Lots of jumping up and down, rapid tail wagging, and bowing to you or another dog are all signs that zoomies could be just over the horizon.

If you’ve read any of my other posts, it might surprise you to learn that there will be no need for a section on all the possible dire reasons that your puppy does this.

So let’s talk some more about one of the cutest things any dog can ever do.

As I said, puppy zoomies are a perfectly natural thing for your little guy to do.

Sometimes, even older dogs get the zoomies, too.

It’s nothing more than your dog releasing excess energy due to a couple of different things.

Sometimes, your puppy will get so excited, he doesn’t know what to do with all of that energy.

This usually occurs when your puppy meets a new person or animal.

For many puppies, meeting new people or animals can get them so excited that they are filled with an overwhelming amount of energy.

That energy needs an outlet, and that outlet is usually a big, fat case of puppy zoomies.

These zoomies allow your puppy to rapidly get rid of all that pent-up energy that the new exciting person or animal has caused.

Closely related to excitement as a cause for zoomies is stress.

This is why you’ll often see dogs and puppies bolt after they’re all finished with bath time.

Cats have a reputation for hating water, but let’s be honest, most dogs don’t love it any better.

They’re just not so pushy about it. LOL.

So what happens to a dog who hates baths while he’s being bathed? Well, he experiences stress. He’s not happy about his situation.

After bathtime, he has to do something with all that pent-up stress. Again, that’s where zoomies come in.

A healthy dose of running laps gets out all that stress, allowing him to reset, as it were, and get back to his super hard life of laying next to you while you watch television.

This is the only somewhat negative cause of the zoomies in both puppies and older dogs.

Without the proper amount of exercise, either through walks or jogging or a nice game of fetch in the yard, your dog will end up with a surplus of energy.

If your dog hasn’t had enough exercise in a day, all that energy builds up.

Although chew toys are a great way for dogs to relieve a certain amount of energy, they can’t take the place of physical activity.

That’s when you’ll see your puppy or dog get a healthy case of the zoomies, darting around the house or the backyard in an effort to work off all that energy.

Puppy zoomies are also a way for puppies to stretch their legs both literally and figuratively.

As puppies grow and mature into dogs, their capacity for physical activity increases.

As it does, your puppy will naturally want to test the limits of his physical prowess.

Zoomies can be his way of seeing just what he can do with that growing body of his.

Funnily enough, peer pressure can be a cause of zoomies in older dogs.

You may have seen videos on Instagram or Facebook of fully grown dogs going from docile on the floor to running at break-neck speed through the house after a puppy has zipped by.

That zippy little puppy can activate an older dog’s desire to run around like crazy just like he did when he was a puppy.

After all, he wants in on that action.

What to do About Puppy Zoomies

Some people love watching zoomies and some just want it to stop.

There’s really no wrong answer here. While the zoomies are a natural behavior, in some cases, you don’t want your dog running around at full tilt.

For example, someone with an apartment or small home might not want their Golden Retriever darting through the house at top speed.

That’s an invitation for breaking almost anything he comes into contact with.

In addition, your dog may have an injury that requires him to be less active, which can be hard on both him and you.

After all, no dog wants to lay around, and the last thing you want your dog or puppy to do is open up stitches or make an energy worse by taking off like a rocket.

Finally, large and giant breed dogs can be downright dangerous when they get the zoomies.

You don’t want a 150 pound English Mastiff plowing into your kneecap or into a small child, bowling them over.

So if you have a situation where zoomies are not a great thing, here are some things you can do.

This rule is most important for puppy owners.

Adult dogs who’ve been well-trained almost know without asking when they can and can’t let the zoomy floodgates open, however puppies, don’t.

The worst thing you can do with puppy zoomies is chasing your zippy puppy.

This can reinforce a behavior that you don’t want happening while on walks or when guests come over.

Rather than chase your puppy, ignore his frenetic running, call his name loudly or making a loud noise to snap him out of it. Don’t scare him though.

After you get his attention, give him positive reinforcement that shows him that stopping his light speed running will be rewarded.

Proper training is key for any dog in any situation. One of the best things to start with is training your puppy to look to you for direction.

You want your puppy to immediately look to you when called. This helps you avoid trouble before it starts.

A properly trained dog will stop his behavior and look to you when called, which can stop him from running into the street or toward another dog that does not look like he’s in the mood to play.

Seriously, though, puppies grow out of the zoomy phase.

As dogs get older, they naturally have less energy and are less apt to have the zoomies.

By the time your dog is all grown up, the zoomies will be few and far between. Usually. After all, some high-energy dogs are zoomers for life.

Unlike other posts, I’m going to close without an admonition to head to your vet if you see puppy zoomies – and you will.

The only dangerous thing about them is your puppy running into a table leg.

So if your puppy breaks out into the zoomies, don’t worry. He’s just working off some energy.

If you want to nip puppy zoomies in the bud, there are ways to work on that, too. In either case, they’re simply nothing to be concerned over.

How do you feel about puppy zoomies? Share your thoughts below!