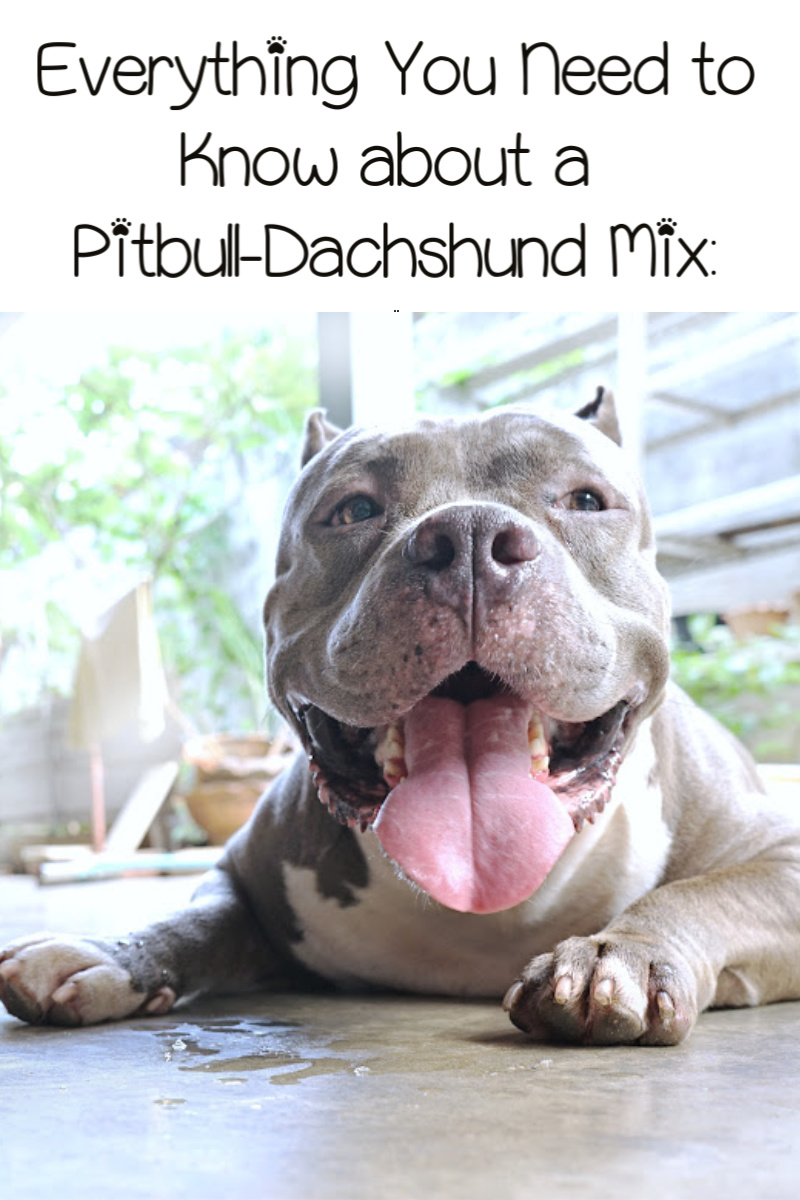 Have you ever heard about a Pitbull mixed with a Dachshund?

It’s one of the most unique mixed dog breeds you’ve ever seen.

So, if you want to learn more about the Pitbull-Dachshund mix or Bulldach, you should keep on reading.

We’ll go over all considerations, including potential health problems, below.

While people have been crossing dogs from different breeds for a while, a Pitbull-Dachshund mix is quite rare.

Probably, not many breeders are working actively on breeding these particular dogs.

The first recorded appearance of a Pitbull mixed with a Dachshund is in 2015 when an owner found a strange-looking dog in his yard.

Rami, as they called the dog, was probably an accidental offspring from a Pitbull and Dachshund.

In other words, it wasn’t deliberate breeding, unlike other designer breeds.

As you can imagine, Rami quickly gained popularity after the Human Society tried to find him a home online.

People were amazed by Rami’s unique appearance, and his video reached over 2 million hits.

The thing about mixed dogs is that you can’t predict very accurately how they would look like.

That’s because they tend to combine features for both breeds in a unique way.

Most Pitbull-Dachshund dogs have the sturdy and muscular body of their Pitbull parent.

However, they’re more elongated than the average Pitbull and might have short legs, thanks to their Dachshund’s genes.

Depending on the dominant genes, some Bulldach might have a Pitbull’s face, but with a slightly longer nose than usual and long ears.

Others might have a face that resembles a Dachshund with subtle Pitbull features.

Since both Pitbulls and Dachshunds have a short coat, the Bulldach’s fur is short and coarse.

The color might vary, but brindle, black, and brown are typical. Some Bulldach dogs also have a white patch on the chest.

Pitbulls and Dachshunds vary in their size. Pitbulls are large dogs with a weight of 30 – 85 pounds, while Dachshunds rarely go over 32 pounds.

As such, Bulldach dogs will probably be a medium-sized dog, weighing around 25 pounds.

Nevertheless, no one can guarantee you how a Bulldog puppy will look like until they grow up.

That’s not a bad thing if you love surprises.

The temperament of the Bulldach depends a lot on the personality of the parents.

So, let’s see more about the temperament of the Pitbull and the Dachshund.

Pitbulls have quite a bad reputation among the general public for being vicious and aggressive.

The truth is that Pits love nothing more than to cuddle and be around people.

Most don’t know how big they are and try to climb into your lap whenever possible.

Furthermore, Pitbulls are one of the most sensitive dog breeds and don’t make good watchdogs because they’re eager to meet strangers.

They’re very good with children but tend to be aggressive around other dogs.

But with proper socialization and training, you can’t hope for a better companion dog than a Pitbull.

The Dachshund, on the other hand, is naturally suspicious of strangers and tends to bond to a single person.

Dachshunds can become jealous of their owners and snappy if you don’t socialize them properly.

They’re playful and lively, but they’re also one of the naughtiest dogs.

While Dachshunds might look comically, their bodies are made to dig and maneuver in tunnels to hunt badgers.

They can be fierce, strong-minded, and persistent when it comes to begging for treats or attention.

Moreover, Dachshunds are very intelligent and have a mind of their own.

So, what do you get when you combine these two incredible dogs?

The Bulldach is affectionate, loyal, and feisty.

These unique dogs aren’t violent but won’t hesitate to protect themselves or their families.

They’re good with children and other dogs if properly socialized.

Since both Dachshunds and Pitbulls are intelligent, the Bulldach is a smart dog with the stubbornness of the Dachshund and the affectionate nature of a Pitbull.

As such, they make excellent family dogs, especially for families with older children.

As I already mentioned, Pitbulls learn tricks with ease and are eager to please their owners.

The Dachshunds, on the other hand, tend to be stubborn and can be hard to train and housebreak.

But you can motive them with food as long as you’re careful not to overfeed them.

So, while the Bulldach is highly intelligent and able to learn tricks, they might be stubborn and play deaf during training sessions.

As such, they require early socialization and a lot of positive reinforcement.

Neither Pitbulls nor Dachshunds react well to harsh treatment, so you’ll have to use a lot of praises and rewards to encourage good behavior in your Bulldach.

Be positive and patient.

Let’s talk about the exercise needs of a Pitbull mixed with a Dachshund.

Pitbulls are energetic dogs that require at least an hour of exercise a day.

Dachshunds are slightly less active and don’t need more than 20-30 minutes of exercise.

They love to run and will do fine with one long walk a day. However, they can become destructive and mischievous when bored.

Keep in mind that Dachshunds have a high potential for weight gain.

So, you have to provide an adequate amount of exercise to your Bulldach and provide toys to stimulate them mentally and physically.

Moreover, you have to keep them on the leash during walks.

Pitbulls can be aggressive to other dogs, while Dachshunds have a high prey drive.

Let a Bulldach off the lead, and they can run away, chasing a pigeon or picking a fight.

As for grooming, the short coat of the Bulldach requires brushing two-three times a week and an occasional bath to keep them clean and fresh-smelling.

They don’t shed much, but they’re not hypoallergenic dogs.

Besides brushing, you’ll have to check their ears weekly and clean them once a week.

Long ears are prone to infections so that any foul smell might indicate an ear infection.

While Pitbulls and Dachshunds are generally healthy dogs, they are predisposed to certain conditions.

As such, you have to know what the possible health problems of Pitbull-Dachshund mix are:

While a Dachshund-Pitbull mix might have health problems, they can live about 8-12 years.

But since they’re a rare breed, there’s still much we don’t know about them and their possible genetic diseases.

If you’ve fallen in love with the Pitbull-Dachshund mix, keep in mind that puppies are hard to find.

As I already mentioned, not many breeders are working on this mix. As such, Bulldach puppies might cost a fortune.