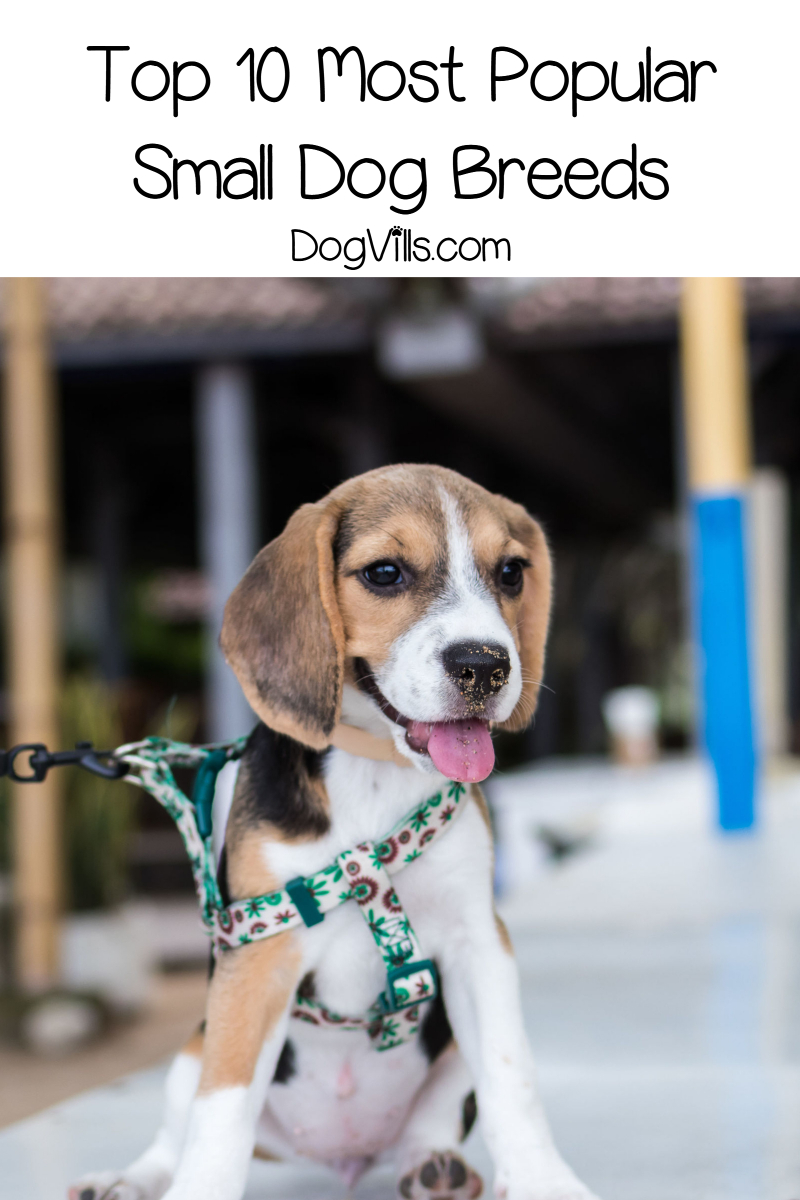 What are the most popular small dog breeds?

Are Poodles more popular than Beagles?

Where do Frenchies fall on the charts?

Have you ever asked yourself such a questions?

Then keep on reading because we’re going to talk about small breeds that always top the popularity charts!

Everybody knows that Labrador Retrievers, Golden Retrievers, and German Shepherds are one of the most popular dogs in the USA.

But what about their smaller brethren?

To compose this list, I used the American Kennel Club’s list of the most popular dog breeds for 2018, which they released in March 2019.

As strange as it sounds to some of you, the French Bulldog takes fourth place in the AKC’s list of most popular dogs.

Consequently, he is the most popular small dog breed, at least for the moment.

They don’t do well alone in a backyard because they like to be the center of attention and take part in your daily activities.

What makes French Bulldogs so popular is not only their charming and mischievous personality but also the fact that they don’t need much exercise.

They also don’t need a lot of space to be comfortable and happy.

French Bulldogs are one of the calmest dog breeds you’ll find. They don’t bark without a good reason and are unlikely to disturb the neighbors.

So, they are excellent dogs for working people as long as you make up for your absence.

The Beagle’s intensive brown eyes and pleading face in combination with its friendly disposition are probably what makes it such a popular breed.

Bred to hunt small prey such as rabbits and hare, the Beagle is a scent hound.

He likes nothing more than to follow an interesting smell and discover what’s at the other end.

But when he is not tracking a scent, Beagles are happy to be around their owners and shower them with love and devotion.

They are so cute that they can’t intimidate even people scared of dogs and get on well with everybody.

Moreover, Beagles adapt well to apartment living as long as you provide plenty of walks during the day.

These cuties also have three distinctive barks that they are not shy to use and enough energy to keep up with hyperactive children.

It’s no surprise that Poodles are still a popular breed. These dogs exhibit an air of aristocracy and are so elegant and fluffy that a few can resist their unique look.

In addition to this, Poodles are highly trainable and very intelligent. That’s why they excel in obedience and agility courses.

Despite his regal appearance, this dog is not a snob and loves to engage in play and mischief. He is devoted to his owner and makes an excellent companion for older kids.

What also contributes to the Poodle’s popularity is that it comes in three sizes, which are considered the same breed.

On the one hand, we have the toy poodle, who weighs as much as a large cat, and on the other, the Standard Poodle with his 50-60 pounds of fur. In the middle, the Miniature Poodle stands with his 11-15 inches of height and 15-17 pounds.

No matter the size, all Poodles adapt well to apartments and houses alike as long as they are close to their humans.

The amazing coat, fierce personality, and undying loyalty explain why Yorkshire Terriers are still among the most popular small dog breeds.

A big dog living in the body of a small one is how most of his owners would describe him.

With an average weight of six pounds, he is one of the smallest dog breeds.

However, the Yorkie’s size doesn’t stop him from being courageous and bold.

This small dog can be aggressive to other dogs and won’t hesitate to pick a fight with a much larger dog.

That’s why early socialization and obedience training is a must.

Being companion dogs, Yorkies thrive when somebody is fussing over them and love to follow their human around the house.

They can even become jealous of new additions to the household and attempt to chase them off.

However, Yorkshire Terriers get on well with cats and other pets if they have been raised together.

Since they are so delicate and small, dog specialists don’t recommend them for homes with toddlers.

Look at these cute Dachshunds! Do you need more of an explanation of why these dogs are among the most popular small dog breeds?

Dachshunds used to be badger hunters and retain some of their hunting personality.

For one, we have their digging instinct which they might redirect to the nearest plant.

And when they want something, they could be as persistent as when tracking prey.

Still, Dachshunds are cheerful and loving companions who love to cuddle and can entertain you for hours.

They are also small calm dogs and adapt well to apartments.

In addition to this, they don’t require as much care as other dogs. However, they can be quite stubborn and have a loud bark.

Famous for being the favorite dog breed of Queen Elizabeth II, the Pembroke Welsh Corgi finds its way into the list of most popular dogs.

Since Corgis used to be working dogs, they have a mind of their own. So, don’t expect complete obedience from this fellow because he can be stubborn at time.

But they are highly affectionate and eager to please. In addition to this, Corgis are easy to motivate with food which can come in handy during training.

But owners beware! Corgis love to eat and will never say “no” to treats.

As such, they can become obese if you aren’t careful how much you feed your Corgi.

Among the many cute dog breeds, the Cavalier King Charles Spaniel hold a special place with its long ears, expressive face, and deep black eyes.

One of the reasons for his popularity is the Cavalier’s eagerness to welcome everybody with a wagging tail.

Not to mention that they love belly rubs and napping in their owners’ laps.

In his arsenal, the sweet expression of the Cavalier King Charles Spaniel is his biggest weapon.

He won’t hesitate to use it to get more treats or demand attention even when you’re working.

You’ll have to work on your ability to say firmly “no.” Otherwise, you’ll be in a lot of trouble with this guy.

But they are perfect if you’re looking for a small calm dog to keep you company on the couch.

If you want a dog that will make life interesting, you need a Miniature Schnauzer.

In a small body, the Miniature Schnauzer packs a big personality, intelligence, playfulness, and humor.

Described as a “people person,” the Miniature Schnauzer is deeply loyal to his owners and won’t leave your side no matter what.

This dog wants to be petted and adored and will demand your attention often.

The Miniature Schnauzer gets on well with children but might be aloof of strangers until you let him know they are welcomed.

He is also capable of picking fights with much larger dogs despite his small size.

Another adorable small dog that makes the list of most popular small breeds is Shih Tzu.

Long, silky coat, a face that melts the heart, and a charming personality explain why people are in love with this dog.

Even people who don’t like dogs can be smitten by their friendly personality and unwillingness to be ignored or denied the attention they want.

Since Shih Tzus can adapt to apartments or houses as long as they are with their owner, they are suitable for anyone who wants an affectionate dog.

However, if you leave them without human contact for long, they will be miserable.

Since they are among one of the smallest dog breeds, Shih Tzu should be handled carefully.

The 10th most popular small dog is the Boston Terrier, a position he earns with his tuxedo-like coat and adorable eyes that say “I love you.”

Even though Boston Terrier used to be fighting dogs, they are so incredibly friendly and charming that you’ll never be able to guess it.

These dogs are capable of amusing even the stoutest audience with their unique facial expressions.

Suitable as companion dogs, Boston Terriers do well in apartments and don’t need a lot of exercise to keep them happy.

Usually, a walk with you to the park is enough to keep him in shape.

Which are the smallest dogs in the world?

Since we’ve been talking so much about tiny dog breed, I think it will be interesting for you to learn which the smallest dogs are. Here are they:

“But what about those tiny dogs I’ve seen fitting in a cup?” you ask.

Teacup dogs are those who are smaller than the average standard for the breed. In other words, they are the runt of the litter.

As such, they often struggle to survive. When these dogs are bred, their offspring are smaller than usual and often have a myriad of health problems.

Teacup dogs are not recognized as a separate breed. That’s why you won’t find them in the AKC’s list of popular dog breeds.

What do you think about these 10 popular small dog breeds? Which one is your favorite? Share your thoughts with us in the comments.