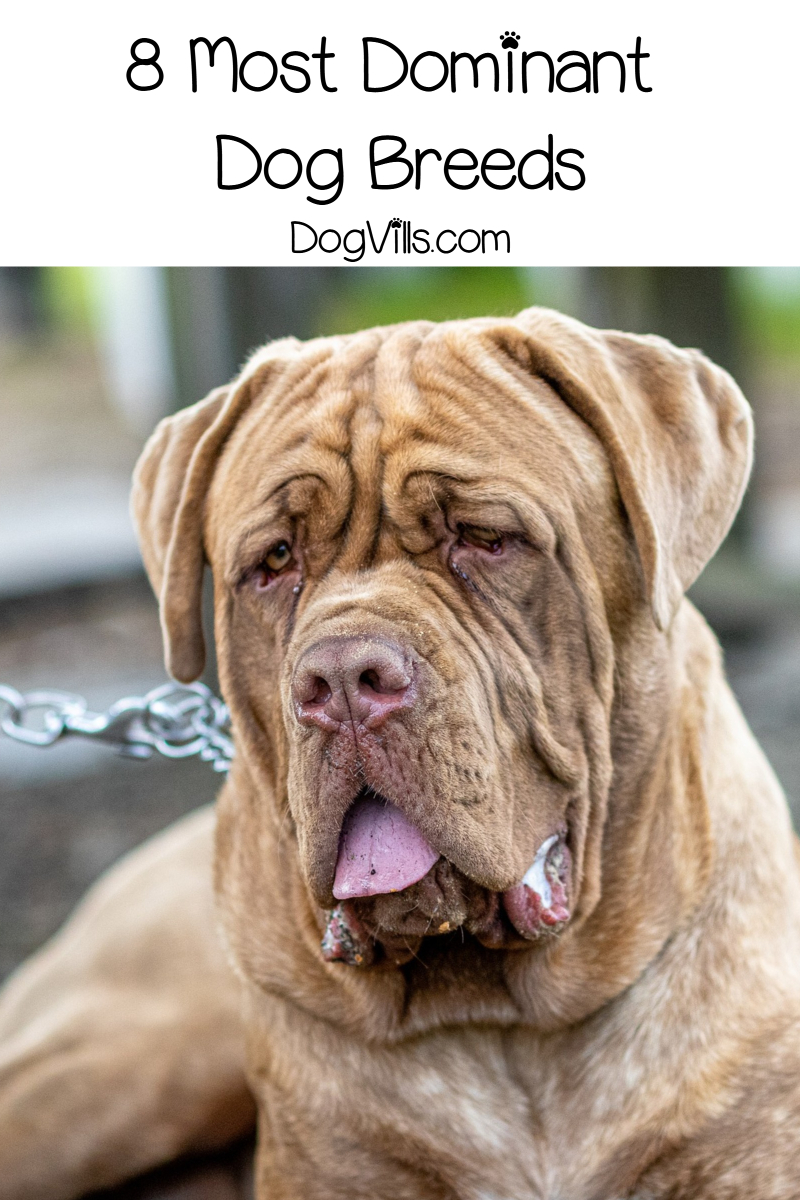 Have you ever thought about the most dominant dog breeds?

You should because these breeds typically aren’t the best dogs for first-time owners.

So, today we’re going to take a look at 8 dog breeds that tend to be bossy and domineering.

Usually, you can tell how dominant or submissive your pooch is by observing their interaction with different dogs and animals.

While most breeds fall somewhere between dominant and submissive, a few tend to fall squarely on one side or the other.

So, for this list of the most dominant dog breeds, I’ve select dogs with an independent spirit and a protective streak.

These alpha dog breeds take their roles seriously and will never back off a fight.

The moment you see the muscular and intimidating Boerboel, you know that you have a dog that will make an excellent guard dog.

You’d be right because the Boerboel is naturally suspicious of strangers and very territorial.

However, while the Boerboels are excellent guards, these powerful dogs are also very affectionate, sweet, and eager to please.

They make perfect family dogs as long as they’re well-trained.

Since they’re one of the most dominant dog breeds, the Boerboel requires a confident owner to set boundaries and a lot of early socialization to prevent aggression.

While the Giant Schnauzer might look intimidating and scary, this amazing dog is highly intelligent, playful, bold, and adventurous.

By nature, the Giant Schnauzer is suspicious and shy around strangers. That makes this breed an excellent guard dog.

But these majestic dogs require a lot of socialization to curb aggression towards unfamiliar people and other animals.

Thanks to its dominant personality and independent thinking, the Giant Schnauzer isn’t right for inexperienced owners or homes with young children.

These dogs can be a handful even for experienced trainers. So, they need an owner who can enforce the rules without being forceful.

Moreover, the Giant Schnauzers aren’t dogs who would be happy without their owners. They prefer to stick close to you, and due to their size, they’re not suitable for apartments.

Siberian Huskies are a popular dog breed thanks to their striking appearance and piercing eyes. However, most owners don’t realize how stubborn and independent this breed is.

These wolf-like dogs require a confident owner to establish his position as the leader.

They will test any boundaries you set and take commands over the household if you show the slightest hesitation.

Moreover, they tend to become destructive inside the house when bored.

According to many owners, the Siberian Huskies are one of the worst dog breeds to train because they listen only to the pack leader.

So, if you fail to earn your Siberian Husky’s respect, you’ll have a hard time controlling their dominant tendencies.

The Caucasian Shepherd dog is a fascinating breed that impresses with its massive size and intellect.

These large dogs come from the Caucasus Mountains, where they used to herd livestock and work side by side with shepherds.

As a whole, Caucasian Shepherd dogs are very territorial and make excellent watchdogs. These dogs will never back off a fight and won’t hesitate to attack a bear or a wolf to protect their territory.

However, their fierceness and dominance are what makes them difficult to train and a bad choice for first-time owners.

These giants of the dog world should be well-socialized to curb their natural suspiciousness of strangers and aggression towards other animals.

The American Bulldog has often been represented in film and television, but they often get mistaken for American Pit Bulls and Dogo Argentino.

Initially, the Bulldog was used to bait bulls, which explains their fierceness, bravery, and independence. But they also make excellent family dogs because they’re very affectionate and loyal.

Due to their dominant personality, American Bulldogs are often suspicious of strangers and are always ready to protect their territory.

Fortunately, these dogs are eager to please and highly intelligent, so they’re easy to train.

However, American Bulldogs have high energy needs and don’t do well in apartments.

In fact, they’re one of the breeds most commonly banned for apartment dwellers.

If you’re asking myself “is my dog dominant?” and you have one of these handsome fellas, the answer is almost always “yep!”

One of the largest dog breeds in the world, the Neapolitan Mastiff, is quite the sight with their massive body, intimidating stature, and wrinkled face.

Despite their gigantic size, the Neapolitan Mastiff is often described as a gentle giant, who is affectionate and playful.

But this dog still has a dominant side and will test your boundaries and commands to see if you’re serious about them.

In addition to this, the Neapolitan Mastiff is quite protective of their family, and their deep bark is enough to make thieves and intruders think twice.

These dogs are rarely aggressive without a good reason, but they need a confident owner. Otherwise, they will try to dominate the household.

Like Pit Bulls, Dogo Argentino has quite a reputation around the world for being an aggressive dog breed.

The truth is that a well-socialized and trained Dogo Argentino will never attack unprovoked. However, these massive dogs are natural predators and will chase small dogs/cats/pets.

Moreover, the Dogo Argentino is independent, stubborn, and fiercely protective of their families.

Unfortunately, a lot of people take advantage of the strength and intelligence of the breed and train these majestic dogs to fight.

A timid owner will have his hands full with this dominant dog breed. So, they’re more suitable for experienced owners who know how to establish their position as the leader of the pack.

They’re also one of the most expensive dogs to own.

You might be wondering what a small dog like the Jack Russell Terrier does in our list of the most dominant dog breeds. Don’t let the size fool you.

The Jack Russell Terrier is a handful and can be twice as stubborn and independent as any large dog.

Jack Russell Terriers rarely get along with other dogs, and their willful nature makes them extremely hard to train. They also have a high prey drive and enough energy to drive you crazy.

Without a firm and consistent training, a Jack Russell Terrier won’t hesitate to pick a fight with a dog twice their size or try to dominate them.

All dogs need obedience training to form a tight bond with their owner and learn how to behave towards other animals/people.

But the more dominant a dog, the more important it is to take their training seriously.

Don’t get me wrong. These dominant dog breeds make excellent pets but for the owner who knows how be a good leader.

Last note- a lot of people search for tips on “how to break a dominant dog.” That’s the wrong way to look at it. You don’t break a dog, you train him.

Socialize him, teach him good manners, and be consistent with rewards. He’ll learn to see you as a good leader in no time!

What do you think about these 8 most dominant dog breeds? Have you ever owned one of them, and which one is your favorite? Share below!