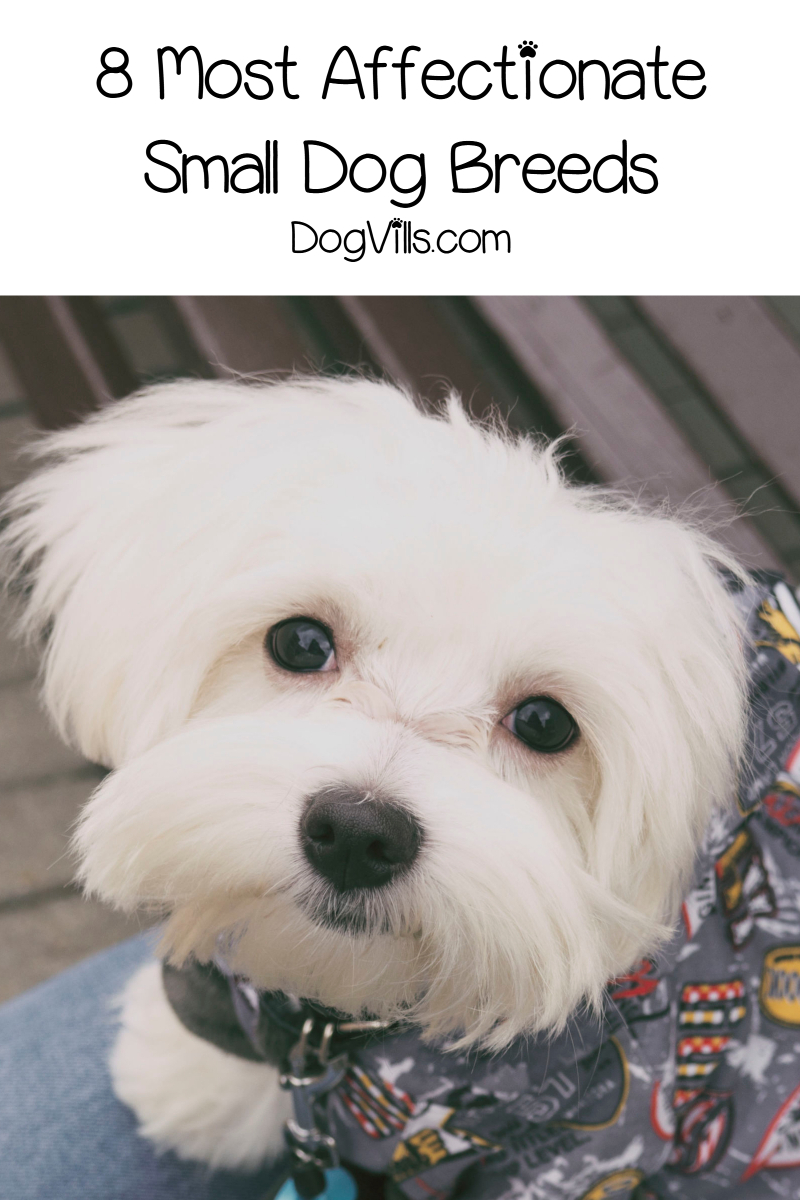 Are you looking for the most affectionate small dog?

Then you’ve come to the right place.

We’re going to talk about eight small dogs that love to cuddle.

Let’s find out what they are and see if your pup makes our list!

What are the most affectionate small dog breeds

However, the sole purpose of some dogs is to be human companions.

As such, they want nothing more that no be around you all day and cuddle on the couch.

So, let’s see which the most affectionate small dog breeds are.

A stunning white coat, deep black eyes, and a friendly expression capture the hearts of all who see an American Eskimo dog.

A Husky lookalike, Eski (for short) is a freethinker, full of endless energy, and loves to “talk” to his owners.

He is outgoing, friendly, and affectionate with everybody in the family, including kids and other pets. But he might be shy of strangers and bark at them.

These white furballs bond so strongly with their family that they don’t fare well alone. As a result, they might develop separation anxiety.

In addition to this, they have more energy than you can image and require quite a bit of exercise to keep them out of trouble.

Another dog to join the list of most affectionate small dog breed is the magnificent and aristocratic Bichon Frise.

You can hardly find a better small companion dog. The Bichon is happy, cheerful, and capable of charming anyone he meets.

Wherever the Bichon goes, he is the center of attention, and he likes to be fussed over and pampered.

Bichon Frise bonds so strongly to their families that they might be extra clingy at times.

Their constant demand for attention means that they don’t fare well if left alone and that they are prone to separation anxiety.

So, it’s not a dog breed suitable for people who work all day.

On the plus side, the Bichon sheds little, and it’s one of the dog breeds suitable for people with allergies.

Do you want a dog that will follow you everywhere and shower you with love and attention? Then Bolognese is the one for you.

This adorable fellow is part of the Bichon family and named after the Italian city of Bologna.

The Bolognese loves his people and their children. He will be your shadow wherever you go and happily nap in your lap when possible.

As such, these furballs can’t be left on their own for hours on end, or they will be miserable and unhappy.

On the plus side, these dogs are one of the healthiest breeds and unlikely to have any serious medical conditions.

But don’t be fooled by a Bolognese’s cute looks. This 10-pound furbaby is capable of manipulating his owner and getting his way. So, he requires a firm hand and the ability to say “no” to these irresistible puppy eyes.

You can’t but fall in love when a Cavalier King Charles Spaniel tilts his head at you and looks you with these deep eyes.

Cavaliers are such affectionate dogs that they often welcome even strangers with a wagging tail.

While they might occasionally bark at strangers, you shouldn’t count on them to be watchdogs.

Personal space and boundaries mean nothing to this adorable fellow. He will follow you in the bathroom and jump into your lap as soon as you sit somewhere.

They are truly companions dogs and feel miserable when you leave them alone.

When somebody says “small dog,” most people immediately think about Chihuahuas.

They’ve gained quite the reputation because you are so small that they fit in a tote bag.

As for its personality, Chihuahuas are more affectionate that you might have heard.

They love nothing more than to keep their human company in his daily activities and be part of the hustle and bustle of the house.

In fact, Chihuahuas tend to bond with a single person but can be friends with others if properly introduced.

Do you know that Shih Tzu means “little lion”?

Despite the name, Shih Tzus are one of the most affectionate and sweet-tempered small dogs you can find.

That’s because they were created to be companions – not to herd sheep, hunt rabbits, or watch over the house.

As such, Shih Tzus are happy to meet new people even and overly devoted to their owner.

Your lap is a Shih Tzu’s favorite place, and he will demand cuddles and belly rubs as much as possible.

Moreover, these adorable pooches love spending time with children and get on well with other pets.

But they are prone to eye problems, so keep an “eye” on them.

We can’t talk about the most affectionate small dog breed and miss the Pug.

Bred to be a lap dog and a companion, Pugs are often described as the clowns of the dog world because life is never boring with them.

Like most comedians, Pugs love to be the center of attention and get heartsick when left alone for long.

Besides being goofy, they are mischievous, playful, charming but also willful and independent.

Pugs are like a shadow and will follow you everywhere you go. They don’t mind watching a film with you or napping while you read as long as they are next to you.

Unfortunately, they tend to snore so you’ll have to get used to that.

Another magnificent dog who loves to be with his people is the Maltese.

His noble looks, silky white coat, and easy-going temperament make the Maltese one of the most captivating dog breeds you’ll ever meet.

He’s also one of the longest living breeds.

By default, the Maltese greets everybody friendly and tries to charm them with their cuteness.

He has a lively personality coupled with strong protective instinct and takes wells to obedience training.

In addition to this, thanks to its sensitive nature and sweet disposition, Maltese dogs are also suitable as therapy dogs.

Why should I get a small dog?

Choosing a small dog for a companion has its advantages. While some large dogs like to lie in your lap, a small dog is easier to cuddle and not as heavy on your legs.

In addition to this, small dogs don’t take much space, and you can take them into places where big dogs are not welcomed.

Moreover, most small dogs are breed to be family companions. As such, they are affectionate and devoted to their owners.

They also tend to have a longer lifespan than big ones.

On the other hand, most companion dogs form a close bond with their owner and can’t be left alone for long hours.

Otherwise, they might develop separation anxiety or indulge in destructive behavior to relieve the boredom.

In addition to this, small dogs are delicate. They might have the spirit and temperament of a big dog, but you should handle them carefully.

That’s why a lot of these dogs are not suitable for homes with toddlers.

Each one of these affectionate small dogs can turn your house into a home full of joy and happiness.

No matter which one you choose, a small ball of fur will be waiting for you with a wagging tail and eyes full of love when you come through the door.

Even if you haven’t been gone for more than a couple of minutes.

What do you think about these 8 most affectionate small dog breeds? Do you have any to add to the list? Tell us below!