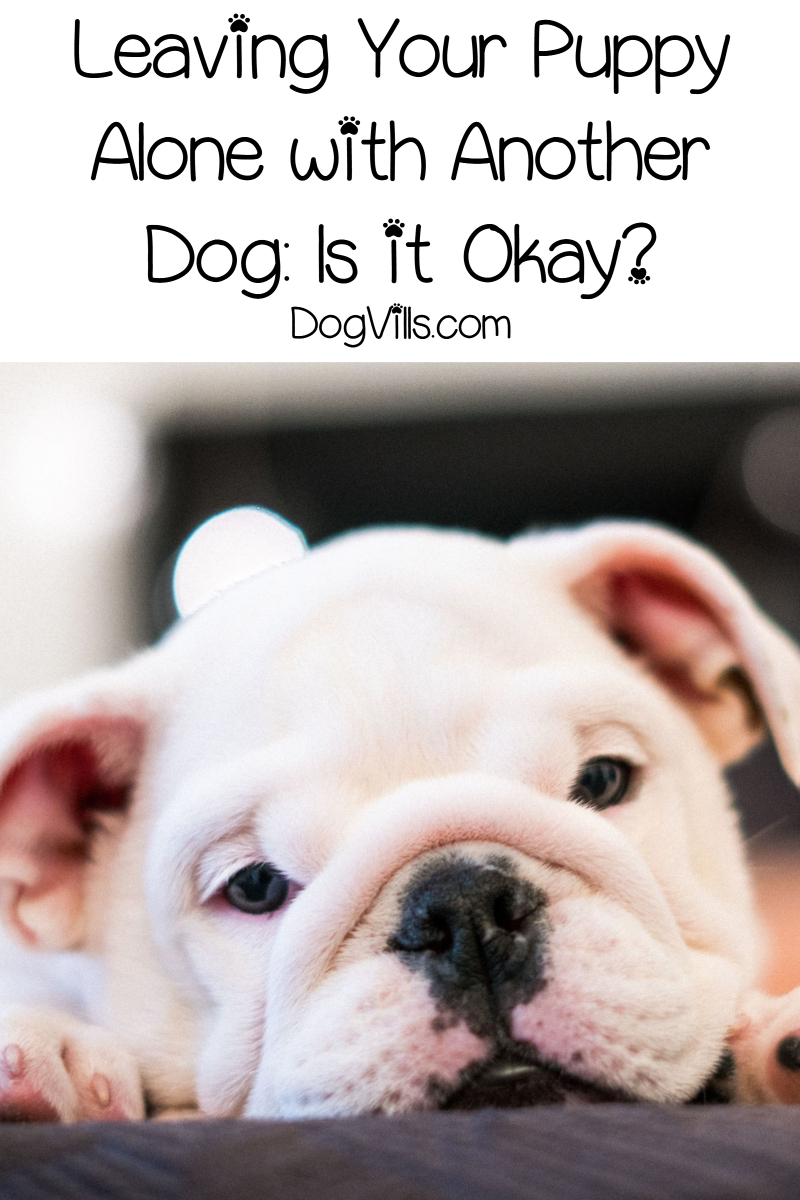 Can I leave my puppy alone with another dog?

Leaving your puppy alone with another dog is totally doable, but you have to do it right.

I’ve seen so many questions about this on dog forums, and I’ve fielded this question many times at the vet where I worked, as well.

It’s usually in relation to having to go to work or run errands.

Owners of newly adopted puppies may have to run out for a few hours or go to work all day, and wonder if their two dogs would be happier together rather than apart.

Today, we’re going to talk about leaving your puppy alone with another dog and how to do it properly.

The Importance of Leaving Your Puppy Alone the Right Way

Before we get into how to leave your puppy alone with another dog, it’s essential that we talk about why it’s so important to do it the right way – and there is a right way.

Too many dog owners often assume that if their current dog is a sweetheart and good with other dogs that it’s perfectly fine to put him with their new puppy.

In fact, he begs to go see other dogs when on a walk. What could go wrong? Unfortunately, a lot.

Behavior Can be Different Outside of His Territory

Remember, when on walks or at the dog park, your dog is not in his territory. There is nothing to protect there.

It’s an environment completely free of things that your dog feels the need to protect.

That’s not the case when he’s at home, and even the most well-behaved dog can have instinctive protective tendencies that you may not know about if you have a one-dog household.

While your dog may be sweet as pie outside his home territory, it could be a different story when he’s at home, and you won’t know that until you bring in your new puppy.

Anything could happen, which is why it’s so important to introduce your older dog and your puppy slowly.

The Danger of Introducing too Quickly

When I worked at the vet, we had a case of a puppy that almost died due to an older dog biting him.

It wasn’t a prolonged attack. It was one quick bite over a food bowl.

For an adult dog, that bite would have simply been an extra firm warning nip, but for a small puppy, it was almost fatal.

The owner had recently brought home a new puppy, and her older dog in residence seemed to like the newcomer well enough.

They made the mistake of leaving them unsupervised after only a couple of hours together.

While in another room, the owners heard the puppy scream, and when they made their way into the kitchen, they found the puppy laying next to the food bowl bleeding.

The older dog was nudging the puppy, not understanding why he was so still. To the older dog, a simple warning nip had occurred.

We were able to save him, and today, both dogs get along swimmingly, but it’s the perfect example of how you cannot introduce two dogs too quickly and assume that everything will be okay.

The video below goes over some tips on leaving a puppy alone at home. Check it out, then we’ll learn how to make it work with another dog.

Steps for Leaving Your Puppy Alone with Another Dog

You can’t just throw your older dog and your puppy together and then leave them unsupervised. That can be a recipe for disaster.

Rather, there are a few steps involved to getting to a peaceful, happy two-dog household situation.

Before introductions, it’s important that you prepare the home.

That’s the first and most important step to introducing your older dog to his new buddy.

In addition, set up an area where your puppy can stay when you’re out of the room or the house.

Use a dog gate to separate off one room in the house that is your puppy’s for now.

The dog gate will keep your puppy and your older dog safely separated at any time you’re not within eyesight, and it also allows them to interact on a limited level at the same time, promoting bonding.

Check out this video on introducing the two, then we’ll go over the steps in more detail:

Unless your current dog is leash aggressive – in which case, you shouldn’t be getting another dog – it’s important to introduce him to your new puppy while on-leash.

Keeping your older dog on-leash will ensure that should anything go wrong, you can quickly pull him back to help limit the potential for severe injury to the puppy.

Place your puppy in a room with lots of space, and then walk your dog into the room while he’s on his leash.

Watch for any immediate signs of aggression from your dog. These can include a raised, still tail, raised hackles, growling, and bearing of teeth.

If you don’t see any of that simply be in the room with your dog on-leash and allow the dogs to come together naturally.

Don’t force it. You want the introduction to be as natural as possible.

Whether your dog goes to the puppy or the puppy goes to your dog, be constantly on alert for any aggressive behavior and be vigilant, ready to pull back on the leash should your older dog snap.

Remember, as sweet as your older pooch may be, there’s really no telling what can happen with dogs.

Allow the two to interact as much as they want, provided everything is copacetic.

Only separate them when either one of them begins to show a loss of interest.

Remember, the first meeting isn’t about them becoming best friends out of the gate. It’s simply about them getting used to each other.

If everything went smoothly after the first interaction, you can allow your two dogs to pal around together with your older dog off-leash – just be sure you never leave them alone.

It’s important to have off-leash interaction because you never want your dog to be straining against his leash to reach your new puppy.

The foundation of leaving your puppy alone with another dog is good relations, and straining against a leash can give your older dog the feeling he gets when he’s trying to chase a squirrel or get to something he shouldn’t.

As your dogs interact together, be constantly on the lookout for any indication that things might be getting tense.

If everything seems good, continue this for as long as possible. If you don’t have anywhere to be that day, just shadow your two dogs for the entirety of the day.

Do this even if everything appears fine, even if they’re simply napping together. Remember, at this stage, anything could still happen.

Continue your ongoing, guided interaction for at least a couple of weeks before you even consider leaving your puppy alone with your older dog.

The key to all of this is making the puppy a part of your older dog’s daily life. You want the puppy to feel like a real, bonified member of the family before ever leaving the two dogs alone.

If, after a couple of weeks your dog and new puppy seem to be getting along, it’s time to start giving them limited alone time.

While they’re playing or sleeping, go to another room of the house that is close by, and let the two dogs interact naturally without your input.

Keep an ear open for any sounds of aggressive growling (dogs will growl while playing), any whining that is out of the ordinary, or any other sound that could indicate a potential problem.

If you don’t hear any of these, continue leaving the two dogs alone to do their thing.

If you have a smart home security system that has cameras, your phone’s app is a great way to give your dogs alone time while still keeping tabs on them. You can watch their interactions right from your phone.

Leaving Your Puppy Alone with Your Dog with Added Stimuli

Now, we come to the final step before leaving your puppy alone with your dog is officially safe. Adding in outside stimuli.

Put all the toys back that you normally take away when your dogs are together. They need to be able to be alone when toys are present.

It can feel a bit like starting over because you’ll need to repeat the steps above but at an accelerated pace.

Never leave the two dogs alone when you first reintroduce toys. Remain in the room at all times, watching for any signs of aggression.

If the two dogs are playing well together and there are no signs of trouble, that’s great.

As before, move to another room close by and listen for any sounds that could indicate any sort of potential problem. If everything seems good, continue letting them play together.

The final step before leaving your puppy alone with your dog is to let them roam around the house together all day.

By this time, your puppy is probably also potty trained, so let the two dogs hang out together day and night.

This way if anything does go wrong, you are at least in the house.

Do this for a couple of weeks, and if everything goes smoothly, it’s time to make it official.

Leaving Your Puppy Alone with Your Dog -It’s Time!

If all has been going well to this point, and the two dogs seem to be sharing toys and generally getting along, it’s time to leave them alone – officially alone.

You’ve done everything you possibly can to ensure that leaving your puppy alone with your other dog is a safe and happy thing.

Now all that’s left is to do it. If you’ve taken your time and been thorough in your approach, there’s no need to worry.

By the time you leave your two dogs alone together, they should be best friends.

Do you have any experiences to add about leaving your puppy alone with your dog? Share below!