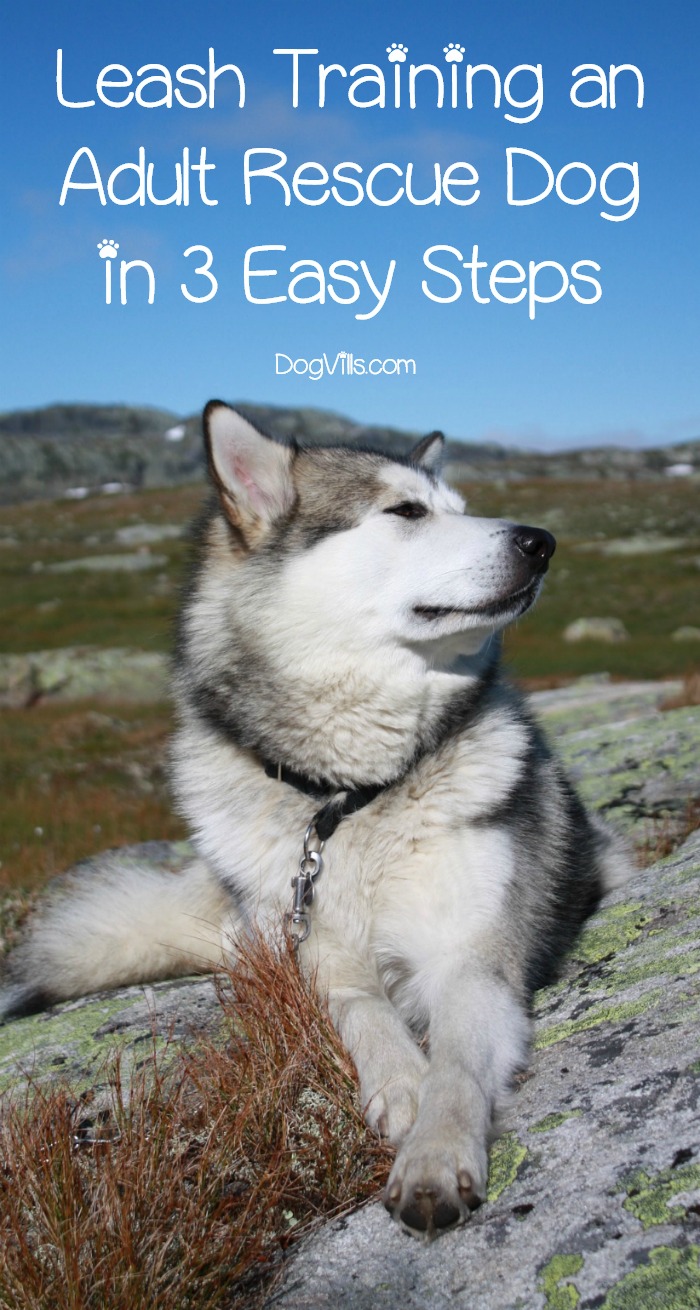 Does your rescue dog pull the leash when you take him for a walk? Has this turned into a problem for you? Then you have found the right place to learn how to leash train a dog properly.

I used to have the same problem with my collie/ mixed breed dog. He grew up big and powerful, and he used to carry me around the neighborhood as if I was a potato sack. I was reminded of these episodes from my childhood when I stumbled on the question “How do we leash train a 2-year-old rescued dog properly?”

As you can imagine, it’s no fun to fight with your dog for control every time you go for a walk. Not to mention that leash pulling might be dangerous if the dog is too strong and manages to run away. Fortunately, even an older dog could be retrained to behave properly and walk calmly next to you.

Before we dive into the question of how to leash train our older dog, we should look at the core of the issue.

Why does the dog pull the leash?

It’s not hard science when you think about it. Dogs pull because they want to get somewhere/ explore something/chase something and they are frustrated because we humans don’t move as fast as they would like to.

But a more accurate answer would be that we teach the dog that it’s ok to pull. Every time we allow the dog to pull the lead, we are establishing and reestablishing a pattern. “I pull, I get what I want” – that’s what your dog has learned and in his mind pulling means rewards.

That’s where training has to come in place and teach the dog that pulling won’t get him near his target more quickly and that a loose leash is what will get him the reward.

How to leash train a 2-year rescue dog (or any adult dog, for that matter)?

Affliate links included below. Thanks for your support!

As you can imagine, it’s not easy to reteach an older dog that pulling is bad after he has some experience that points to the opposite. You’ll need a lot of time to teach him the new rules, and it’s important that you don’t use any punishment. It will only make thing worse, especially when it comes to rescue dogs.

Before you start your leash training lessons, you have to make sure that you have everything you need. In this case:

When dealing with older dogs, it might be a good idea to get a training lead

. This is a shorter leash, which keeps the dog close to you and allows you to correct inappropriate behavior more quickly.

Another option is to get a head halter

, which is a specially designed collar to stop your dog from pulling. It looks a lot like a muzzle, but it’s not because your dog can still bark and bite. Although the head halter doesn’t cause pain, most dogs will hate it at first. As a result, you’ll have to spend some extra time getting your dog used to wearing one.

For some dog owners using a head halter is cruel. So it’s up to you to judge its pros and cons. But never use shock or prong collars. Unlike halters, they cause pain and physical damage.

2- Deal with the excitement

What does your dog do when you pick his leash and prepare for a walk? He probably runs happily around in anticipation of going outside because he knows what is happening. And an overly excited dog is more likely to start pulling to get to his favorite spot in the park.

The solution is to calm your dog before going for a walk. If he gets excited while you’re putting on the leash, stop and back off. Repeat this until your dog understands that excitement won’t get him out of the door.

It’s also a good idea to burn off some of your dog’s excess energy by having an exercise session before going for a walk. A tired dog is less likely to start pulling on a leash than one who has been sitting all day at home with nothing to do.

Also, my advice is to start small. By this, I mean short training sessions around the neighborhood. The familiar landscape won’t be as interesting to your dog as new sights, and you’ll be able to start reinforcing the new rules.

3- Stop the dog from pulling

When your dog starts pulling on the leash you have several options:

When the dog stops pulling his leash, call him back to you. Then offer him a treat and praise him. Repeat as often as need.

Eventually, Lucky will learn that walking on a loose leash next to you means tasty food and will stop trying to pull you around.

Remember that retraining a rescue dog to walk on a leash properly takes time. Don’t expect a quick change in the behavior and be patient above all.

What about your dog? Does he pull the leash? How did you leash train him? Give us your advice in the comments.