It’s difficult to admit that you have an aggressive dog because people start to assume that you’re not doing the best you can.

I think that the opposite is worse – owners who turn a blind eye to their pet’s behavior and pretend that everything is normal.

A dog who reacts badly to other dogs should be handled carefully to avoid incidence.

So, today we’re going to talk about what to do if you have a dog, who is aggressive to other dogs or puppies and how to keep it from attacking them.

We will begin by looking for the root of the problem.

How to Keep an Aggressive Dog in Check 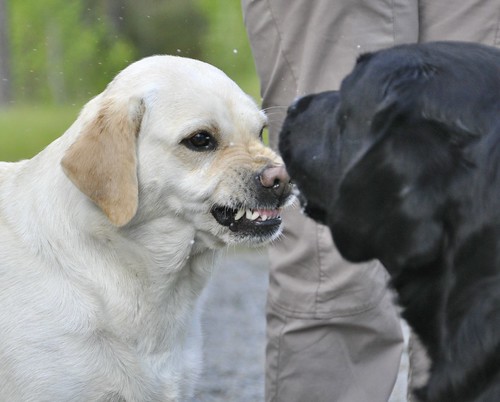 My neighbors have this adorable Golden Retriever in their front yard. It’s a friendly dog, so you can pat him without fearing a bite.

However, this sweet disposition disappears the moment George spots a dog or a cat across the street. He runs along the fence, jumps, growls, and barks so much that you might think that someone is getting murdered on the street.

What makes George go from sweet and cuddly to full-on attack dog in the blink of an eye? To find out, we need to look at the root of aggression in dogs.

Why are dogs aggressive to other dogs?

Let’s go back to my neighbors and their pooch. What we have here specialists call fence aggression.

The dog sees something that he wants to investigate or check, but the barrier prevents him from reaching it. As a result, George gets frustrated and starts barking and pacing along the face.

With time the frustration builds-up and things might escalate if we have two dogs living door to door and barking at each other at every possible moment. Imagine it as two boxers who are practicing to fight, so when given a chance they will attack each other.

Another reason why a dog might react negatively to another dog is territory.

From the dog’s point of you, your yard and home are his domain and any unfamiliar dogs that approach are considered a threat. That’s why the dog will fight to protect what’s his.

Other possible causes include:

So, depending on the cause for dog aggression, here are some tips:

If George is barking at other dogs through the fence, you have a couple of options.

The first thing you can do is block his view of the street/neighbor’s yard. If he can’t see the trigger, he won’t get frustrated or start barking. You can plant shrubs, install screens or put a second fence.

You can employ the same tactic while leash walking. Stand in front of your dog and block his view of the incoming dogs or use cars or trees as a barrier. Be aware of his triggers and try to avoid them in the first place. 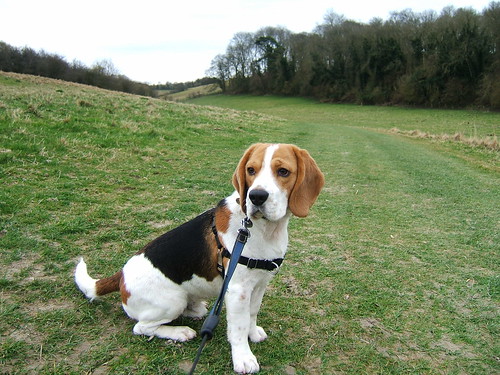 The other thing you should do is provide exercise. Fence aggression usually stems from boredom. George has nothing better to do than bark at whatever is passing by him. The person/ the dog moves away, so in George’s mind, he has chased it away. He has done a good job so that he will do it again and again, and again.

As I like to say, a tired dog is a happy dog. George won’t have the energy to jump and pace along the fence if you’ve tired him walks and exercises.

If you know that your dog is going to react badly to another approaching pooch, you’ll probably tense in anticipation of troubles.

George feels that you’ve suddenly gone from relaxed to worried, and it will put him on edge. He will react aggressively towards the other dog in an attempt to protect you.

That’s why you have to remain composed when in the presence of other canines. Don’t let George feels that you’re uncomfortable. Stay calm and relaxed, and in time he will start mimicking your behavior.

If another dog approaches, here are a couple of things to try to avoid a confrontation:

Now that you’re calm, check out this great video on how to calm down any dog!

You can try to get your dog used of unfamiliar pooches by using positive reinforcement and desensitizing techniques.

Explained in simple words, you want your dog to connect the presence of unknown dogs with pleasant things like treats or extra attention so that he doesn’t want to attack.

The desensitizing’s purpose is to lessen the dog’s reaction to unfamiliar canine practicing in quiet, controlled environment.

In the beginning, the dog stays far way not to trigger your George, and you work on shortening the distance between the dogs. This approach will take time, and you will probably see results after weeks or months of work.

Frankly speaking, some dogs will probably never be completely comfortable around other canines, but your goal is to avoid outright attacks and injuries. As a last resort, you can teach your dog to wear a muzzle to prevent incidents. It’s certainly not a pleasant alternative, but it’s better than having to worry about fight breaking.

You also have to learn to anticipate your dog’s trigger and take measure to avoid them as much as possible. Always be on guard. Even if your dog hasn’t had an aggressive incident in months/years, relapses are a possibility.

An aggressive dog is a serious problem, so don’t take matters lightly.

What do you think about these tips to prevent an aggressive dog from attacking another dog? Leave us a comment below.