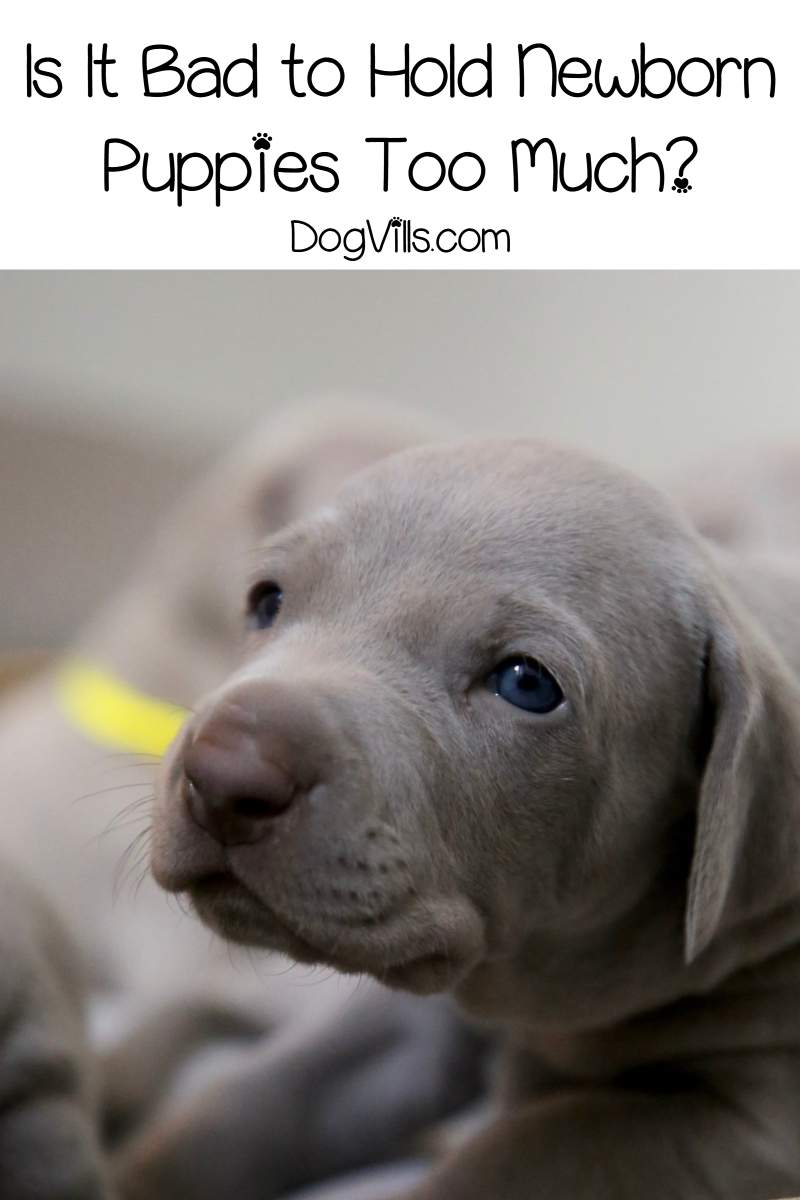 Are you wondering if it’s bad to hold newborn puppies too much?

You might be worried that the mother would reject her puppies if you overstep your boundaries.

So, today we’re going to talk about some important rules for handing newborn puppies.

Is It Bad to Hold Newborn Puppies Too Much?

Newborn puppies are born deaf and blind, and they rely on their mother for protection, warmth, and food.

However, these tiny, helpless creatures are going to double their weight in the first week of their life and will grow big and strong before you know it.

Looking at how cute newborn puppies are, you might find it hard to resist to touch and cuddle them. But should you? Let’s see.

Should You Touch Newborn Puppies at All?

A lot of people believe that a mother dog will reject her puppies if the owner touches them even briefly.

Let me assure you that this belief isn’t true at all. I’ve reared a lot of puppies and kittens, and I’ve handled them from the moment they were born.

As most professionals would tell you, you should handle newborn puppies to make sure that they’re thriving and developing as they should.

A newborn puppy can turn for the worst in a couple of hours, and you have to act quickly if you want to save them.

Sometimes, when the mother births a lot of puppies, she doesn’t have enough milk for all of them.

In these cases, you’ll have to bottle feed the young ones, or they’re not going to survive.

In addition to this, not all dogs make good mothers.

So, if you notice that your dog isn’t taking good care of her puppies, you’ll have to step in and do all you can to ensure their survival.

Early handling also get puppies used to the human touch and presence.

As such, puppies handled from birth grow up to be more affectionate or tolerant of people.

When Should You Touch a Newborn Puppy?

Whenever I’ve carried for puppies or kittens, I’ve kept a vigil over the mother and her offspring for the first few weeks.

You want to make sure that all the puppies are nursing well. Sometimes puppies fail to latch on a nipple or might be pushed away by their brethren.

If a puppy can’t nurse, they quickly weaken, and their blood sugar drops.

The weaker they get, the harder it’s for these puppies to nurse, and eventually, they give up.

Moreover, puppies should be cuddling with their mama or sibling to keep warm.

Newborns can’t regulate their temperature and will get cold quickly if they move away from their siblings and mother.

Specialists recommend that you touch your dog’s newborn puppies as little as possible during the first few weeks.

Ideally, you want to measure them daily to make sure they’re gaining weight. You’d also have to change the sheets in the birthing box to keep the puppies clean.

Besides that, you shouldn’t interfere if the mother is nursing, bathing, and cuddling with her puppies.

Any unnecessary attention might make the mother anxious and prompt her to act defensively.

You have to be prepared that not all puppies are going to make it.

Unfortunately, the signs that something is wrong with a puppy appear very suddenly.

So, whenever you notice that a puppy appears listless, doesn’t nurse, and whines, you have to rush them to the vet and be prepared for the worst.

How to Handle Newborn Puppies?

Knowing how to handle puppies is an essential rule for interacting with newborn puppies.

Remember that these puppies are fragile, and falling from a short distance can be deadly for them.

So, be sure that you’re supporting your puppy’s body and that you’re holding them gently.

Don’t pet newborns as you’d pet an adult dog. Instead, run a finger or two along their backs and side and keep petting them only for a few seconds.

Whenever you’re touching the puppies, remember to wash your hands first.

Newborns don’t have a well-developed immune system, so you don’t want to expose them to any viruses or bacteria.

I won’t say that it’s bad to touch newborn puppies too much, it’s something I don’t recommend.

A minute or two is enough per day during the first few weeks. You don’t want to overwhelm the mother or the puppies.

Why Mother Dogs Reject Their Puppies?

Often first-time mothers, who were bred young, don’t know what to do because their maternal instincts haven’t kicked in yet.

So, they don’t know how to care for their puppies and might turn aggressive towards the puppies or accidentally kill them.

In addition to this, dogs have an uncanny sense of smell.

A mother knows when something is wrong with a puppy, even if the puppy looks normal.

It makes sense for the mother to focus her energy and resources on the healthy puppies than the sick ones.

Besides puppy illness, sometimes, mother dogs get ill and aren’t up to caring for their litter.

I’m talking about breast inflammation and birth complications, for example.

Any breast infection makes nursing very painful for the mother, and she might not be able to stand nursing her puppies.

Birth complications, such as uterus infections can make the mother lethargic and feverish.

As such, you should keep an eye not only on the puppies but their mother as well.

Take your dog to the vet if you notice any abnormal vaginal discharge or redness around the nipples.

Will My Dog Bite Me If I Touch Her Puppies?

So, will your dog bite you if you touch her puppies?

That’s a tough question, and I can’t give you a definite answer. You know your dog and her temperament the best.

If you have a close bond with your dog, she will probably allow you to handle her puppies.

But keep in mind that even the mellowest dogs might get gets maternally aggressive.

What I can advise is to approach the mother and the puppies slowly.

Any growling, snapping, lunging should show you that you aren’t welcome near the birth box.

So, you should stay away unless the puppies are sick or in danger.

Besides growling, some mothers might move their puppies after you’ve handled them.

In such cases, you should let the mother be and keep your distance.

You don’t want her to move the puppies somewhere you can’t reach them or where they would be in danger.

It’s not bad to touch newborn puppies as long as you’re careful and keep contact to the minimum.

Be mindful of the mother’s reaction and remain a silent observer unless you think something is wrong.

Is it bad to touch newborn puppies too much? What’s your experience? Tell us in the comments.