How to train a Saint Bernard puppy is what we have on the agenda for today! One of the most immediately recognizable breeds in the world, the Saint Bernard is a massive dog full of power. Don’t let that intimidate you, though. They’re actually very gentle creatures.

When we think of this breed, we almost always think of the classic scene of a dog rescuing a person from deep snow or a similar scenario. It’s no surprise, really. After all, that’s exactly what they were originally bred for.

These days, the Saint Bernard is a consummate family dog with an incredibly good nature. That being said, you’ll have to take training him seriously, as he is quite a big dog. So today, we’ll go over the basics. With these tips and strategies, you’ll have a solid foundation for more advanced training later on. Let’s begin, starting with what you need to know about your new pup’s overall temperament.

The Saint Bernard has a fascinating history! Whether from anectodThis huge working dog hails from the western Alps in Italy and Switzerland, where he was originally used by the Hospice of Great St. Bernard Pass on the Italian-Swiss border all the way back in 1050 CE.

These dogs were truly bred to be gentle giants. They had to be enormous to traverse the snowy terrain yet gentle enough to rescue those they found trapped without further injuring them. These requirements led to a massive dog with an equally massive heart.

Saint Bernards are loving dogs with an instinctive friendliness that makes them quite sociable. These placid giants are friendly, gentle, tolerant, and eager to please. However, they are also protective and will quickly respond to threats. This combination makes them an excellent family dog for those who have children, as they will put up with almost anything and are also instinctively protective.

Perhaps the best part of this combo is that even though they are protective, these dogs do not view the world as an inherently hostile place the way some other protective breeds tend to view it. Saint Bernards are a deeply affectionate, loving, and friendly breed. They easily make friends with other humans and animals, and they love to be in the center of the action with their families.

The only drawback? Their need to be with their families can make them sulky if they feel left out. Meanwhile, their giant size and immediate desire to make new friends mean that they should be trained early to minimize any accidental injuries to children or smaller dogs.

Speaking of training, remember when I referenced their eagerness to please? You guessed it. Saint Bernards are fairly easy to train because they want to please their owners. 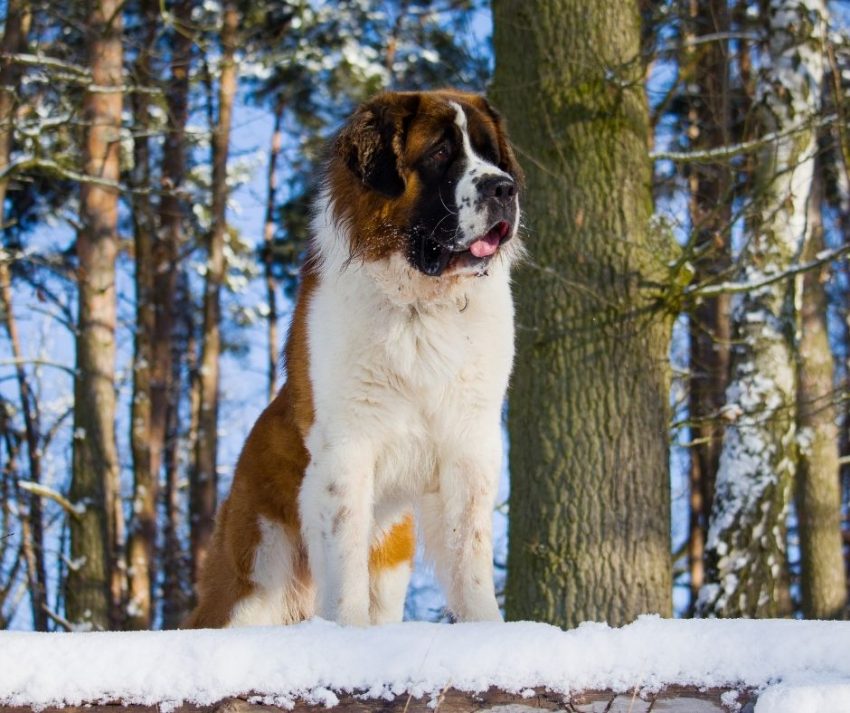 How to Train a Saint Bernard Puppy

Like any other breed, you should begin training your Saint Bernard puppy early. While the traditional thought has always been to begin formal training at around 6 months of age, recent studies have shown that puppies are actually quite adept at picking up training ques at as early as seven to eight weeks old. Think of young puppies like toddlers. They’re rambunctious and rowdy, but they also soak up information like a sponge. As long as you keep your training short in the beginning, you can start training your Saint Bernard puppy very early on. 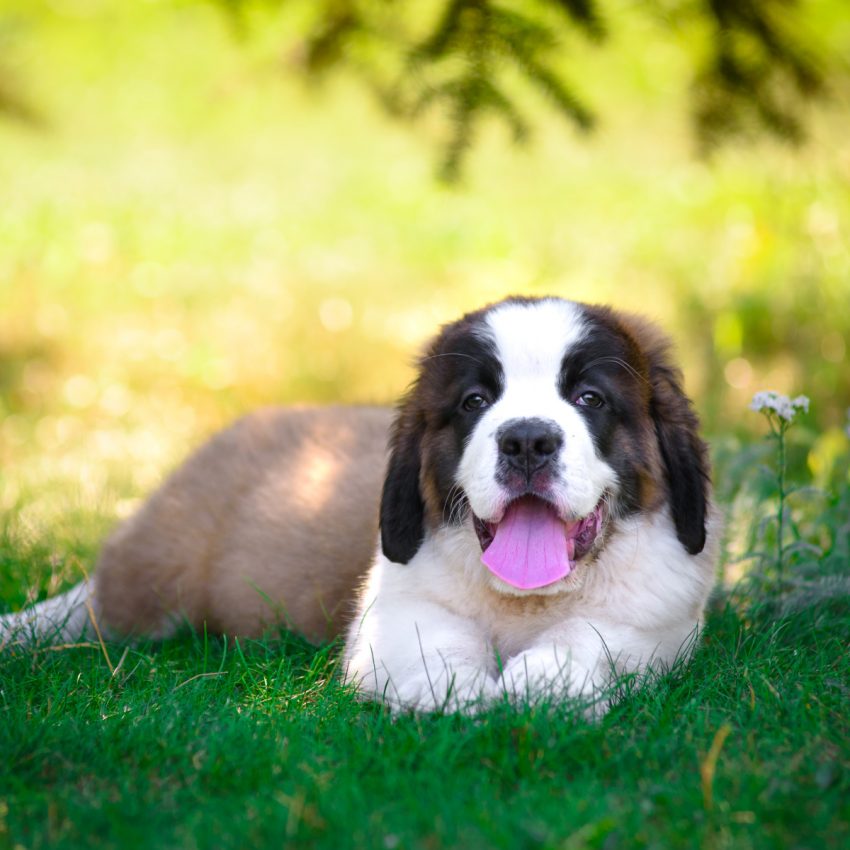 When I say keep training short, I’m not kidding. With a puppy as young as seven or eight weeks old, you’ll need to keep training sessions at around five minutes to start. Training only works when your dog is engaged. If your puppy is bored and won’t pay attention, he’ll get nothing out of the training, and you’ll only end up getting frustrated. It’s better to get in a good five-minute block of productive training that leaves both you and your pup feeling good than trying to force something longer in the hopes of “cramming” in more progress.

Start with the Basics

Remember, you wanted to know how to train a Saint Bernard puppy. So we’re doing puppy things. As I just said, starting early is key. So are brevity and simplicity, so we’re focusing on the things that make a good foundation for your puppy going forward.

Leash training is important for any dog, but it’s vital for a Saint Bernard. He’s a friendly giant, but he’s not always gentle when he’s very young. Teaching him to walk nicely on a leash will be greatly beneficial down the line when he grows up to be a fluffball in the area of 140 to 180 pounds.

Begin by having your Saint Bernard wear his harness everywhere so he gets used to the feel. After that, attach his leash and let him run around with that until he’s used to it. At this point, the goal is for him to be comfortable with both, so don’t worry if he uses his leash as a toy. As long as he’s not afraid of it, you’re good.

After he gets used to the leash and harness, start walking while holding the leash. He’ll naturally want to follow you, so it will be easy to teach him this. As he follows along, give him treats and praise. Periodically stop to get him used to the idea of stopping when you do. If he stops when you stop, give him praise and a treat. Repeat this process, and he’ll have it down in no time.

Sit is another very important command to teach your Saint Bernard puppy. With a dog this huge, the most innocent thing could end up hurting a child, a cat, or even a small dog, so it’s important to have a command like sit down pat. When you tell your dog to sit, he should immediately put his rump on the floor after he’s mastered this command. It’s a good one for helping to keep him from jumping on people or trampling smaller animals in his excitement.

To teach sit, hold a treat in front of your puppy’s nose. Then, slowly move the treat over his head and toward the back of his skull. He’ll naturally lift his nose to follow the treat, and he’ll usually end up in a seated position. As he begins to sit, give the “sit” command and reward him liberally when his butt touches the floor. Repeat this process until he sits as soon as you give the command.

The perfect partner to sit, stay goes hand-in-hand with keeping your Saint Bernard from exuberantly pouncing on people and animals. After your puppy has learned to sit, give him the stay command and walk backward a few steps. Don’t go far. Just make a small amount of space between you and your dog.

If he stays, walk back and reward him. Repeat this process, moving further and further away. When he’s gotten older, you can graduate to giving the stay command and walking across the room. Again, if he remains where he is, reward him profusely.

Finally, we have the come command. Come is perfect for calling your Saint Bernard back is he gets into trouble or to simply release him from the stay position. Give your pup the sit and stay commands, then walk away. By now, your dog will have mastered staying in place, so the next part might confuse him a bit.

After you’ve moved away, give him the come command. He may not move immediately. That’s okay. Remember, you’ve taught him NOT to move, so he’s doing his job. If he doesn’t come to you take out a treat and give the come command again.

If he’s a particularly good boy, you might even have to animate yourself to get him to move. By that, I mean wave your arms, jump up and down, or whatever else gets him so excited that he can’t help but run over to you. Again, that’s okay. When you finally get him to come to you, reward him with praise and treats. Repeat this process until he comes to you on command.

You should never attempt to use negative reinforcement with any dog, but that holds especially true with Saint Bernards. Knowing how to train a Saint Bernard Puppy means understanding their temperament. Saint Bernards are deeply loving and deeply sensitive.

They want to please you, so there’s no need to ever yell or otherwise negatively correct your pup. Always reinforce and praise the behavior you want and simply ignore the behavior you don’t. Negative reinforcement only makes your pup afraid of you.

FYI: If you’re more of a visual learner, check out the video below to see these training tips (along with a few others) in action:

Now You Know How to Train a Saint Bernard Puppy

That’s really all there is to it. Saint Bernards are incredibly eager to please, outgoing, and don’t have an excess amount of energy. That makes them wonderful family dogs and great training partners.

Your Saint Bernard puppy will be eager to please you, and if you make training fun, he’ll view it as a fun activity he gets to do with his best pal. So remember, start with the basics, always use positive reinforcement, and keep your sessions short but productive. If you do that, you’ll raise a gentle giant who’s the “goodest boi” ever.

Do you have any other tips on how to train a Saint Bernard puppy? Share below!