Are you wondering how to introduce a puppy to a dominant dog?

Adding a second dog to your household can be stressful when you’ve got another pet with a dominant personality.

Fortunately, we’re here to help you with an easy 7-step guide on introducing a dog and a puppy.

When you have a dog, especially a dominant one, getting a puppy shouldn’t be a spur of the moment decision.

Not all dogs like company, and older dogs often don’t have the patience to deal with an energetic puppy that wants to play all the time.

Introduce your puppy the wrong way, and your dominant dog might never accept them into the family. And living with dogs that don’t like each other is a nightmare.

So, we’re going to talk about what a dominant dog is and how to introduce a puppy without making your dog feel threatened.

What Is a Dominant Dog?

Before we talk about how to introduce your puppy to a dominant dog, we need to understand what that means.

The whole “alpha/dominant/pack” myth is just that, a myth (see the video below).

However, that doesn’t mean that a dog can’t have a dominant personality.

A dog aggressive to other dogs is one thing, while a dominant dog – another.

Dominant dogs might mouth other pets, make their own rules, refuse to obey commands, and push other dogs aside to get what they want.

When faced with a challenge, a dominant dog will stand their ground, while a timid one might choose to run instead of fight.

On the other hand, lunging, raised hackles, pricked ears, growling, and showing teeth are signs of aggression, not dominance.

If you aren’t sure whether your dog intolerant of other dogs or just has a strong personality, you should talk to a specialist before introducing a puppy.

To test the waters, you might consider dog sitting for a friend.

How to Introduce a Puppy to a Dominant Dog?

Introducing a puppy to a dominant dog is a process that will take time. Don’t expect that your dogs will become best buddies in a couple of hours or days.

If you rush things, you risk making the wrong impression and make your dominant dog feel threatened.

If you have a dominant dog, you should consider three things when choosing a puppy: size, gender, and personality.

Picking the right puppy to add to the household is almost as important as proper introductions.

As a rule of thumb, dogs do better with dogs of the same size. Large dogs might see small ones as prey and try to kill them.

Toy breeds often also don’t realize how fragile they are and pick a fight with a dog twice their size.

Gender also matters when you’re getting a second dog. Two males are likely to fight over females or get possessive of their owners.

Two females can fight viciously to protect their territory.

That’s why specialists recommend that you get a puppy of the opposite gender when you’re considering a second dog.

I would add that it’s better if the puppy is more submissive than your dominant dog to avoid conflicts.

Fortunately, most puppies are “timid” around grown-up dogs and don’t tend to pick up fights.

However, that could change as the puppy grows up.

So, observe how the puppy interacts with other puppies to understand their temperament.

Introducing a puppy to a dominant dog starts with preparation.

You have to create the right environment at home to prevent fights, resource guarding, and stress:

When it comes to introducing dogs, the biggest mistake you can do is meet them inside the house.

Your home is your dominant dog’s territory, and they will see any puppy as a threat and might become aggressive.

You should pick a neutral ground to make introductions, a place where your dominant dog won’t feel threatened by the puppy.

Ideally, it should be an enclosed space so that you don’t have to worry about the dogs running away. 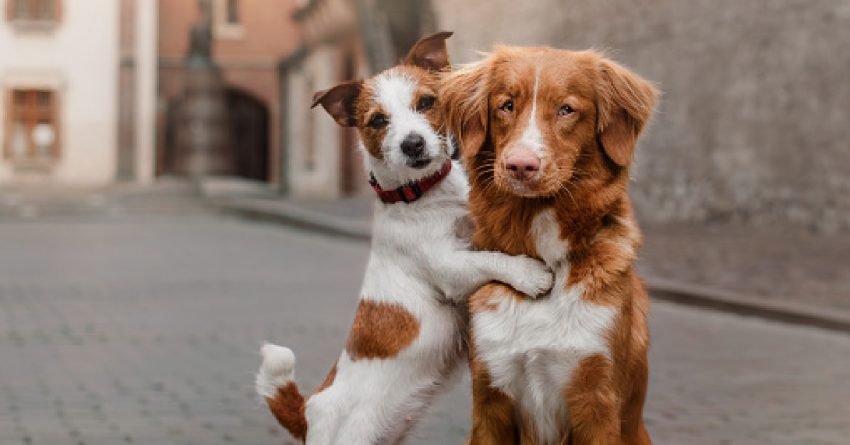 When you’re introducing a puppy to a dominant dog, you want to have both dogs on a leash and at a distance where the older dog doesn’t react negatively.

That’s why you need the help of a friend or family member.

Initially, keep the puppy and the dog distracted with toys/ treats. Then move them close to one another when both pets are relaxed.

Once the dogs are within sniffing distance, you can let them interact without forcing the matter.

Expect that there would be a lot of snuffing, some barking, and excitement.

While your dogs won’t become best friends during this brief introduction, they must have a positive first impression and connect each other’s presence with good things.

That’s the foundation on which you’re going to build in the following weeks.

#5 Watch Out For Bad Signs

Depending on how dominant your dog is, they might tolerate the puppy’s presence or become hostile.

Observe the body language to judge how acceptive your dog is of the puppy and keep an eye for signs in aggression in the puppy.

#6 Keep It Short And Stay Calm

The first introduction should be quick. Once the initial excitement and suspicion have passed, you can bring the dog and puppy home.

If the puppy is old enough and has all the shots, you can go for a short walk around the neighborhood and then go home.

It’s normal to be nervous about how the first meeting will go. However, try to radiate calmness and assertiveness.

Dogs pick up on our emotions, and if you’re anxious or afraid, your dominant dog might regard the puppy as something “negative.

It’s for the best to keep the puppy and your dominant dog separated for the first few weeks. You want your dogs to get comfortable with one another without getting overwhelmed with each other’s presence.

It’s natural to want to dote on the puppy, but that will only create tension.

Your dominant dog should still feel that they’re the “boss,” and they should get food, walks, and attention first. Spoil the puppy in private.

Don’t leave the puppy and your dominant dog alone, even for a couple of minutes.

Puppies don’t always know how to act around adults and might provoke the other dog accidentally. You want to be there to intervene in case things get out of hand.

Once you’ve introduced your puppy to your dominant dog, it’s going to be a hard couple of weeks.

Here are a couple of tips to make it easy for you:

Introducing a puppy to a dominant dog is a doable task as long as you do it slowly and are prepared for the responsibility.

Older dogs usually are less wary of puppies and are willing to give them a chance, but you still have to be careful.

If you notice that your dominant dog chases, bites, or hurts the puppy, they aren’t happy about the new introduction.

You’ll have to keep the two dogs separated and should consider talking to a professional.

What do you think about these 7 tips for how to introduce a puppy to a dominant dog? Have you ever done it? Share your experience in the comment section.