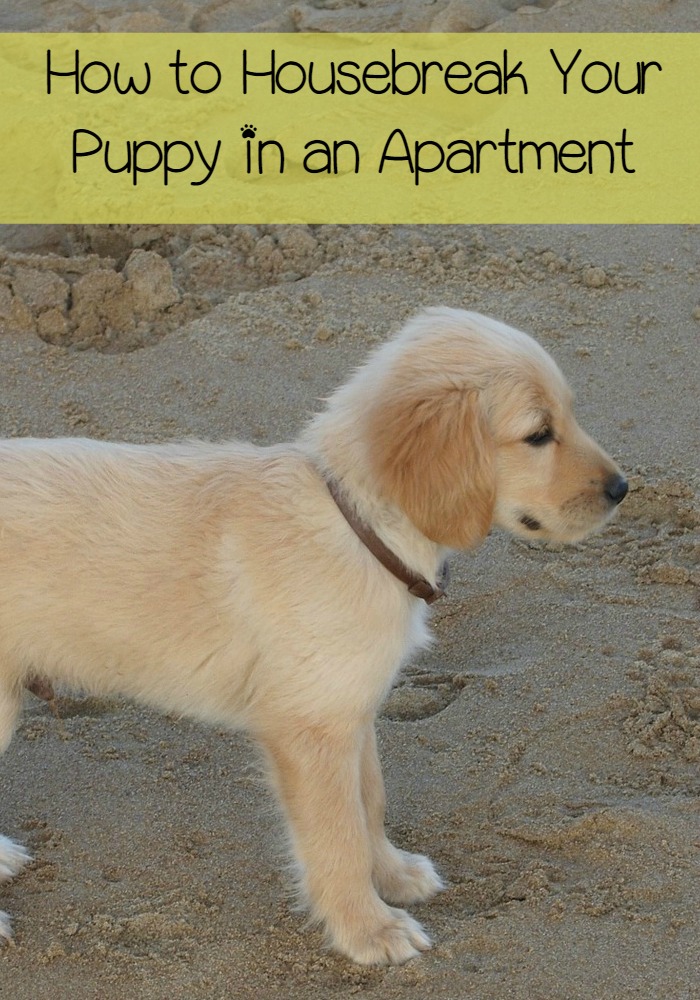 Related: How to Housebreak Your Puppy Without a Crate

How to Housebreak Your Puppy in an Apartment

The 20 minute rule: Establishing an outside routine will save you aggravation of running down the stairs while your poor pup (who has no idea what is going on) is trying to hold his pee because you snatched him up mid stream.  You should expect to be outside every 20 minutes or so.  Pup ate?  Outside in 20 minutes.  Pup napped and woke up?  Get outside.  Pup just played with you around the apartment?  Take him outside.  Don’t expect your pup to be able to hold his bladder more than an hour, even when he is an older pup, he just doesn’t have the control yet.

Establish dinner time: Feeding your pup at the same time everyday will help with housebreaking (sounds weird I know).  Dogs like routine as much as we do!  They do well when they know what to expect (and who to expect it from).  My dogs get a morning treat from my mom, they go nuts when she wakes up.  When she is gone for the night, funny thing, they don’t do the same for me.  She is the giver of the morning treats.  But I digress, we are talking about dinner.  Feeding your dog at the same time every day will establish the potty break as well.  Twenty minutes (or less) after he eats, take him outside.

Related: Apartment Living with Dogs – How to Make it Work

Same spot every time: Think about it, when you go to the bathroom (which is always in the same place I am assuming) you know what you are doing there.  Sometimes, with kids, they don’t ‘have’ to go until they are in the bathroom.  Dogs are the same way.  I don’t mean to compare your dog to your child, but in this case it seems to work well, so bear with me.  When you take your dog to the same place every time you take him out to go potty, he will learn what he is out there to do.  He won’t be wondering why you didn’t bring a ball to play with or think maybe he is going for a walk.  He will see (and smell) his spot and think ‘Oh she must want me use my toilet’.  Just be sure to pick up after him (you don’t need to invest in those cute little sweet smelling doggie bags, a plastic shopping bag works just as fine).  Also, try to steer him away from urinating on any flowers, it tends to kill them.  You don’t want to be known as the lady (or gent) whose dog killed all the pretty flowers in the area.

Reward: Who doesn’t love a reward?  Dogs love treats and they will do just about anything to get one, including go potty on command.  So keep a bunch of training treats in your pockets when you go outside, reward for when he goes, so he learns, ‘Oh sweet, I go pee and she gives me a treat, but only when I am outside’.

Some may think that housebreaking a puppy in an apartment is impossible or maybe just more of a hassle than if you lived in a detached home.  Sure, it might take a little bit more work on your part, depending on what floor you live on and such, but it is not impossible.  I know for me when I lived on the third floor of an apartment building and had to go out to let my dogs out, in the bitter cold of winter, it was not fun (and I wasn’t even housebreaking!) but you both will do better if you put the work in early and get your pup housebroken!

Have you ever had to housebreak a puppy in an apartment before?  What did you do?  What were some difficulties you had?  Share with us below!