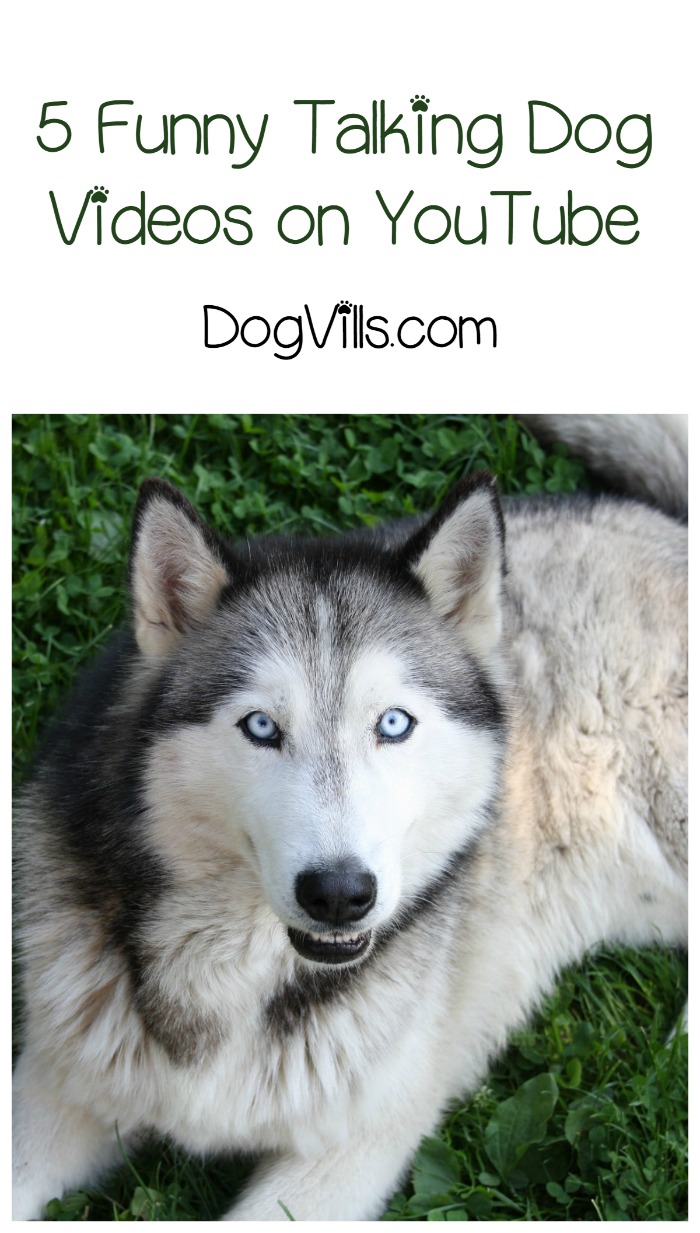 Nothing brings a smile to my face on a dreary Monday morning better than browsing funny talking dog videos on YouTube.  Sure, I know that dogs can’t actually speak “human,” but some dogs imitate their people so well it almost sounds like they’re really speaking. Then there are the “animal dubbing” videos. Oh, these crack me up!  Animal dubbing is, as Andrew Grantham explains, “When you sit down and really pay attention, especially with the sound off, to the expressions of an animal in a video, it’s almost like a story emerges without even trying. If not, it’s the wrong video.”

If you love funny talking dog videos on YouTube as much as I do, you’re in for a treat. I’ve rounded up a few of the most hilarious (and realistic!) clips . Check them out, then share your favorites in the comments! We could all use a good laugh!

Ultimate Dog Tease– This video is 1:21 in length and has 181,959,839 views to date. The video was made by Andrew Grantham, who has done numerous animal dubbing videos. His video titled Ultimate Dog Tease was named YouTube #1 Video of the Year in 2011. In the video, Andrew is teasing the dog talking about treats of bacon, steak and chicken. Naturally, the dog is devastated that he didn’t get any of it.

Talking Dog Doesn’t Want a Cat– This video is 1:38 in length and has 2,089,745 views to date. This video was made by Jack Bias, the owner of Hangover Airbrush, Vinyl and RC. In the video, Jack is trying to convince his dog Zoe that they should get a cat. However, Zoe is having none of it and making excuses why they don’t need a cat, like cats don’t do tricks and cats are always licking.

Dog Wants Kitty– This video is 1:36 in length and has 35,128,180 views to date. This video is also done by Andrew Grantham, who did Ultimate Dog tease. In this video, Clyde wants a little fluffy kitten for a friend. Andrew talks to Clyde about visiting the pet store and Clyde’s facial expressions are hilarious! Grantham created this video as part of the campaign called Pets Add Life.

Hilarious Talking Dog Video– This video is 1:22 in length and has 2,261,596 views to date. This video was featured on America’s Funniest Home Videos and features a compilation of dogs repeating what their owners are saying, like I Love Mama, Run Around and Hello.

Mishka Says 12 Words– This video is 1:52 in length and has 19,484,840 views to date. Mishka is a talking husky who even has her own Facebook page. In the YouTube video, owner Matt Gardea trains Mishka to say an array of words including Hello, Obama, Hungry, Eat and I Love You.

I honestly can’t decide which of these funny talking dog videos on YouTube cracks me up the most. I adore the realistic “human speech” of Mishka, but that “Dog Wants Kitty” video gets me every time.

Do you have any favorite funny talking dog videos on YouTube? Tell us in the comments!