There’s nothing cuter than two dogs “smooching,” but you’re bound to wonder why dogs kiss each other at all?

Fortunately, we’re here to satisfy your curiosity and explain what compels dogs to lick each other’s faces.

Just keep on reading because you’re in for a surprise!

7 Fascinating Reasons Why Dogs Kiss Each Other

All you need is to spend two minutes around a dog to understand how much dogs love licking.

Faces, floors, clothes, or other animals –  dogs rarely discriminate when they give slobbery kisses.

Unfortunately, it’s not always easy to say why dogs kiss each other.

Kissing can mean many things, depending on the situation and what your dog is trying to communicate. It has far more layers than you can imagine.

To help you figure out your dog’s behavior, here are the 7 most common reasons why your dog is French kissing another dog!

Have you seen puppies licking their mother’s face? It’s one of the most adorable sights in the world, and you’re lucky if you’ve witnessed it.

But you probably have the wrong impression of what it means.

Many people assume that puppies lick their mother for the same reasons humans do – to show affection.

It can be a sign of love, but it also has another rather disgusting and practical purpose.

In the wild, wolf pups lick their mother’s muzzle to make her regurgitate some digested food when hungry.

It’s easier for puppies to eat predigested food when they’re transitioning to solids.

According to studies, more than 60% of breeders still observe the same behavior in domestic dogs.

So, when you see puppies kissing their mother, the little ones are probably saying, “We’re hungry, please, feed us.”

It sounds disgusting, but it’s normal puppy behavior and nothing to be worried about.

However, you should talk to your vet about when and how to wean the puppies.

You want to make sure that the little ones are getting all the nutrients they need. 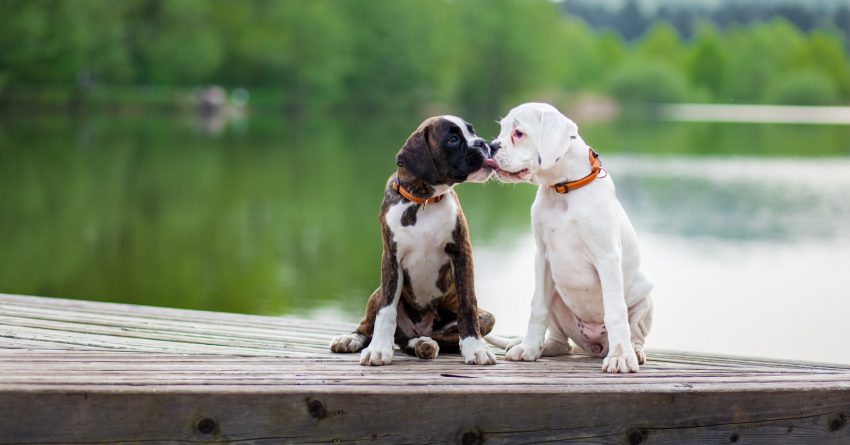 When adult dogs exchange slobbery kisses, one of the likely reasons is to establish social status and show deference.

Usually, timid or shy dogs are likely to approach dominant dogs with a submissive body language to convey that they aren’t a threat.

Licking the higher ranking dog under the chin is part of such greetings.

The same subordinated kissing might happen when one of the dogs feels vulnerable in the other’s presence.

In these cases, the gesture says, “I know you’re in charge, and I don’t want to challenge you.“

When the other high-ranking or dominant dog accepts that sign of submission, they return the kissing.

But it’s also possible that the other dog might not appreciate the kiss, and you might have to intervene.

It’s important to recognize such “kissing” for what it is and not assume that all dogs that kiss each other are friends.

Otherwise, you risk putting your dog in an uncomfortable position. 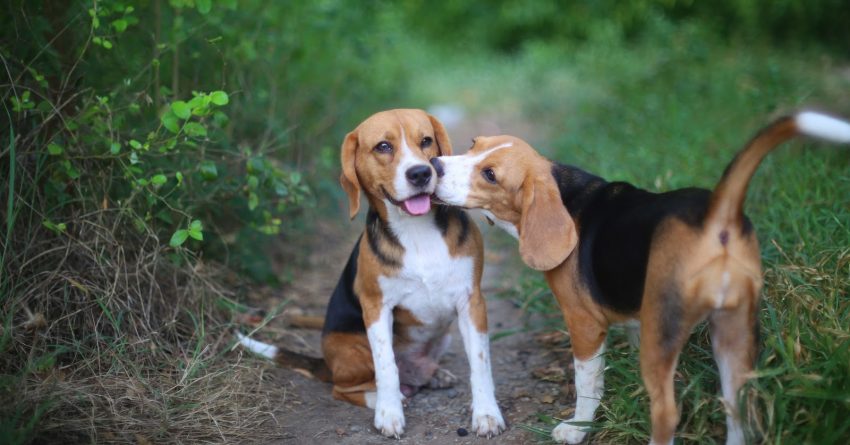 People shake hands, exchange hugs, or kiss each other on the cheek when they meet.

Dogs that know each other might also lick each other’s face as a way to say, “Hello! It’s nice to see you again,”

Usually, such behavior is observed between siblings, dogs that live together, or very close ones.

The kissing is less a matter of establishing social status and more about showing friendship and trust.

If your dogs are kissing as a sign of greeting, both dogs will be engaged and might seem rather enthusiastic about it.

When it’s subordination, only one of the dogs will initiate the kissing.

#4 The Other Dog Is Hurt

One of the weird things dogs do is lick wounds and injuries.

While many people believe that dog saliva has antibacterial properties, it’s the washing that lessens the pain and keeps the area clean.

When you notice that your dog is grooming another dog on the mouth, you might want to check the second dog for cuts around the mouth.

Dogs eat things they shouldn’t, such as rocks or poop, and might get injured without you seeing anything amiss.

However, one of your dogs might feel that the other is in pain and soothe the discomfort with a kiss.

So, watch for any excessive licking that’s not normal for your dogs. 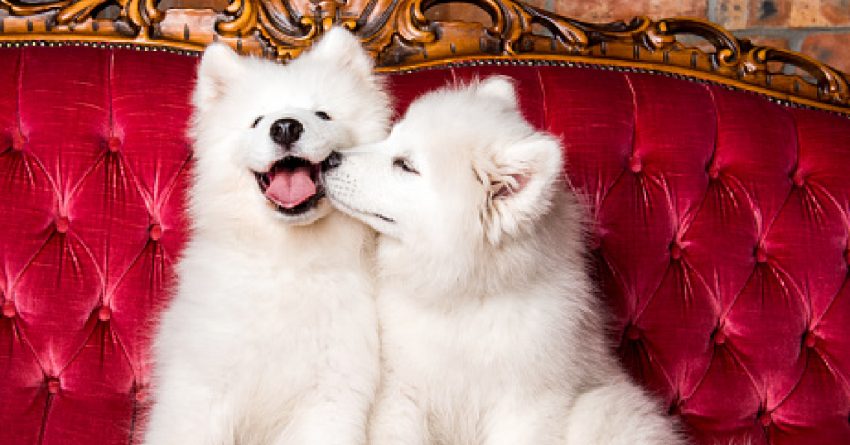 Fights might break among dogs, even when your two pets get along and are close friends.

So, if your dogs have recently had a row, they might be trying to make peace by kissing each other.

In these cases, you can think of the kissing as an olive branch that one dog extends to the other.

It says, “I don’t want to fight anymore. Let’s be friends again.”

If you notice that there’s tension between your pets, you should look for the root before it escalates into aggression.

Another common reason why dogs kiss each other is that they’re being playful and want the other dog to join the fun.

Such behavior is typical for dogs that meet for the first time, and dogs that know each other well.

You might also notice a play bow that often accompanies such dog kisses.

A play bow is that adorable position when a dog gets their butt in the air and plants their front paws on the ground.

It might seem like aggressive behavior to inexperienced owners, but you’ll notice that the dog’s body is relaxed and that the tail is wagging happily.

Interestingly, some dogs do the same when they want their human to play with them.

Finally, a dog kiss might be nothing more than a simple gesture that says, “I love you.”

Mutual grooming is how dogs show affection and how much they care for fellow dogs and their owners.

That’s because the brain releases endorphins whenever your dog kisses other dogs or you.

So, when two dogs kiss each other, they’re getting a boost of happy hormones and are enjoying the experience!

You’d better not get into their way!

Usually, the reasons why your dog kisses each other are entirely harmless and relate to determining social status, showing affection, and being friendly.

You don’t have to worry about it unless your dog is too “intimate” with dogs that don’t like such attention.

Otherwise, just enjoy this cute moment between your dogs, and don’t forget to snap a picture of it!

You never know when you’ll have a second chance.