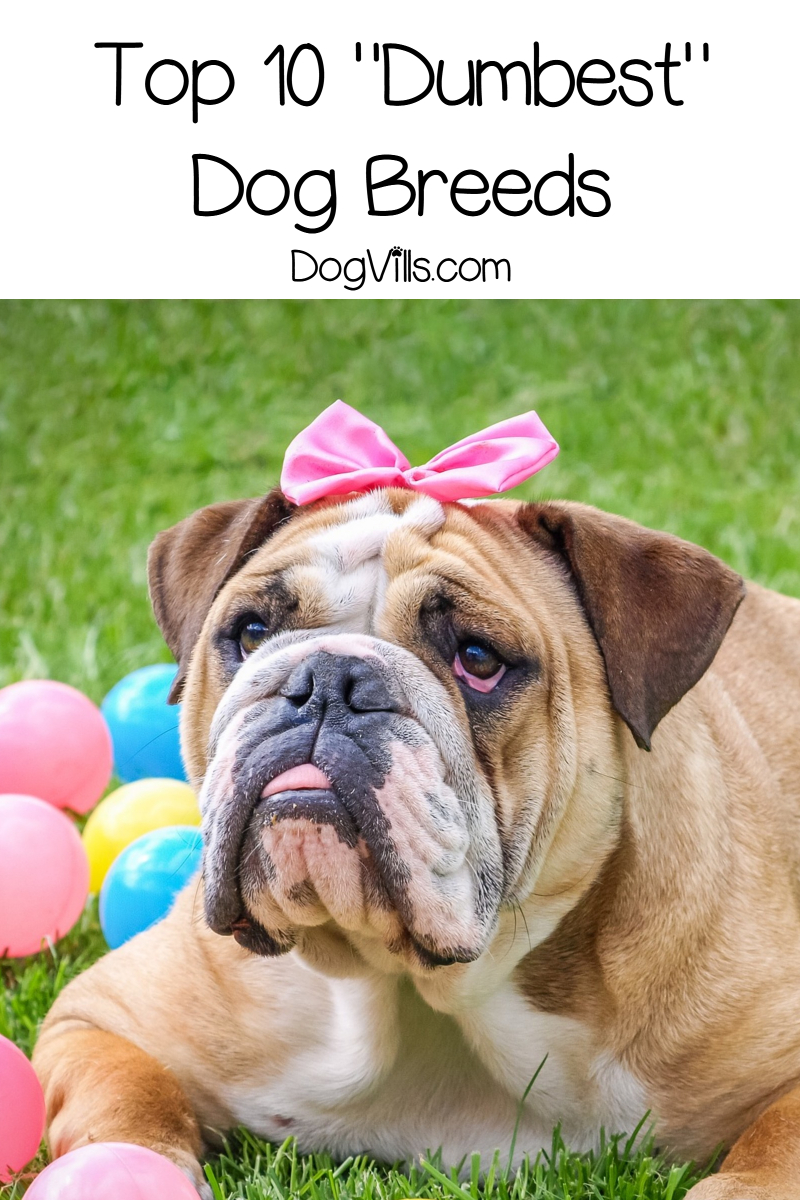 A friend of mine asked me about the dumbest dog breeds a couple of weeks ago.

I admit I was surprised because most people are interested in highly intelligent dog breeds.

So, if you share my friend’s curiosity, keep on reading to discover 10 dogs that rank lowest on the intelligence & trainability meter.

How can we estimate how smart a certain dog breed is?

However, the dog behaviorist Stanley Coren explored this subject in his book The Intelligence of Dogs. (That’s an affiliate link, FYI).

He judged how smart 100 breeds are based on three types of intelligence:

So, we’re going to take a look at the bottom 10 breeds that got the lowest scores.

But, please, don’t get offended if your dog’s on the list. I don’t think any of these breeds as “dumb,” they are just misunderstood in most cases.

Hounds are notoriously famous for being stubborn. Basset Hounds are not an exception with their selective memory, laid-back personality, and stubborn spirit.

These dogs might seem lazy around the house, but that’s far from the truth.

Once a Basset Hound catches an interesting scent, he can pursue it with a single-mindedness that is astonishing.

Moreover, Basset Hounds are not eager to obey unless there is a treat for them and can be challenging to house-train.

That’s probably why this cute pooch is considered one of the dumbest dog breeds.

But their sense of smell is only inferior to a Bloodhound’s one, so they are far more effective trackers that other “smart” breeds.

Furthermore, Basset Hounds are one of the friendliest dog breeds and loyal companions for life.

Being one of the largest dog breeds in the world, the Mastiff has quite the reputation.

But despite its mind-blowing size, a well-socialized Mastiff is a gentle giant who loves to be with his family and is miserable when left alone.

The Mastiff is also very sensitive to the emotions of his owners and doesn’t like it when there is tension in the house.

He also tends to be very protective and loyal and will never make a fuss without a good reason.

But why is this dog in the list of the dumbest breeds?

As most owners would tell you, Mastiffs are “slightly” stubborn when it comes to training and are in no rush to obey.

In addition to this, these large dogs are so calm and composed in any situation that people think them stupid.

I’m sure that many of you won’t agree with the idea that Beagles are one of the dumbest dog breeds.

These adorable pooches with their irresistible puppy eyes are one of the most popular small dogs.

That’s not a surprise because they get on with children and make excellent family companions.

Then how can they be considered stupid?

Despite their cute looks and friendly personality, Beagles are not so easy to train as many would believe.

They are scent hounds, and as such, they spend a lot of time with their nose to the ground and ears deaf to their owners’ commands.

Moreover, Beagles are so difficult to housetrain that you might need a full year before your pooch is completely housebroken.

You get why some people might take this stubbornness and single-mindedness as dumbness.

Another small dog which makes the list of the dumbest dog breeds is the Pekingese.

Once a companion of emperors and queens, the Pekingese enjoys an easy life and carries an air of dignity around him wherever he goes.

Pekingese have the personality of a big dog, so they won’t hesitate to challenge a large opponent.

They are also very good manipulators and can be very crafty when they want something.

Despite these qualities, people think them to be a little thick because they are stubborn and independent.

These dogs consider themselves to be in charge and they won’t follow your orders until you prove them wrong.

Bloodhounds inhabit in a different world than ours.

They live in a world of interesting smells and scents that we will never be able even to comprehend it.

It’s no wonder that they don’t bother listening to their humans when there are so many fascinating scents to explore.

In addition to this, Bloodhounds can be quite stubborn when they feel like it and living with them can be a challenge.

But Bloodhounds are affectionate dogs and love to be near their owner.

Another hound breed in the list of the dumbest dogs is the Borzoi. Unlike the Bloodhound, Borzoi is a sighthound.

Even the tiniest movement can trigger his hunting instinct and push him to give chase to whatever small animals have crossed his path.

Just like other sighthounds, the Borzoi is difficult to train because he keeps getting distracted by movements and sights.

Moreover, the Borzoi will chase his prey without giving much thought to his surrounding and might get hurt in the process.

That’s why some people might call this dog “stupid” and “thick.” However, the Borzoi is one of the most graceful and elegant dogs when on the move.

Chow Chow ranks high among the most adorable dogs in the world.

However, his cute, teddy-bear looks often mislead people into thinking that Chow Chow can be the perfect dog for cuddling.

If you call the Chow Chow the most unaffectionate dog, you won’t be too far from the truth.

He is proud, strong-willed, and doesn’t like people fussing, touching, or petting him too much.

In addition to this, Chow Chow is the definition of stubbornness.

He will challenge your authority every chance he gets and will try to do whatever pleases him the most.

As a result, training this pooch is difficult, to say the least.

That’s why people often assume that the Chow Chow is too stupid to understand what you expect from him.

When somebody talks about Bulldogs, I always remember the cartoon show Tom and Jerry and how the Bulldog was chasing Tom around. Don’t you?

So, why are Bulldogs on this list of dumbest dog breeds?

For once, Bulldogs are slow learners. However, when they learn something, they are not likely to forget it.

They are also greatly motivated by treats, but they tend to overeat.

In addition to this, Bulldogs can be stubborn and lazy.

This dog is probably one of the few breeds you’ll have to force to exercise. Otherwise, the Bulldog is content to spend the whole day sleeping.

Despite their representations in cartoons, Bulldogs are sweet, easygoing, and friendly but they require a confident owner.

A Basenji is the definition of stubbornness. These adorable sighthounds are notorious for being hard to train and doing whatever pleases them.

However, don’t mistake their independence and strong-willingness for dumbness.

These dogs are capable of manipulating you to their benefit and can learn everything you’re teaching them. Obeying is another matter.

They are also escape artists – they are capable of overcoming fenced yards and electric fences.

On the plus side, they are one of the quietest dog breeds because they don’t bark. However, they are not mute. Instead of barking, they yodel.

A lot of people who know about Afghan Hounds might be surprised by the fact that they are among the dumbest breeds.

Why? Because Afghan Hounds are excellent hunters capable of chasing prey without human intervention.

However, Afghan Hounds have developed a strong sense of independence. That’s why they don’t always listen to their humans or obey orders.

These dogs are also not as eager to please as other breeds and don’t crave or demand human attention.

I’ll repeat myself. Don’t be offended if your dog is on the list.

Not a single breed can be defined as dumb because each dog is unique and intelligent in his own way.

When you think about it which is smarter – obeying orders or doing whatever pleases you?

What do you think about these 10 dumbest dog breeds? How do you feel about them? Share your experience in the comments.